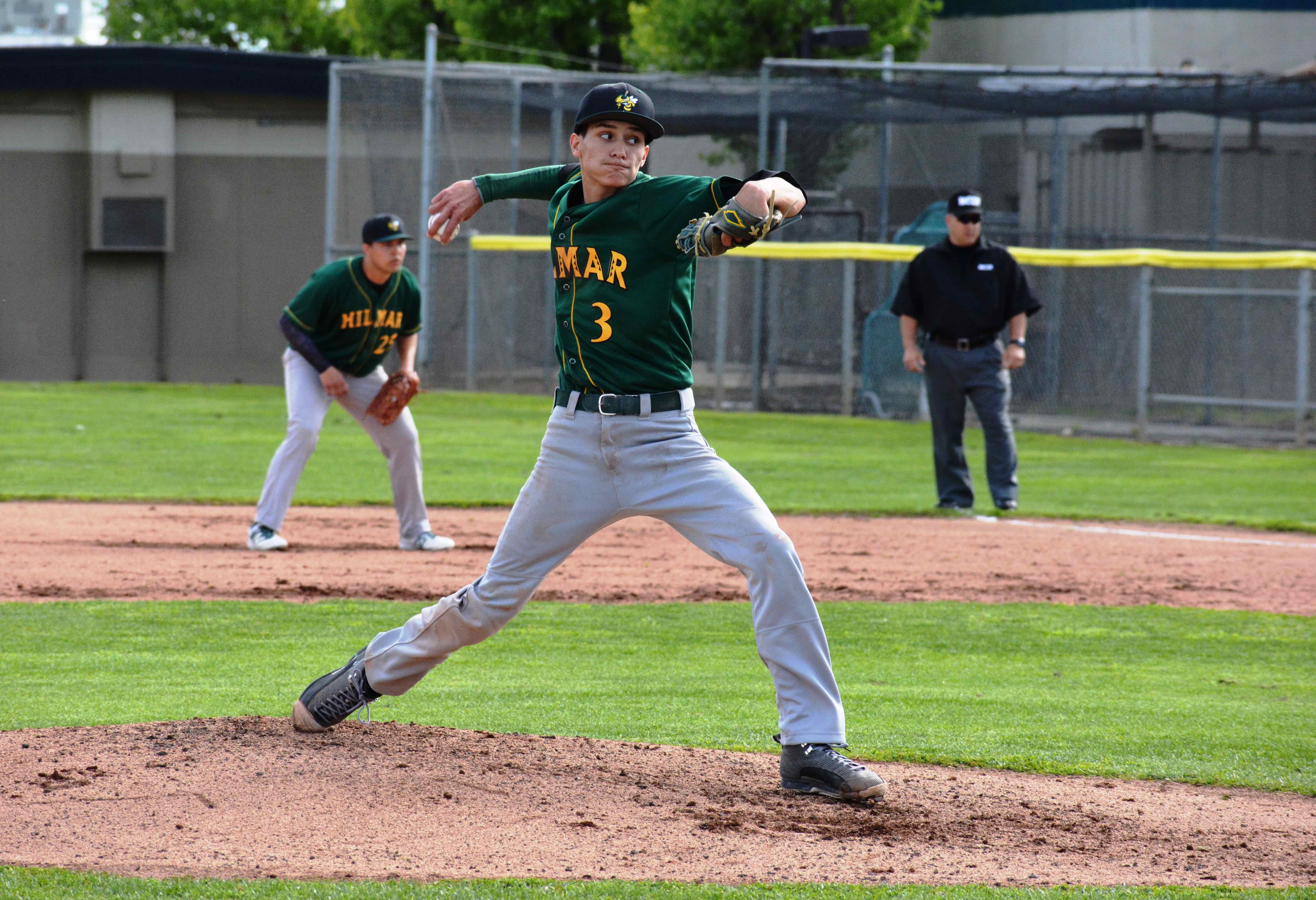 Hilmar ace Treven Crowley delivers a pitch during an 11-4 Trans-Valley League victory over Hughson on Tuesday, the first loss of the season for the Huskies. (Photo courtesy of AnnaMarie Silveira

HUGHSON — For the first few weeks of the 2019 high school baseball season, no team has been hotter than the Hughson Huskies. Chosen No. 1 in the Front Row Preps small-school rankings, Hughson opened the season with 11 consecutive victories.

On Tuesday, they ran into a pitcher who was just a little bit hotter.

Starter Treven Crowley kept Hughson off balance with a 90-plus mph fastball and sharp curveball as Hilmar defeated Hughson 11-4 in a Trans-Valley League matchup.

The teams will meet again on Thursday at 6:30. p.m. in Hilmar

“He was outstanding,” Hughson coach Charly Garza said of the Hilmar junior. “High-velocity guys are hard to hit, but when they have another pitch going for them, it’s just outstanding. He had great composure, he battled. Our goal is to battle at the plate, but he battled a little harder than we did. The best pitching performance that I’ve seen this year from an opponent, for sure.”

Crowley, who has garnered the attention of several NCAA Division I programs, struck out seven and walked four before giving way in the sixth after reach 100 pitches.

“He throws hard but he’s got a devastating breaking ball when he wants to,” said Hilmar coach Jeff Brown. “And then he’s got a good change-up to back it up, too. So, when he’s pounding the zone, his pitch count’s down, it’s tough for any team to match up.”

The Huskies got to Crowley early, when Seth Tacheira drew a walk to lead off the bottom of the third, then raced home on a double by Jeremiah Langan to make it 1-0.

The lead was short-lived, however, as Hilmar struck for five runs in the top of the fourth and four more the next inning to break the game open.

After falling behind 10-1, Hughson cut the deficit to 10-4 with three runs in the bottom of the sixth, and had No. 3 hitter Armando Espitia at the dish with the bases loaded, but reliever Sebastian Marquez induced a groundout to end the threat and any real chance the Huskies had of getting back into the game and keeping their winning streak alive.

A streak Hilmar had heard plenty about.

Both teams now stand at 2-1 in the TVL race, in a four-way tie with Escalon and Livingston behind Ripon (1-0) which made had the league by last week and beat Escalon on Tuesday.