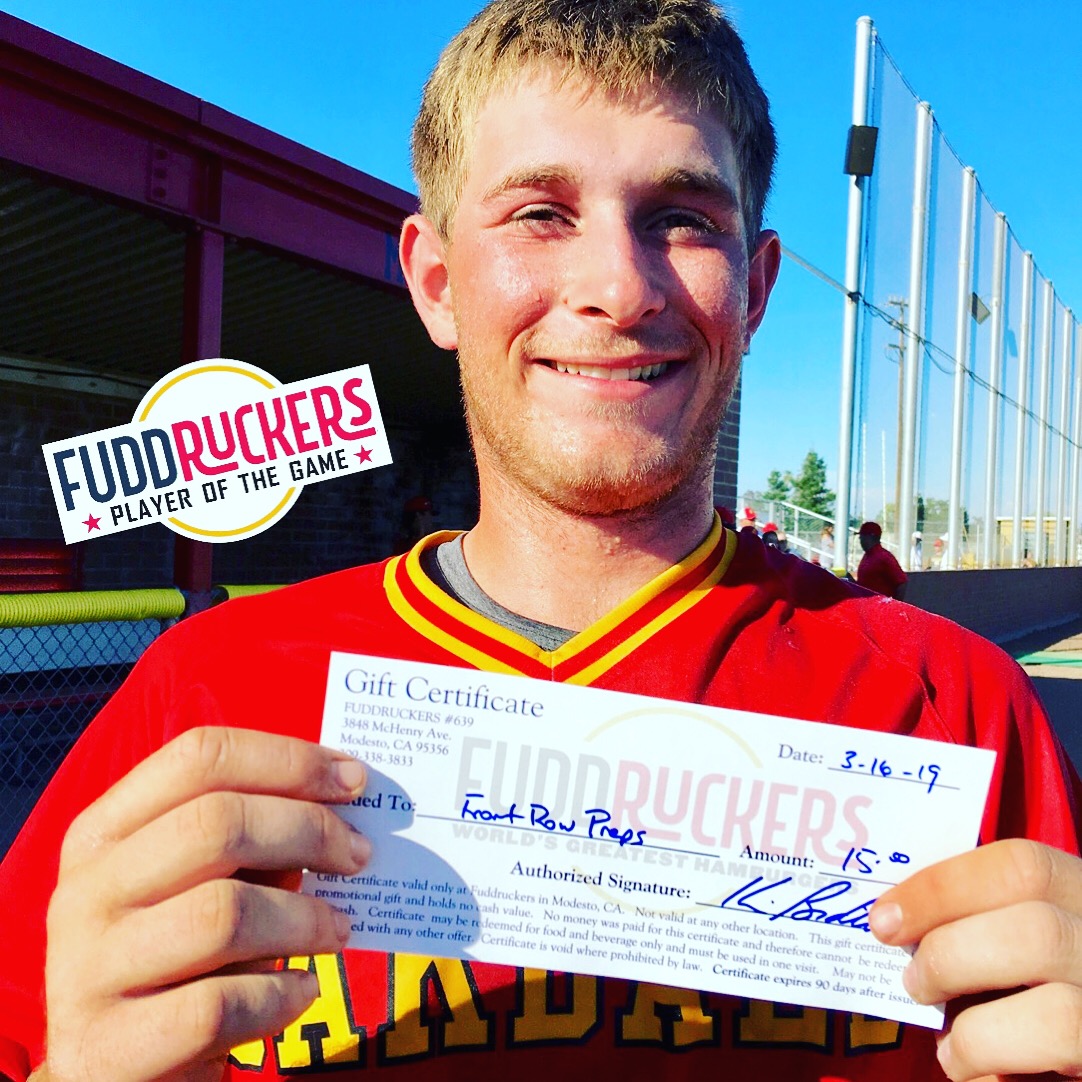 Oakdale's Austin Meeks was named the Fuddruckers Player of the Game after going 4 for 4 and finishing the Mustangs' 11-10 win over Escalon on the mound on April 24, 2019.

OAKDALE – Oakdale High junior Austin Meeks, a third baseman by trade, never had thrown to a batter this season.

Wednesday turned out to be a good place to start.

By game’s end, beads of sweat dotted Meeks’ face in the 91-degree heat. But he was cooled by an ice-water shower from his teammates, his reward after the Mustangs’ 11-10 win over Escalon to cap the Mark Dickens Invitational.

“I got out there and was throwing for fun,” Meeks said. “We had to save the arms for league.”

Meeks did everything for the Mustangs (15-6), including post-game rake-work. He went 4-for-4 at the plate, punctuated by his two-run single that whistled by the cap of Escalon second baseman Roman Gonzalez.

That hit broke an 8-8 tie in the sixth, and he later scored during the four-run outburst. Problem was, he made his season debut on the mound and had pitched since the fourth inning.

“I was gassed after that,” Meeks admitted.

Escalon (9-15), the defending tournament champion which rallied from a 7-0 deficit, did not submit easily. Nathan Roberson’s two-run double closed the margin to 11-10 and finished Meeks’ pitching debut. Marcus Juarez, Oakdale’s fourth pitcher of the day, retired the final two batters, the latter with the tying run at third and slugger Cole Gilbert waiting on deck.

Both Henry and Escalon coach Greg Largent, mindful of league games next week, leaned hard on their respective benches at the end of the three-day tournament. Seldom-used pitchers on both sides got their day in the spring heat. The result was a wild affair, a 180-degree flip from Oakdale’s taut 2-1 decision over Escalon on Tuesday.

Gilbert, hard to miss at 6-foot-3 and 250 pounds, pushed Escalon in front 8-7 in the sixth with a towering two-run homer over the 344-foot mark in left. Oakdale responded in its half, however, with Nathan Womack’s leadoff double, a single by Max Moore, Meeks’ big hit and a sacrifice line-drive by Jacob Elting.

Escalon, which has enjoyed dizzying success for over a decade, will not qualify for the postseason for the first time in 18 years.  That said, it twice extended Oakdale this week after a 15-2 loss to Turlock.

“How we bounced back from the 15-2 shellacking was a step in the right direction,” said Largent, completing his 16th season as coach. “But it does not show up on the win column.”

The Dickens tournament, named for the 1981 Oakdale grad and longtime baseball coach who died after a bout with cancer in 2009, switched to a round-robin event of sorts after the late cancellation by two schools. Oakdale, which began Wednesday by mercy-ruling Beyer 14-3, went 4-0.

“We want to win out the rest of the way so we can get a good seed in the playoffs,” Meeks said.