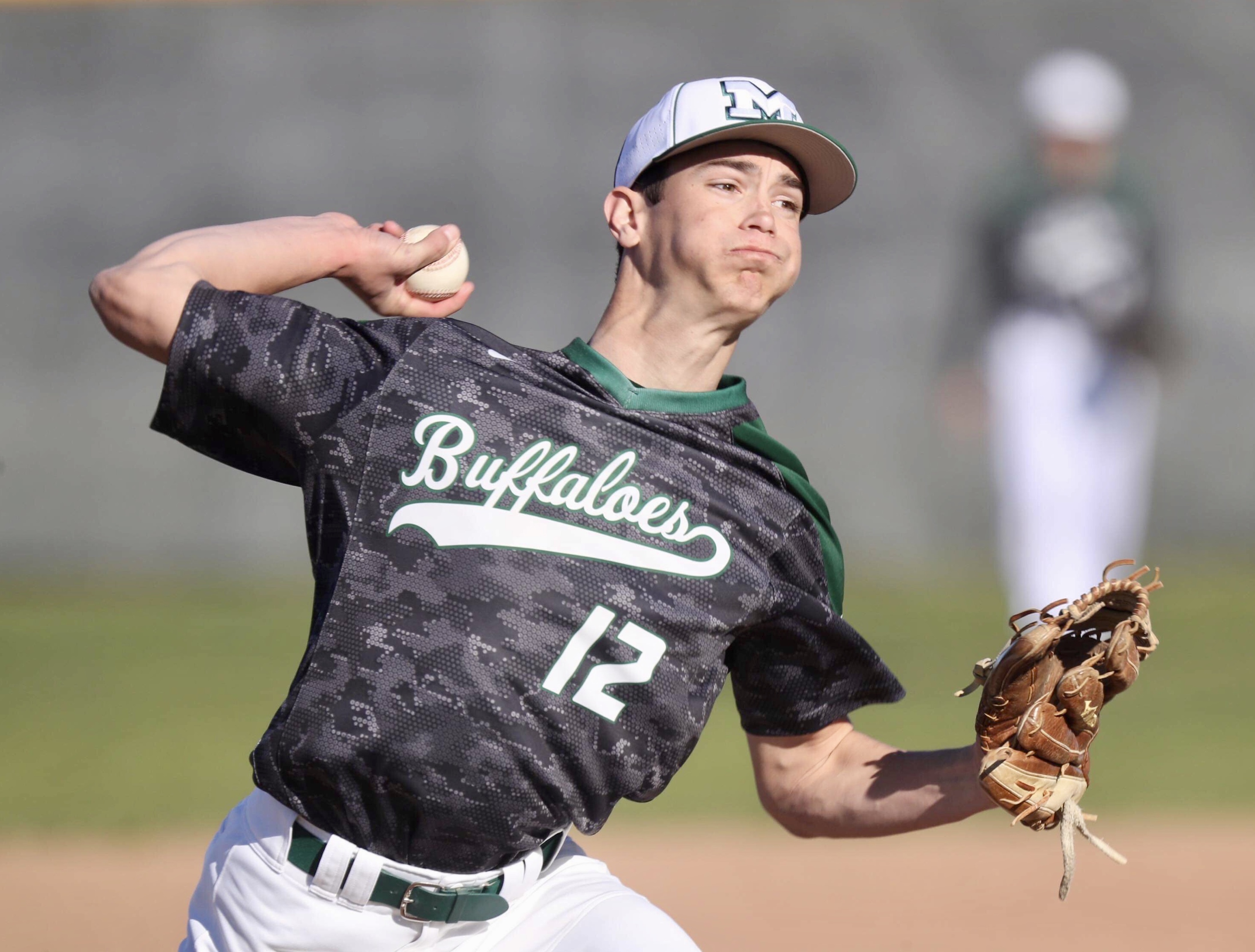 Manteca High right-handed pitcher Ryan Ward has verbally committed to the University of the Pacific in Stockton. (Wayne Thallander)

MANTECA — Ryan Ward has committed his future to the University of the Pacific baseball program, but good news Manteca High football fans, the talented junior isn’t shutting the door on his other love.

Ward said he will return to the huddle in the fall for the six-time Sac-Joaquin Section champions, reprising his role as quarterback. In fact, the Pacific coaching staff has encouraged him to play football, he said, because it will keep the prized recruit active.

“I’ve been getting that question a lot,” Ward said. “I’m still going to play football. They’re down for me playing. They like that I do play football. It keeps me active.”

Had Pacific coach Ryan Garko and his staff thought otherwise, Ward said he would have respected their concerns and skipped his senior season.

“If they did, I would totally respect that,” he added. “Baseball is my priority. If it did come down to that decision, I guess that’s what it would have been.”

Though verbal commitments aren't binding, Pacific has received a commitment from one of the region’s top pitching prospects. Ward is a third-year varsity starter with a career record of 19-6 with a 1.83 ERA. He burst onto the scene with an 11-win campaign as a freshman, earning Cal-Hi Sports all-state honors.

Under Garko, the Tigers have mined the southern half of the Sac-Joaquin Section for talent. There are six players on the current roster from the region south of Lodi, including Oakdale catcher Bryce Kirk. Along with Ward, Pacific has also received a commitment from catcher/outfielder Jacob Weiss of Atwater.

Ward said he spurned offers and interest from Arizona, Baylor, San Diego State, Nevada, Long Beach, Fullerton and Oregon. Some of the offers he received from schools were time-stamped, he said. Ultimately, he chose Pacific for the comfort with coaching staff, location and trajectory of the program.

“Education-wise, it’s a good fit for me. They have a great program and it’s doing good things right now,” Ward said. “I have a good relationship with the coaches and I like the atmosphere at the school.”

He expressed a desire to make his commitment early, alleviating the pressure that comes with recruitment so he could focus on improving his game and leading a VOL and Sac-Joaquin Section playoff charge by a relatively young Buffalo baseball program.

Ward is a team captain, along with senior shortstop Alex Gouveia.

“I was ready to make this decision,” he said. “Now it’s just about getting better and not worrying about the process anymore. I can focus on me. It’s nice to finally relax and know you have a spot.”

Manteca has won six of its first nine games, despite graduating seven seniors from last year’s team. Ward is 2-1 with a 3.00 ERA and 19 strikeouts in 14 innings. On Friday, he earned the decision in a 16-1 rout of Merced.

“We’re young, losing (seven) seniors last year with a lot of JV kids coming up,” Ward said. “Having a lot of preseason games has helped us get adjusted to the speed.”