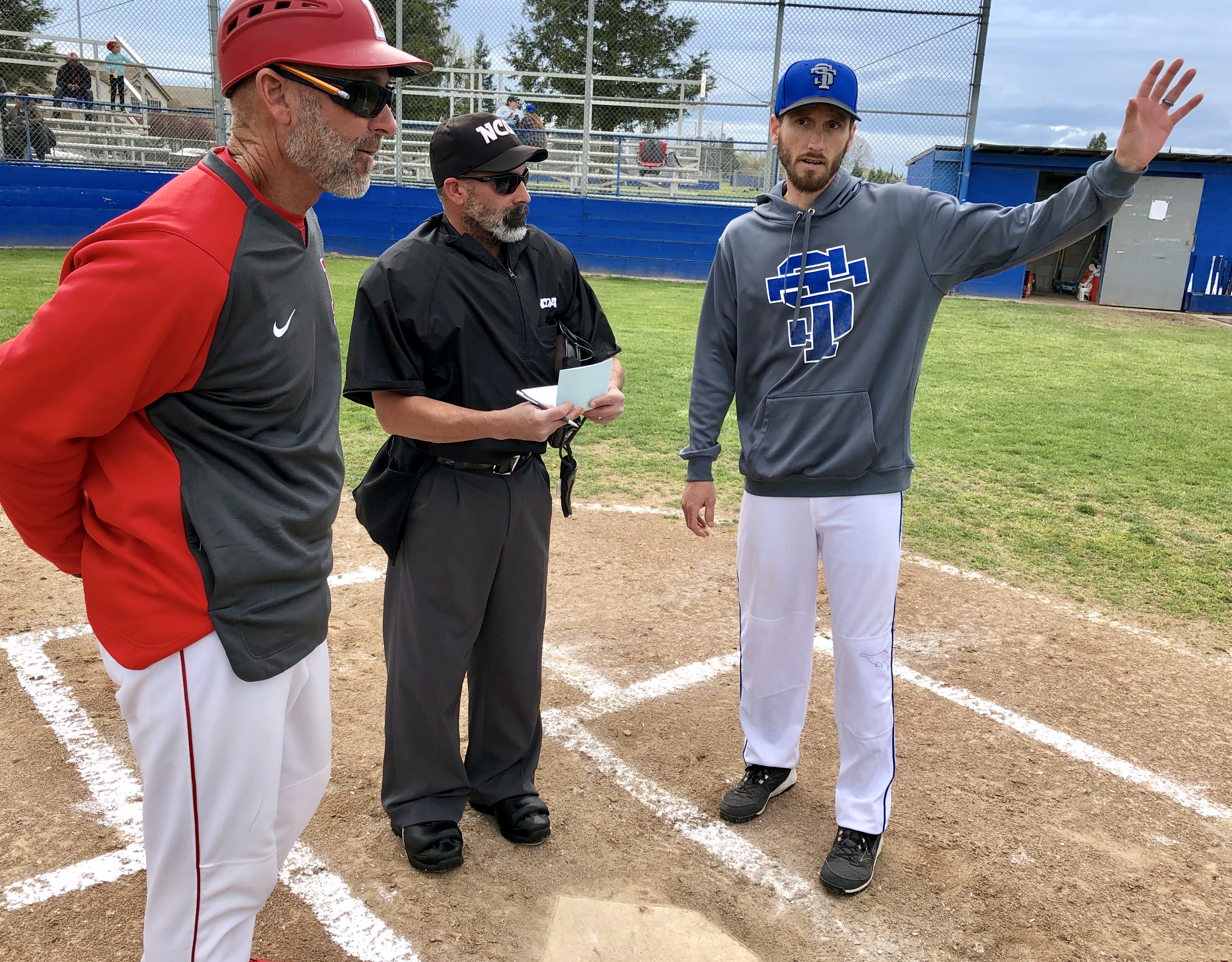 Travis Thomson (right) is in his first season as coach at Sierra High, where he's replacing his father Jack Thomson, who won 607 games in a career that spanned two high schools.

MANTECA — Jack Thomson arrives two innings into the game, unfolds a lawn chair and kicks his feet out down the left-field line. The hall of fame coach is wearing boots and jeans on a game day, an odd sight for anyone familiar with Sierra High baseball.

These days, Jack is comfortably retired, entrusting the Timberwolves, a program he raised from the roots, to his son, another molded and shaped under his watch. He is content down the left-field line, clutching his wife’s hand and entertaining fans with his travels and war stories.

To say Travis Thomson feels the enormous weight of his father’s legacy would be an understatement, but the former lower-level coach attacks the job with one of baseball’s great approaches: Keep it simple.

“I’m not going to lie to you and say no, but our focus is playing the game and teaching the game,” Travis said of father's long shadow after an extra-inning loss to Lodi on Monday, which completed the non-league portion of the Timberwolves’ schedule.

Well, not all of it.

Reminders of his father’s storied coaching career are everywhere. They live in conversation and the relationships Travis forges with coaches throughout the Sac-Joaquin Section, and they exist on his staff. In his first season at the helm, Travis has surrounded himself with some of his father’s trusted assistants: pitching coach Greg Wilson, infield coach Marshal Swift and lower-level coach Richard Boyd.

“I lean quite a bit on my assistant coaches: (hitting coach Eric) Texeira, Swift and Wilson,” Travis said. “They do a lot behind the scenes and help out. Shoot, without them, it would be a different story. We’re a good team together.”

Jack won more games than any coach in the southern half of the section during a career that spanned two high schools and multiple decades, including the first 23 in Sierra High School history. He finished his career with 607 wins — second most in section history — and five Valley Oak League titles, and he groomed four Major League Baseball draft picks.

Even in retirement, Jack remains an influential voice in the dugout. He helps with the lower levels and fills various roles with the varsity team. Mostly, though, he serves as the first phone call for Travis, whose coaching career is off to a running start.

The Timberwolves have won eight of their first 12 games and begin VOL play on Wednesday with a home-and-home series against Central Catholic. Sierra is No. 5 in the FrontRowPreps.com large-school poll.

“He still gets the daily phone call,” Travis said with a grin. “That hasn’t gone anywhere. He works with our catchers at all levels. Whatever we need that day, I don’t have to make sure he knows what he’s doing or ask. … I think we’re utilizing him well.”

Standing in the third-base box, Travis bears a striking resemblance to his father. He speaks with a low-and-slow cadence, a tone infused with patience and carrying a message spiced with a knowledge that belies his age.

Only version 2.0 comes with a beard and far fewer wins, but the approach is the same. It’s coded in his DNA. Travis believes success is tied to the simplicity of the game — throwing the ball, catching the ball and hitting the ball — and won’t run a program that complicates or strays away from those fundamentals.

“Our focus is at the plate, the approach, getting runners and getting guys over, and I think we can pitch well. Coach Wilson does a great job with our pitchers,” he said. “That’s the big foundation. We’ve got two really good middle infielders, a catcher and pitchers, and most of our outfielders can run, too. We have the tools. Now it’s (about) honing it all in and doing the little things right. That talent is there.”