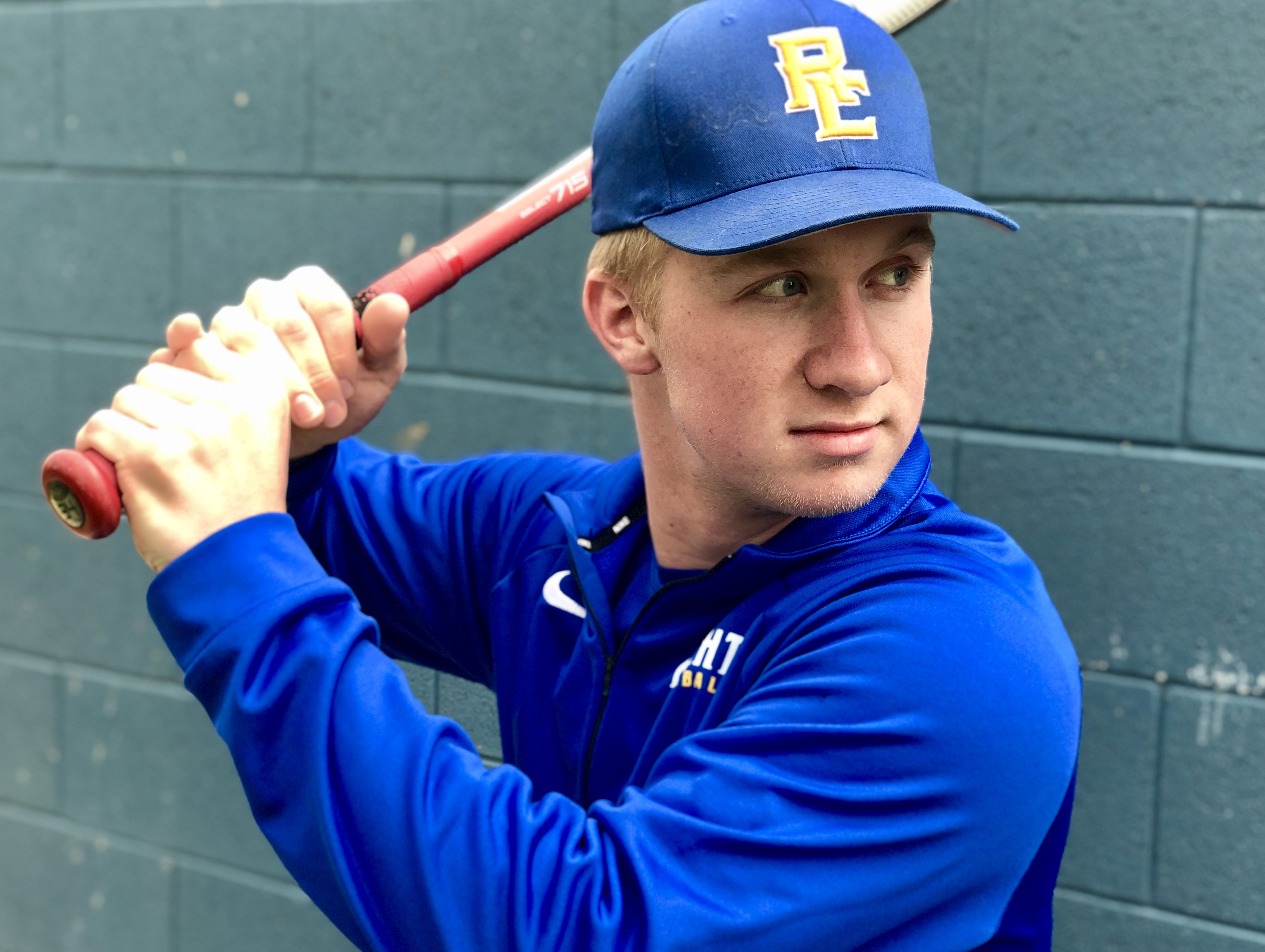 Ripon Christian junior Nolan Lingley had his second shoulder surgery in nearly three years in the fall, but it hasn't kept him off the diamond. Lingley has appeared in all eight games and leads the Knights in several hitting categories.

'Nothing is going to keep me from that field.' He draws strength from surgeries.

RIPON — Ripon Christian junior Nolan Lingley insists his shoulders can bear the weight of the school’s football and baseball programs, even if his medical records suggest otherwise.

You see, Lingley’s left shoulder — his non-throwing shoulder — is twice repaired, the result of a series of dislocations that have interrupted his first three years on campus. There are 11 inch-long incisions, five from one surgery and six from the other.

“It feels stronger than ever,” he says.

To better understand today’s position of strength, though, you must first understand the depths of his disappointment and pain.

On the eve of his debut as a freshman with the varsity baseball team, Lingley’s troublesome shoulder popped out of the socket. He had suffered dislocations before, but this one was different. He wasn’t able to reset the shoulder — as he had done so many times before — and was forced into the ER.

Tests revealed a torn labrum, and within weeks the promising young talent was under the knife, his freshman baseball and sophomore football seasons lost to surgery.

“It was a tough experience with a lot of learning along the way,” said Lingley, a quarterback and middle infielder. “Never did I dream it would happen again.”

Fast forward to Week 3 of the 2018 football season: Lingley is entrenched in a quarterback battle with Cade Alger and the Knights are soaring up the regional small-school poll, despite a rotation under center. In the days leading up to a pivotal Southern League showdown with Waterford, Lingley felt looseness in his surgically-repaired shoulder, but played anyway.

“There was a QB battle going on,” he said, “and I didn’t want to miss anything.”

A slippery dual-threat, Lingley fled the pocket, leaning into a tackle with his temperamental left shoulder. When the contact came, his shoulder slipped out of place. Lingley winced, his pain spiced with the frustration of cruel fate.

His season was over.

As he waited in the same emergency room he visited two years earlier for his initial surgery, Lingley processed the severity of the situation.

“Is my football career over? Am I going to play baseball again?” he wondered. “It was a lot. It makes you appreciate being healthy. Seeing my friends and teammates, guys who have never been hurt, I’m happy for them and I want to be in that spot.”

Lingley doesn’t believe he’s a star-crossed athlete. He hasn’t lost hope or confidence in his abilities ... or his body. If anything, these moments of weakness have strengthened his resolve. Injuries may have slowed his recruitment and limited his play time, but they haven’t diminished his talent or ability to perform at a high level.

This spring sings to his potential.

Lingley pushed his rehabilitation at every opportunity, shrinking a five-month recovery window into four, and was cleared by his surgeon just in time for baseball.

“Since it was the second one, we weren’t trying to rush it,” he said, “but being a big part of the high school team, I wanted to get back for my teammates. I was consistent with it (rehabilitation), and we decided if I could get back ahead of schedule, we’d go for it.”

Ripon Christian (5-3) is reaping the rewards.

The Knights began Southern League play last week with an 18-1 victory over Delhi, setting up this week’s home-and-home series with Waterford, which began with Wednesday's rainout. Lingley has been a catalyst through the first month of the season, ranking among the team leaders in nearly every offensive category.

Lingley is also 1-1 with a 2.80 ERA and one save. He is second on the team in innings pitched and strikeouts.

After two surgeries, DeVisser feared Lingley’s days as an athlete might be over. Today, he marvels at his perseverance and potential.

“It’s not about my program, it’s about the kid,” DeVisser said. “I wondered, ‘Is that the last time he’s going to step on the football field or baseball diamond,’ because it’s the same shoulder? You feel for the kid and hope he can get back on the field someday.”

He’s back with no plans of slowing down, either. Despite his parents' obvious concerns, Lingley says he will play football in the fall, pushing Jacob Van Groningen for the starting quarterback job.

The Ripon Christian football team is coming off a historic campaign. The Knights won 12 consecutive games to start the season and reached the Sac-Joaquin Section Division VI final by knocking off top-seeded Modesto Christian inarguably the biggest win in school history. In the final, Ripon Christian was dusted by Hilmar, 57-14.

“Nothing is going to keep me from that field,” Lingley said. “It’s going to be fun. After last year and having an opportunity to be the starting quarterback, this year I hope to take the job on my shoulders and lead us back to where we were last season.”