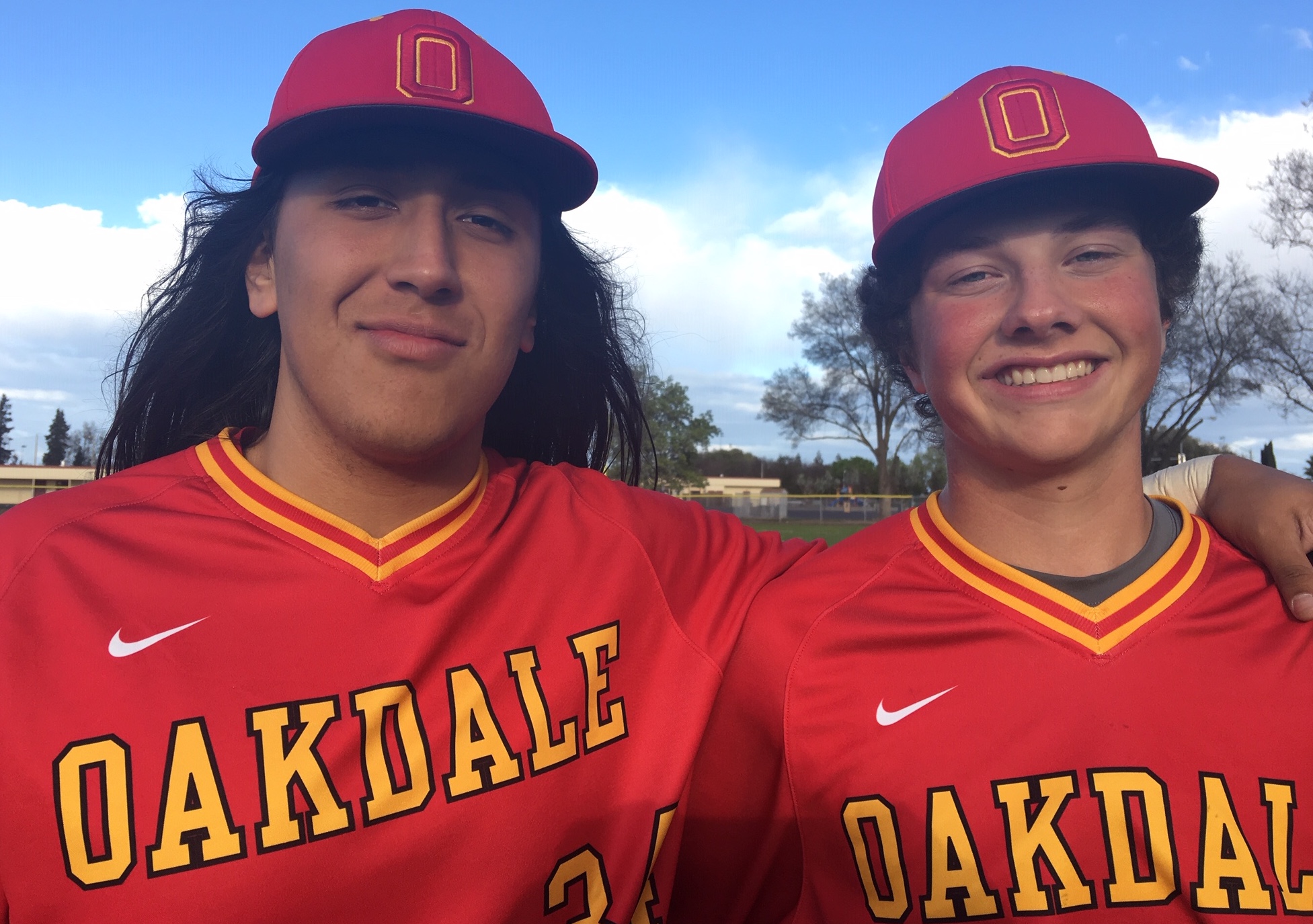 MANTECA – The Oakdale High Mustangs, the two-time defending Valley Oak League champions, will not give up their throne easily.

That was the lasting impression from Wednesday afternoon’s VOL opener, decided by two seventh-inning runs for a 3-1 Oakdale victory over East Union.

Jacob Solorio, one of Oakdale’s five senior starters, rifled a 2-2 fastball on one hop past diving second baseman Daniel Ruiz for the two-out go-ahead hit which scored Josh Gerber. Austin Meeks added the insurance run with the game’s only extra-base hit, a double to left-center.

“I had to come up big,” said Solorio, who atoned for an early-game strikeout with the bases loaded.

Winning pitcher Brett Maddock (3-1), armed with the lead, struck out three in the seventh for his complete game. The righthander, showing off a breaking ball he deployed with confidence in all counts, finished with six strikeouts and allowed only three singles.

“It (the breaking ball) works well with me,” Maddock said. “I always feel I can throw it for a strike.”

Thunderclaps and rain nearly scuttled the game before it started at Agostini Field. The storm gave way to a chilly – but dry – rest of the afternoon and a crisp game settled in less than two hours.

Oakdale (7-3, 1-0) smacked seven hits but scratched for its runs. Bunts by Gerber and Dominic McDonald triggered the seventh-inning rally.

Earlier, the Mustangs took a 1-0 lead in the fifth when McDonald – running from second on a 3-2 pitch – didn’t stop and scored with a slide on Maddock’s groundout to shortstop.

East Union (8-4, 0-1) answered with defense and its own small-ball.  The Lancers executed a double-steal for a 1-1 tie in the sixth. Zach White broke for second and drew a throw, giving sophomore Jaydin Alvarez just enough time to dash home from third.

The play encouraged first-year coach and 1994 East Union grad Gene Ballardo, who coached Manteca from 2008 to 2013. Ballardo also liked the hustle from centerfielder Cameron Ceja, who kept the game scoreless in the second inning with his all-out dive in right-center to rob Meeks.

“We built that foundation (at Manteca) and they ran with it from there,” Ballardo said. “We hope to do that here.”

East Union starter Fernando Segura (2-1) matched Maddock until the seventh. In the fourth, the righthander ducked for cover while he reached to snare Gannon Davis’ harsh line drive.

"He (Segura) dealt, but I have to tip my cap to their guy (Maddock)," Ballardo said. "He was throwing that curve for strikes on 3-2. That was impressive."