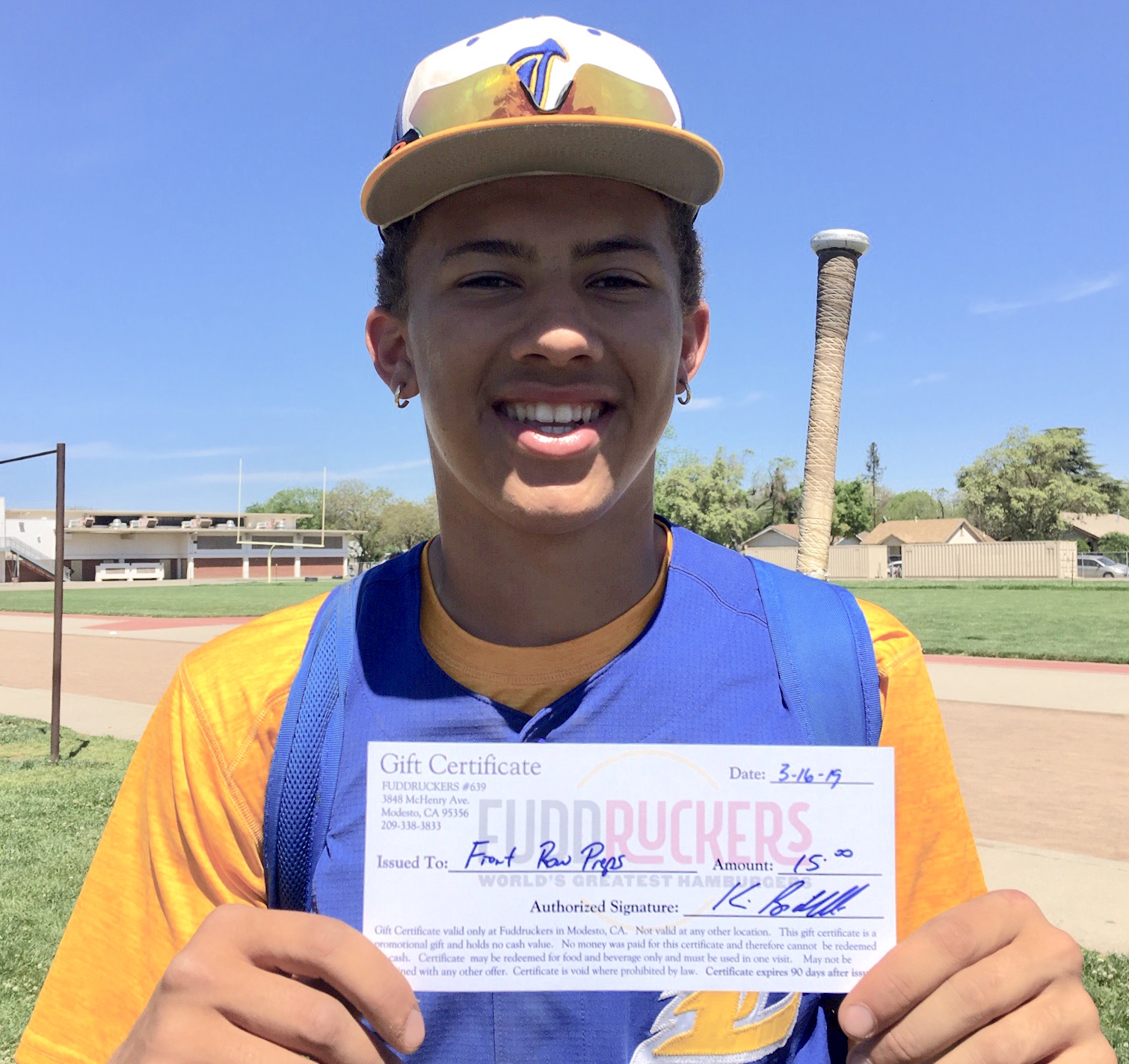 Linden's Tyler Rathjen earned the Fuddruckers Player of the Game honor after belting a game-tying two-run home run with two outs in the seventh inning against Modesto at the Dick Windemuth Easter Tournament on April 23, 2019.

Minutes after he launched a three-run go-ahead homer, Soria – the Panthers’ catcher – dropped a potential game-ending popup behind the plate. Linden’s Tyler Rathjen capitalized by slugging a two-run homer over Streeter Field’s enticing porch in left, and the teams soon shook hands after a topsy-turvy 8-8 time-limit tie in the 50th Dick Windemuth Easter Tournament.

“The pressure got to me,” Soria admitted. “It’s not a loss, but I wish we could have kept playing. You gotta walk away and eat it.”

Credit Soria for candor. The Panthers’ backup catcher – freshman Cole Prokes works most games – was exhausted by game’s end. Only moments before Rathjen’s blast, Soria absorbed a painful foul tip off his elbow, leaving a purple welt as a parting gift.

He had enough energy, however, to swat the game-changing bomb which turned a 6-4 Modesto deficit to a 7-6 lead. Soria’s third homer of the season, which followed a crisp leadoff single by Adam Perez and a Linden infield error, sliced over the batting cage in center. Linden walked Soria in his three previous at-bats.

The Panthers (6-14-2) added another run on Mitchell McGinnis’ RBI single. McGinnis, Modesto’s fourth pitcher of the game, would have retired the Lions in order if not for Soria’s ill-timed error.

“R.J. is not used to playing catcher all the time. We just had to give Cole a break this week,” Modesto coach Daryl Galloway said. “He (Soria) is in the lineup for his bat.”

The tie was Modesto’s second in as many days at the Windemuth, named for the iconic former coach at Modesto and Grace Davis. Time limits are enforced to fit the eight-team two-pool event into a four-day slot, hence the Panthers’ awkward ties.

All tournament games are contested at Streeter, which means those shallow dimensions in left will go far to decide the eventual champion.

“That’s what happens when you have a 265-foot fence,” said Galloway, who’s witnessed more than a few field-induced flip-flops in his 14-year coaching tenure.

Modesto jumped to a 4-0 lead, but Linden countered with the next six runs for a 6-4 lead. Conner Friedman stroked three hits and also contributed solid relief pitching until the seventh.

Later in the day, Kimball clinched the Red Pool title with a 4-3 win over Hughson. Modesto meets Kimball on Wednesday at 4:15 p.m.