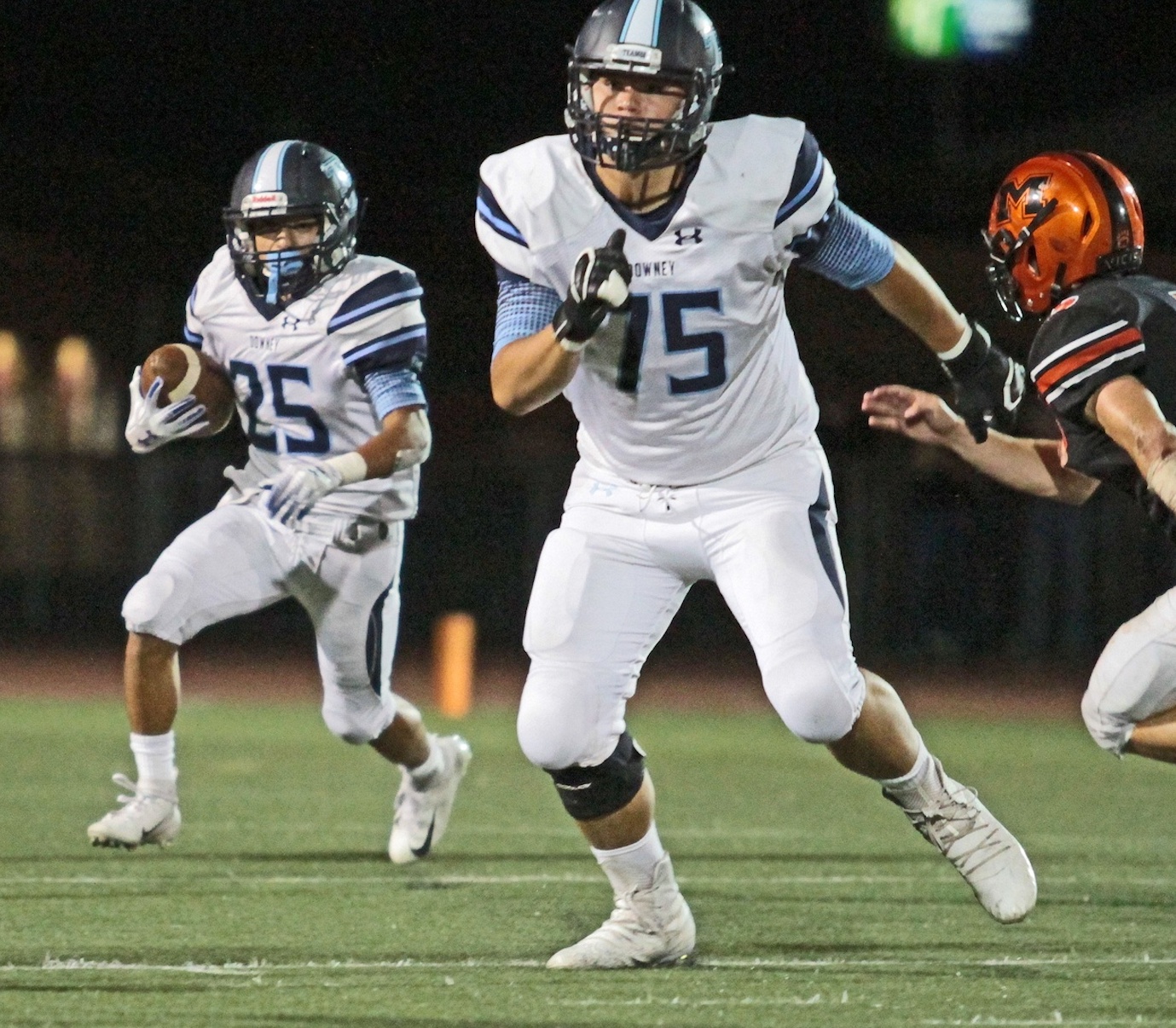 Downey running back Robert Rivera (25) follows the block of Logan Wong during a come-from-behind victory over Merced on Sept. 6, 2019. (Daniel Harris Photography)

A Friday first: Escalon and Downey engage in Knights' homecoming

The Downey High Knights and the Escalon Cougars never have met in a varsity football game – until Friday night.

It’s an unusual matchup, for sure, but one that promises some excitement. Escalon, the Trans-Valley League power that is No. 1 in FrontRowPreps.com’s small-schools rankings, relies on its punishing Wing-T. Downey wheels in the area’s most lethal passing attack.

Another thing: It’s the only collision of 3-0 teams this week in the Sac-Joaquin Section. Kickoff for Downey’s homecoming game is 7 o’clock at Chuck Hughes Stadium.

“There’s been a lot of teaching and a lot of learning going on,” Escalon second-year coach Andrew Beam said. “Downey does more things than any team we’ve faced.”

Beam and Downey coach Jeremy Plaa agreed to a one-off contract, the Cougars’ final non-league test before their TVL showdown Sept. 27 at Hilmar.

The game actually packs more intrigue than the on-paper run-first Cougars vs. the pass-first Knights.  For starters, Escalon has shown a balanced offense with quarterback Ty Harris’ seven touchdown passes. Downey answers with the relentless 150-pound running back Robert Rivera, who’s already rushed for 343 yards and has scored nine TDs (eight on the ground).

“I think it’s a classic matchup,” Plaa said at Monday’s meeting of the Modesto Quarterback Club. “Escalon is a good program and has some big guys. We’re expecting a tough game.”

Escalon has rolled to all three victories, including last week’s 35-13 win over Sonora. Conversely, Downey has rallied from behind twice to beat Manteca 54-48 in overtime and, last week, 34-27 at Merced.

The Cougars’ chances diminish if they try to match touchdowns with Downey. Keeping the ball away from the Knights, ranked fourth in the FrontRowPreps.com’s large-schools list, probably is their key.

“It’ll be a tremendous test for our kids. We’re not afraid by any means,” Beam said. “It will prepare us for the TVL and potentially for the playoffs.”