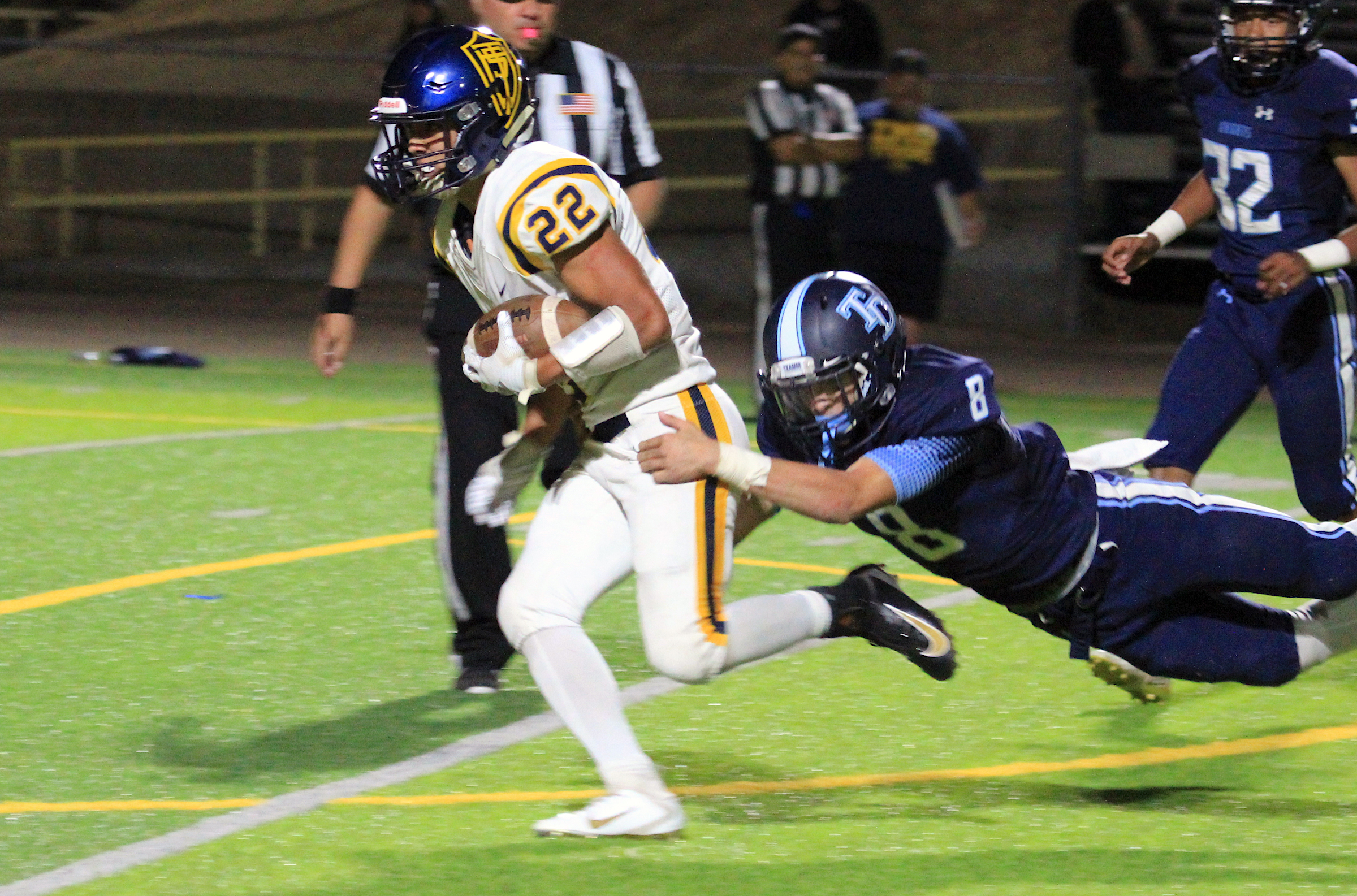 No. 2 running back carries the No. 1 team to victory in its conference opener

MODESTO -- In practice or the weight room, over the summer and into the fall, Turlock running back Josiah Gonzales has never let teammate Anthony Frias out of his sight.

Such is the life of a driven second-stringer.

For six weeks, Gonzales has trained in relative anonymity, anxiously awaiting an opportunity to step out of Frias’ long shadow. That chance came on Friday in the Central California Athletic League opener at Downey.

Gonzales had a career-high 29 carries for 229 yards and three touchdowns as the top-ranked Bulldogs overcame a scary injury to their star running back and pulled away from No. 6 Downey, 44-27.

“As I’ve been saying to myself all season: Just wait for the opportunity,” said Gonzales, a promising 5-foot-11, 170-pound junior who blends speed and power. “I’m the second-string behind Anthony Frias, who is an amazing runner. How he got hurt, that’s nothing I’d wish for anyone. I had to step up and keep the team going.”

Frias suffered an apparent neck injury in the first half. He left Chuck Hughes Stadium in an ambulance with 3:15 left in the second quarter. Led by Gonzales’ inspired effort, Turlock rallied around Frias and seized control of the CCAL title race with electric finishes to the first and second halves.

The Bulldogs outscored Downey 34-13 in the second and fourth quarters.
Gonzales spun in from the 6 with about a minute to go to give the Bulldogs a 24-14 advantage at the intermission, and then tacked on another score as the reigning CCAL champions closed with a 20-0 blitz.

“He’s worked his butt off all off season to have this year. It was really unfortunate to have that happen. I’m still bummed out about it. It makes me sick to think about that. I hate when my guys get injured,” coach James Peterson said of Frias. “As far as Josiah goes, I’m really happy for him because I know he’s worked just as hard. He’s got a lot of heart.”

Gonzales proved masterful at the straight-ahead run, one of Frias’ strengths. He was knocked for a loss just once and had seven runs of 11 or more yards, including a 54-yard touchdown run on the Bulldogs’ second play from scrimmage.

“I’ve missed playing football,” Gonzales said. “Getting bumps and bruises. I was telling the line, let’s shove it down their throats on every play. If I get the ball, let’s rush it up and down. I really wanted it and tried showing out as best as I could.”

Downey hung with Turlock deep into the second half.

Quarterback Bryce Gouker showed his moxie, evading the Turlock rush for much of the game. He completed 26 of 38 passes for 338 yards and three touchdowns. His ability to keep a play alive thrust the Knights into the lead for the first time with 9 minutes left. As the pocket collapsed around him, Gouker stepped into the flat and flipped a jump ball for Lawrence Harris near the pylon. Harris secured the ball at the edge of the end zone to give Downey a 27-24 lead.

It was short-lived, though.

Turlock answered on the next possession. Holden Baldwin raced through the depleted Downey secondary for a 42-yard touchdown, triggering the Bulldogs’ scoring blitz.

Downey had no answer. Vinnie Gasca and the Turlock defensive front vanquished the Knights’ comeback hopes. Gasca, a senior middle linebacker, had two sacks in the fourth quarter and 4.5 for the game. Downey didn’t help its cause with a pair of unsportsmanlike penalties that negated positive plays on its final two drives.

After starting the season 3-0, Downey has lost three straight, a stretch that began with a loss to the region’s other No. 1-ranked team, Escalon of the Trans-Valley League. The Knights travel to Enochs next Friday.

Turlock returns to Joe Debely Field, where it will host Modesto.

“That was our big goal,” Gonzales said. “We wanted to show them that we are Turlock football. We’re not in the same league as them. We have a different type of football.”