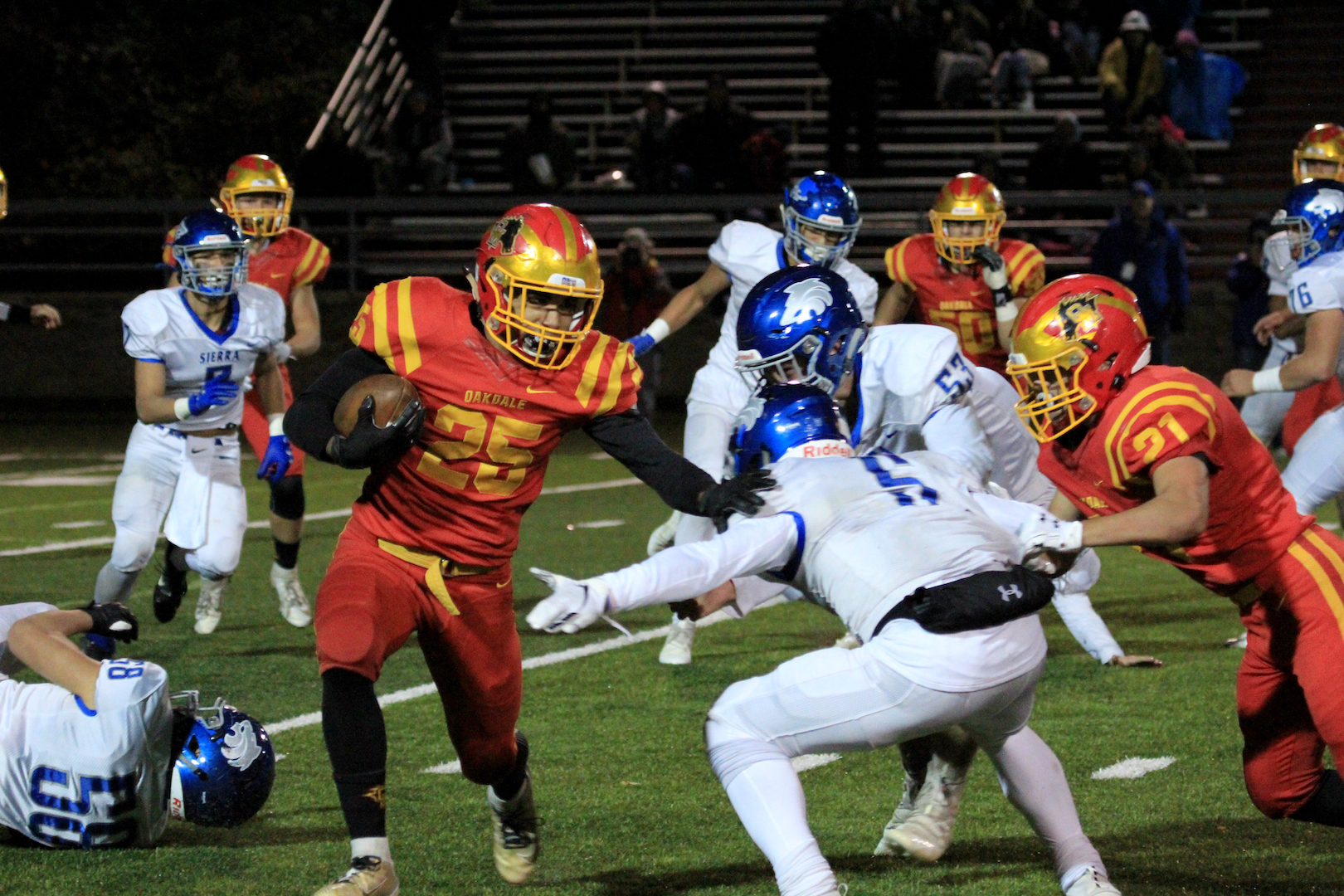 Much has been made of the remarkable achievements by the Trans Valley and Valley Oak leagues, which produced four Sac-Joaquin Section champions this season.

But what about a single city that produced two?

Manteca can take a deep bow, thanks to the Division III title by Manteca High and the DIV blue banner earned by Sierra. Their victories have carried them into the CIF Northern California Regional finals on Saturday night.

Manteca shared the VOL title with Central Catholic and Sierra, but the Timberwolves – who finished fourth -- avenged an earlier 38-14 loss to Oakdale with a ringing 22-19 upset win last week for the section title. Sierra’s victory at the Corral followed a semifinals win over 2018 section and state champion Rio Linda.

Sierra, coming of age under third-year coach Chris Johnson,  features a top-tier running back in Kimoni Stanley. He rushed for 149 yards and a TD against Oakdale. Last week marked Sierra’s third win over Oakdale in the Manteca school’s 25-year history.

Not unlike other teams still playing this weekend, Sierra is getting contributions from everyone.

Quarterback Shane Johnson hurt the Mustangs with his arm and his legs. His 4th-down pass to Nyco Mendoza resulted in a thrilling 58-yard touchdown and the decisive points with 1:24 left. Mendoza then preserved the victory with a clutch interception in the closing seconds.

“You couldn’t write it up any better. That’s how a championship game should be,” Johnson said. “We learned a lot from that first loss. It taught us how to play at that level. We felt if we could clean up our mistakes, we could play against them.”

The Sierra story is brim-full of feel-goodness. The Timberwolves' 21 seniors won only a single game at the JV level two years ago, and Stanley – as a freshman – was a member of that team.

Johnson, who built the successful Ripon program before he switched to Sierra, molded that team into a section champ.

“These are my guys,” he said. “There are no cliques on this team. It is one of the most tight-knit and unselfish teams I’ve ever been around.”

Rancho Cotate travels to Sierra with momentum from its 7-0 victory over Las Lomas in the North Coast Section DIII title game. That was the Cougars’ first section title since 2002.

Rasheed Rankin, a 6-foot-1 225-pound senior, led Rancho Cotate with 102 rushing yards and the game’s only score early in the fourth quarter. RC, like Sierra, also needed a late-game interception, this one by Jack Reese with Las Lomas only 12 yards away from the tying TD.

“They are used to going deep in the playoffs,” Johnson said.“They spread you out and throw, and they have a big running back (Rankin).”

Across town, Manteca prepares for a team holding major state hardware. McClymonds moves into DII-A after winning state crowns in 4A in 2018, 5-AA in 2017 and 5-A in 2016. This season, the Warriors have not been seriously challenged since their 19-7 season-opening win over Marin Catholic.

“McClymonds has tons of athletes and speed and they’re well-coached (by Michael Peters)," Manteca coach Mark Varnum said. “We’re going to try to play our physical game like we have the last few weeks.”

The Buffaloes’ 20-point third quarter was pivotal in their 33-14 victory last week over Placer, which clinched their seventh section title and the fourth in the last six years.

The game turned on Trabron Russell’s 55-yard touchdown dash on the first snap of the second half, and later by Angel Garay’s 87-yard pick-six. Russell finished with 225 rushing yards and four touchdowns to out-produced Placer’s 230-pound Hans Grassmann.

Comparing scores, always a dangerous game, could be revealing here. Downey, three weeks after its 54-48 overtime win over Manteca, was overrun at McClymonds 55-6.

Manteca will count on its improvement – Garay’s post-season performance is an example – to knock off the Warriors.

“It’s a testament to our players.  We go into every season to win a section title and a state title,” Varnum said. “Our defense stepped up to the challenge last week.”