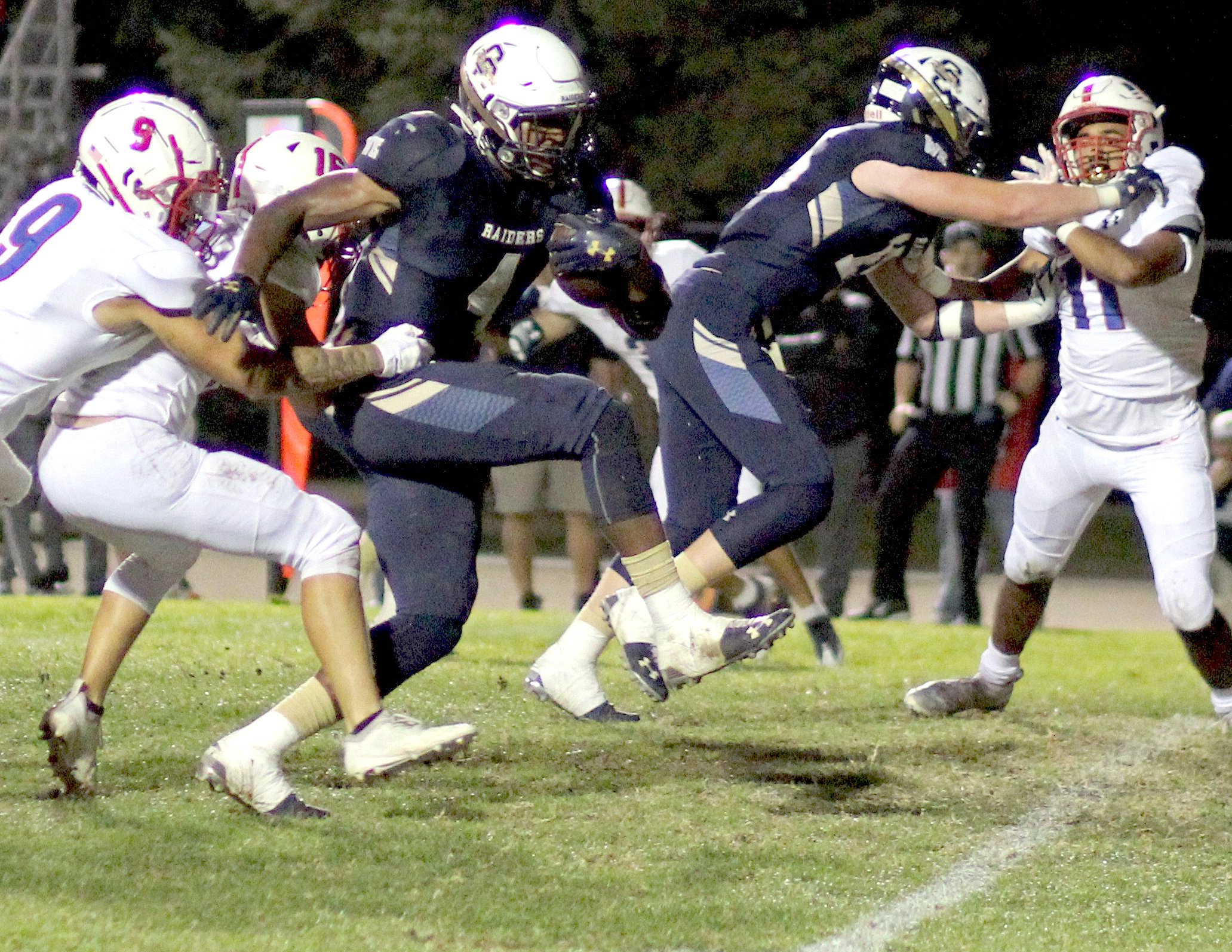 Central Catholic running back D'Angelo Bellamy pulls a pair of East Union defenders down field in a 48-7 victory on Sept. 28, 2018. (Samantha Schmidt)

There has been nothing easy about the soft part of Central Catholic’s schedule.

While the Raiders have won five consecutive games and scored 41 points in the first half of last week’s victory over East Union, the top-ranked team in the Front Row region has serious injury concerns.

Tight end/defensive end Nicolas Sani, a fast-rising 6-foot-6 junior, tweaked his shoulder against the Lancers, adding to a list of notable scratches for Friday’s tilt with one-win Weston Ranch.

Coach Roger Canepa confirmed that Sani, safety Minaya Olivo and offensive lineman Mikey Duran will miss the Valley Oak League contest at David Patton Field. That would give the banged-up starters two weeks of rest heading into the final games of the regular season versus Kimball and Oakdale, respectively.

“This is a good time for us to get healthy,” Canepa said on Tuesday afternoon. “You won’t see them until Kimball. Them three are done for this game. There might be a couple others, too. It just depends.”

Olivo played sparingly against East Union, but Canepa said the talented safety is still battling injuries to his ankle and shoulder. Duran has missed three games. The 6-foot-1, 250-pound guard returned to practice this week, albeit on limited duty, but isn’t ready to step back into the trenches.

Olivo’s injury has created opportunity for former starting quarterback Kyle Jackson, who lost the position battle with transfer Dalton Durossette. Jackson played safety and special teams against the Lancers and could see extended minutes against the Cougars, who won't shy away from the pass with senior Amier Bowen.

Canepa praised Jackson's maturity in the wake of the coaching staff’s decision to start Durossette, the American Chevrolet Large-School Athlete of the Week after throwing for 161 yards and four touchdowns in just one half against the Lancers.

Jackson started all seven Valley Oak League games last fall as a sophomore, very nearly guiding the Raiders to a league title before suffering a season-ending knee injury in a last-second loss to Oakdale.

“In this day and age, it’s so easy in high school to say, ‘I’m not playing, so I’m leaving.’ Competition makes every team better, and we’ve got some spots where we’ve got some good competition,” Canepa said. “Just as long as everyone is in it for the ‘We’ part, not the ‘I’ part.”

Canepa revealed that Durossette and Jackson are still sharing reps in practice, despite Jackson’s increasing workload on defense and special teams. Canepa wants the starter-turned-backup to remain fresh, hinting that there may be special packages installed just for him.

“We’re trying to get guys in the right spots. We want the best players on the field,” Canepa said. “He’s a very good athlete, and we still have great confidence in him at quarterback.”

There is one bright spot amid all of the injuries: Offensive lineman Evan Nunes will return to the field on Friday. The 6-foot-1, 255-pound Nunes missed the last three games with his own injury.