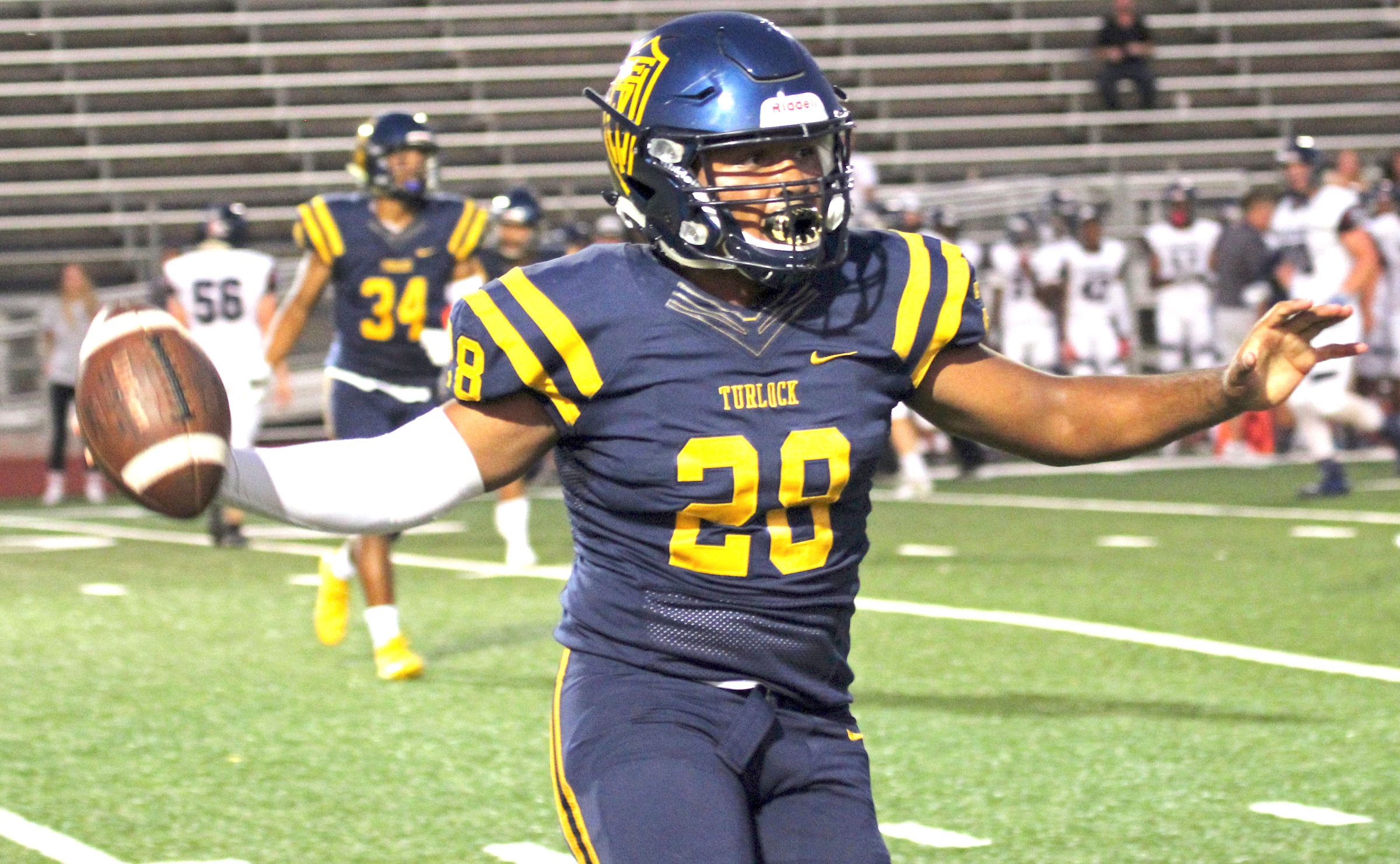 Turlock defensive end Devin Bradley celebrates a stop by the Bulldogs' defense during a season-opening win over Freedom of Oakley on Aug. 23, 2019. The Bulldogs return home to face another Bulldog this Thursday -- Tracy High, its annual Dogbone rival. (Samantha Schmidt)

All about the Dogbone: Tracy, Turlock meet Thursday night at Debely

The result: The Bulldogs on both sidelines have established a nouveau rivalry. They’ll continue the series Thursday night at 7 o’clock at Joe Debely Stadium.

“It’s been a good one,” said Peterson, in his 11th season as Turlock coach. “I think it prepares both teams for the rest of the season.”

Both teams are 1-1 after losing to strong opposition last week – Turlock 21-7 to East Bay power Clayton Valley Charter and Turlock 35-21 to Buhach Colony, the No. 1-ranked large-school team in the FrontRowPreps.com region.

The matchup presents contrasts. Tracy again is led by senior quarterback Logan Fife, a Cal Poly commit, who throws to wide receiver Trevor Pope. The tandem has connected for four touchdowns over the first two games.

Tracy, coached by 10th-year veteran Matt Shrout, is a perennial runner-up behind St. Mary’s in the Tri-City Athletic League.

Fife, 6-foot and 200 pounds, possesses a strong arm and also is a threat with his legs. He’ll be targeted by a physical Turlock defense anchored by three seniors -- middle linebacker Jayden Jackson, lineman Jacob Masihi and corner Darian White.

Taking away Tracy’s strength – Fife’s versatility – is the crux of Turlock’s game plan. Turlock then can impose its will on offense with senior running back Anthony Frias.

“I think they will have to throw the ball to beat us,” Peterson said. "We’re going to rally to the ball.”

Last week, Turlock drove into Clayton Valley Charter territory toward a potential game-tying touchdown. CVC clinched the win with a stop and a late score.

“I thought we were three plays away from winning that game,” Peterson said. “We haven’t found our stride yet but we’re close. Spreading out the defense and running between the tackles is our game. We’re getting there.”

The Turlock roster leads on and off the field. Frias is the student body president, quarterback Brock Paslay is the vice president and kicker Diego Angel is secretary.

Tops on their agenda Thursday night, however, is the Dogbone.