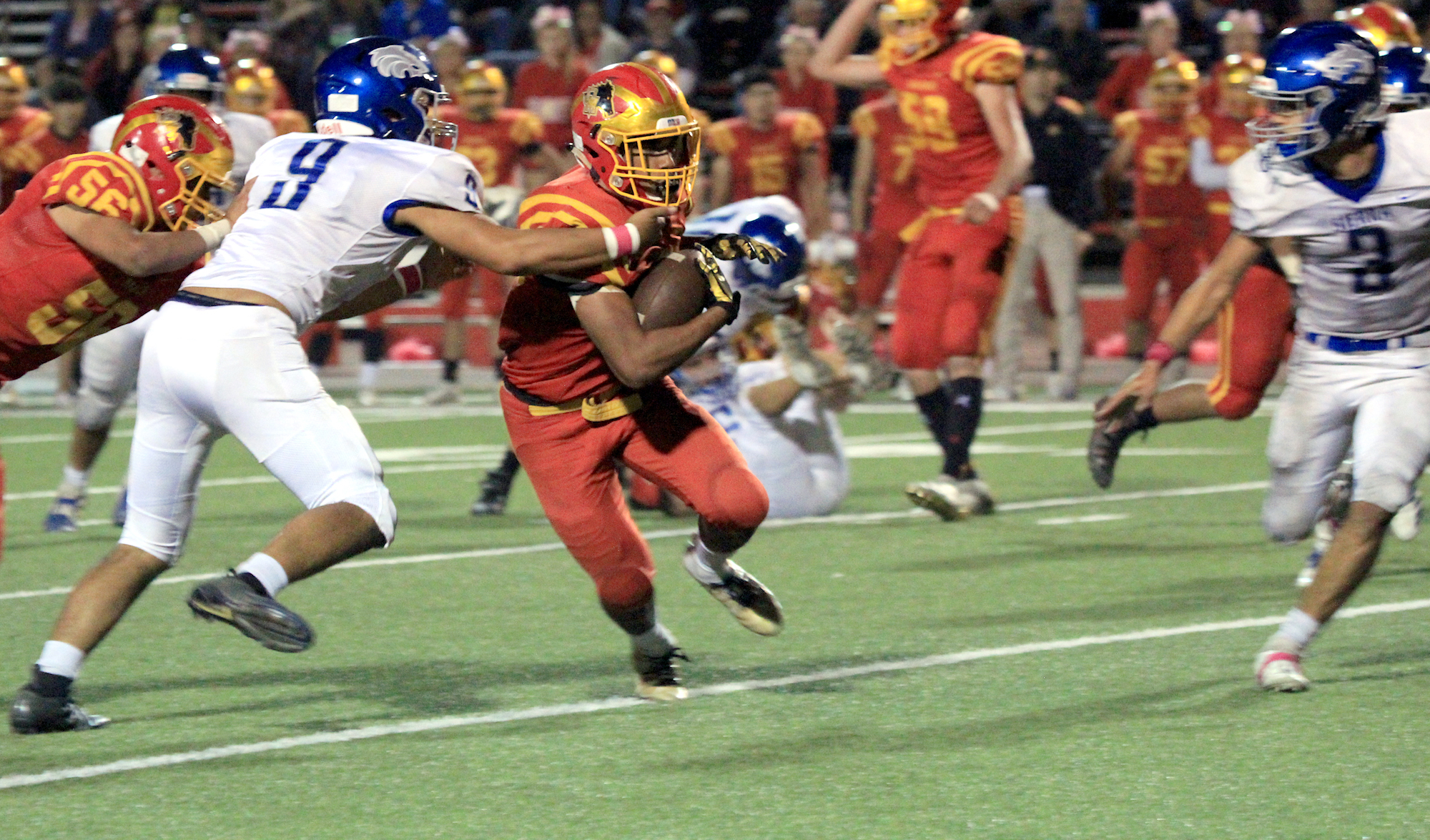 “We’re going to see the Wolves again,” he remembered.

Sure enough, the Sierra Timberwolves – one of Oakdale’s Valley Oak League rivals – earned what appears to be a fascinating rematch for the D-IV title Saturday night at 6 o’clock at Lincoln High.

Sierra (10-3), seeded fourth, placed fourth in the VOL behind tri-champions Oakdale, Manteca and Central Catholic. From there, the Timberwolves hit their stride with impressive playoff wins over Golden Valley, Atwater and their eye-catching 21-14 road victory last week over defending section and state champion Rio Linda.

It was Sierra’s 38-14 loss at Oakdale on Oct. 11, however, that demands a revisit. The Timberwolves played that game without outside linebacker-running back Matt Dunham, who served a one-game suspension after he was ejected during the previous game against Central Catholic.

Dunham, one of Sierra’s most important players, blocks for Kimoni Stanley (1,728 yards, 31 touchdowns), one of the section’s major home-run hitters. Dunham also is Sierra’s No. 2 threat and has scored eight touchdowns.

Not surprisingly, Sierra third-year coach Chris Johnson thinks his team has a chance with Dunham on the field.

“Oakdale definitely beat us, but we didn’t play our best football that night. When you commit (four) turnovers, you don’t beat anyone,” Johnson said. “Missing Matt was a tremendous loss. We learned a lot from that game.”

Stanley, even without his sidekick, gashed the Oakdale defense for two touchdowns, one on an 83-yard rip. Dunham’s presence changes the rematch, but there’s another thing: Sierra hasn’t beaten Oakdale in five years.

“The Oakdale program has been the barometer for a long time,” said Johnson, who built the Ripon program before switching to Sierra.

Both the Timberwolves and the Mustangs have won five straight since losses to Manteca.

Oakdale (9-3), seeded second, threw the VOL into a three-way dead heat by beating Central Catholic 42-39 to end the regular season. Since then, Oakdale battered Patterson 67-21 and turned away a challenge from Merced 51-27.

Zeke Saffar, like Stanley a weapon anywhere on the field, rushed for 171 yards and three touchdowns against Sierra. Both he and teammate Leo Ayala have topped the 1,000-yard mark and pump life into Oakdale’s Wing-T.

Sierra and Oakdale were tied 7-7 until the Mustangs scored touchdowns before and after halftime. Dom McDonald, a tenacious corner and an effective kicker, also enjoyed a huge game.

Merzon, his intuition proven correct, knows his defense – led by senior linebacker Cameron Snow – will be in for a fight.

“I’m sure they’ll be tough to deal with,” Merzon said. “They’ve got Dunham back and they’re super-athletic with a corps of eight or nine dudes. I liked the way our defense played (during the first game).”

Oakdale’s constant presence deep in the playoffs gives the Mustangs a perspective on how it’s done in late November and December.

“Whether it’s Sierra or anyone else, no one has gotten to a section final without being pretty good,” Merzon said.