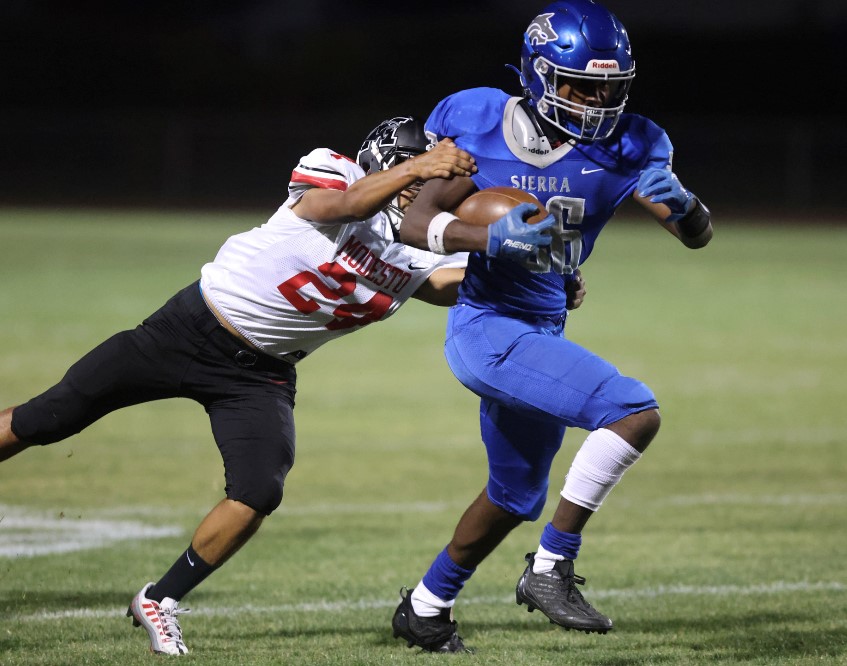 Modesto High's Alejandro Caurenta (24) tries to drag down Sierra High running back Anthony Grady in the first half of their non-league game on Friday, Sept. 16, 2022. (Manteca Bulletin)

Editor's Note: This story was first reported by The Manteca Bulletin and sports editor Jonamar Jacinto, and was shared with the FrontRowPreps.com audience. The following story was penned by Jacinto.

School administrators instructed game officials and coaches to lead players off the field at about 8:30 p.m. There were 5 minutes, 11 seconds left in the second quarter with Sierra leading Modesto, 23-21.

The chaotic scene started shortly after the visiting Panthers had scored a touchdown. Students appeared to be running from the practice field behind the home bleachers. Some climbed to the top row to get a view of an alleged fight that broke out on the practice field, while others began making their way toward the exit.

Sierra principal Steve Clark called off the game as the stadium emptied. Athletic director Ezequiel Ruiz is uncertain if the rest of the game will be played.

Clark declined comment, and Manteca Police officers at the scene said they could not share any details of the investigation. No shots were fired, and no one was harmed during the incident.

Police were initially called in because of the skirmish, and the commotion began while they were still in the parking lot.

Students from other Manteca Unified schools were allegedly involved. East Union and Manteca’s football teams did not have games on Friday.

The fracas spoiled an exciting non-league contest between two teams desperate for a win. Modesto (2-2) was coming off back-to-back defeats, while the Timberwolves (0-4) were hungry for their first win of the season.

Sierra was able to limit Modesto’s potent spread offense in the opening quarter as it sprinted to a 20-0 lead. An onside kick from Paul Barrios was recovered by Nikko Camarena after the Timberwolves’ second score.

Special teams came up big overall for Sierra. Barrios made both of his point-after kicks and a 23-yard field goal. Izayah Houston helped set up two of the Timberwolves’ scoring drives with kickoff returns of 49 and 43 yards.

Running back Anthony Grady scored all three of Sierra’s touchdowns. He rushed for 78 yards on 11 carries while adding 57 yards on three receptions.

Quarterback Tim Sarginson was having his best game of the young season, as he completed 9 of 12 passes for 112 yards.

Zion Garan netted 113 yards and a touchdown for Modesto. Quarterback Eli McCabe (6 of 7,68 yards) ran for a 30-yard score while hooking up with Heston Blom for a 44-yard TD. McCabe was the Sac-Joaquin Section leader in passing yards going into the game, while Blom ranked No. 2 in receiving yards.

Modesto has a bye next week and begins Central California Athletic League play Sept. 30 against Downey, No. 2 in the FrontRowPreps.com regional rankings. Sierra travels to Golden Valley next week to conclude its pre-league schedule. The T’wolves kick off the Valley Oak League season Sept. 30 at Oakdale.