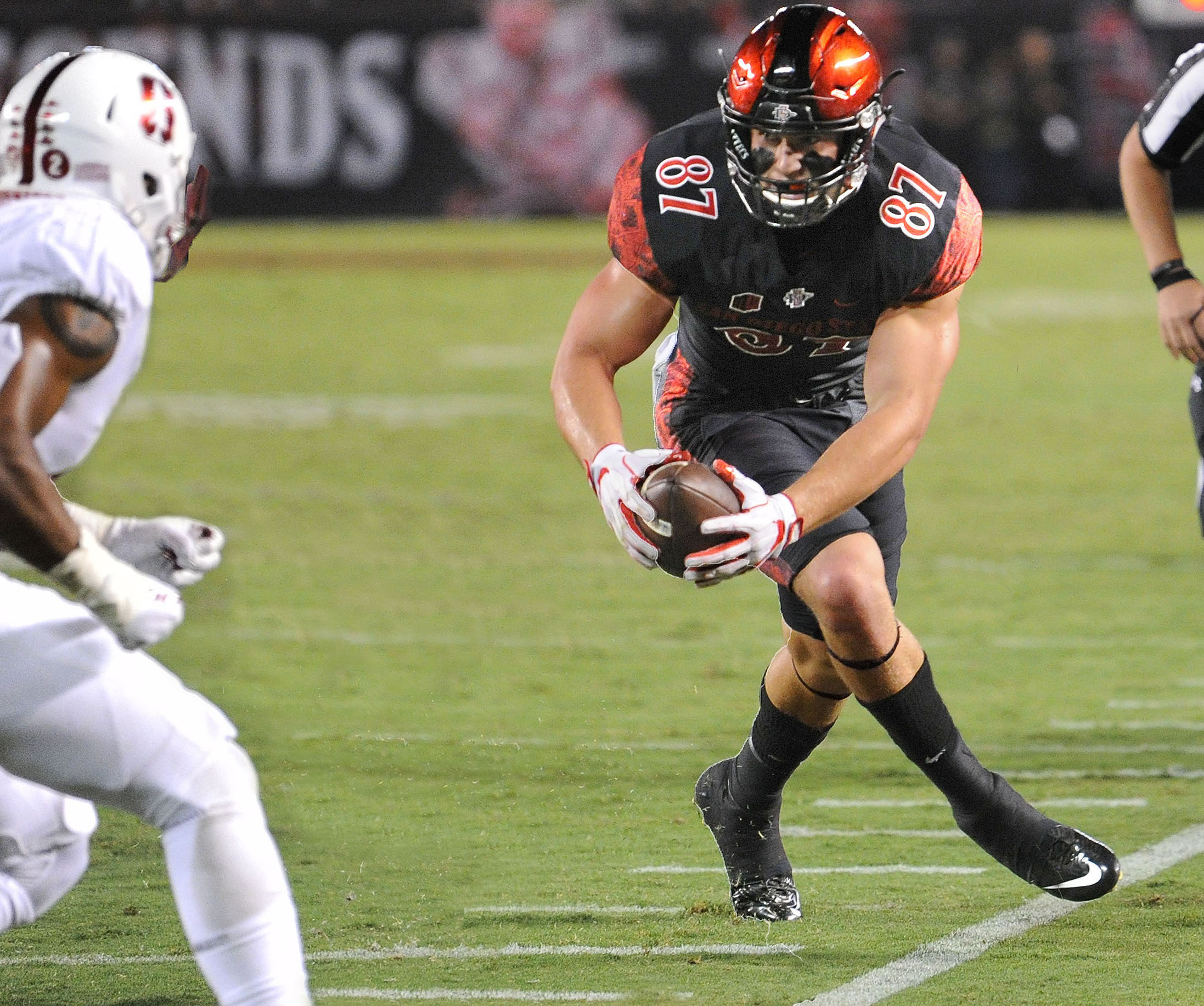 'Dude, you can play.' How a water polo castoff became an elite college tight end.

The San Diego State tight end and former three-sport star at Sonora High has been touted as one of the nation's top young prospects at his position, appearing on the John Mackey Award watch list along with another local graduate: Fresno State's Jared Rice, a former Central Catholic dynamo. The Mackey Award is given to the most outstanding tight end in college.

To be sure, Warring is one of the game's most driven athletes, transforming himself from an undersized walk-on into a scholarship athlete with serious pro potential.

"Not much has changed," he said, except his weight: Warring has tacked on 35 pounds of muscle. "I've had goals since I got here. My first goal was to get on the field. I got on the field as a redshirt freshman and scored some TDs before I got hurt. My next goal was to earn a scholarship. And now, my goal is for us to have a good season, and if I can have some success, good things may happen in the future."

In the days leading up to Friday's season opener at No. 13 Stanford (6 p.m., televised on FS1), Warring had a chance to reflect on his past and his fast rise in the game of football.

Though the 6-foot-6, 250-pounder passes the eye test, Warring grew up playing every sport but football in the Mother Lode. He dabbled in competitive soccer; excelled on the hardwood, where he was named the Mother Lode League's MVP in 2015; and then followed his friends into the pool, where he competed in water polo every fall for three years. Football didn't enter his life until five days before his senior season.

He only suited up because his water polo buddies had graduated.

"I didn't have anybody left in water polo, but I had friends on the football team," Warring said. "They finally convinced me to play. They had always tried to get me to play football, but I didn't want to get hurt for basketball. I was totally just playing for fun; to hang out with my friends and try football, because I knew I'd never do it again."

The football gods had other plans for Warring.

He averaged 26.1 yards per catch for the Wildcats, who captured the first of four consecutive Mother Lode League championships. Warring finished with 548 yards and on 21 receptions in nine games, utilizing his natural basketball instincts. High-pointing a pass was no different than high-pointing a rebound.

"Toward the end of the season, my coaches were like, 'Dude, you can play college ball,' " said Warring, who flirted with a few junior college offers before accepting a preferred walk-on position with San Diego State. He spurned a similar offer from Sacramento State, fancying the Southern California beach life over the Capital City.

Warring's rise isn't without moments of disappointment and despair. As redshirt freshman in 2016, he appeared in the first four games, turning both of his receptions into touchdowns. However, a foot injury cost him the final 10 games of the season. He returned last fall and led the team in touchdown receptions (three), earning his place on the Mackey Award watch list.

More importantly, he was given a full scholarship by the coaching staff just before the 2017 opener, a moment he'll never forget.

"That's probably the biggest accomplishment in my life ... the best thing that had ever happened to me," Warring said. "You here and you're a walk-on, and though our school treats you well, at the end of the day, you're not getting a scholarship check and not getting your school paid for. When you work your butt off and you finally get that scholarship, it's really rewarding."

Though his visits back to the Gold Country are sporadic and virtually non-existent during the fall, Sonora still holds a special place in his heart. Warring was groomed as a competitor, sharpened by his battles in the pool ... on the hardwood ... and under the lights of Dunlavy Field. He met with the Sonora football team over the summer and even brought them a special gift: San Diego State quarterback Christian Chapman, who threw passes to the high school wideouts and share wisdom with Wildcat QB Jake Gookin.

Warring hopes his story inspires the boys back home to set goals and never stop chasing. The game's most unlikely star may have found football later than most, but his passion burns just as hot. The game has challenged him in a variety of ways -- from his role as a preferred walk-on to injuries -- and rewarded his determination, sacrifice and struggle.

"If you want something bad enough, you should go out and get it," Warring said. "I wanted to be a Division I athlete and wanted to be on scholarship. Some people think being a walk-on, you won't be recognized on the team. That's not the case. Once they see you making plays, you get that respect."