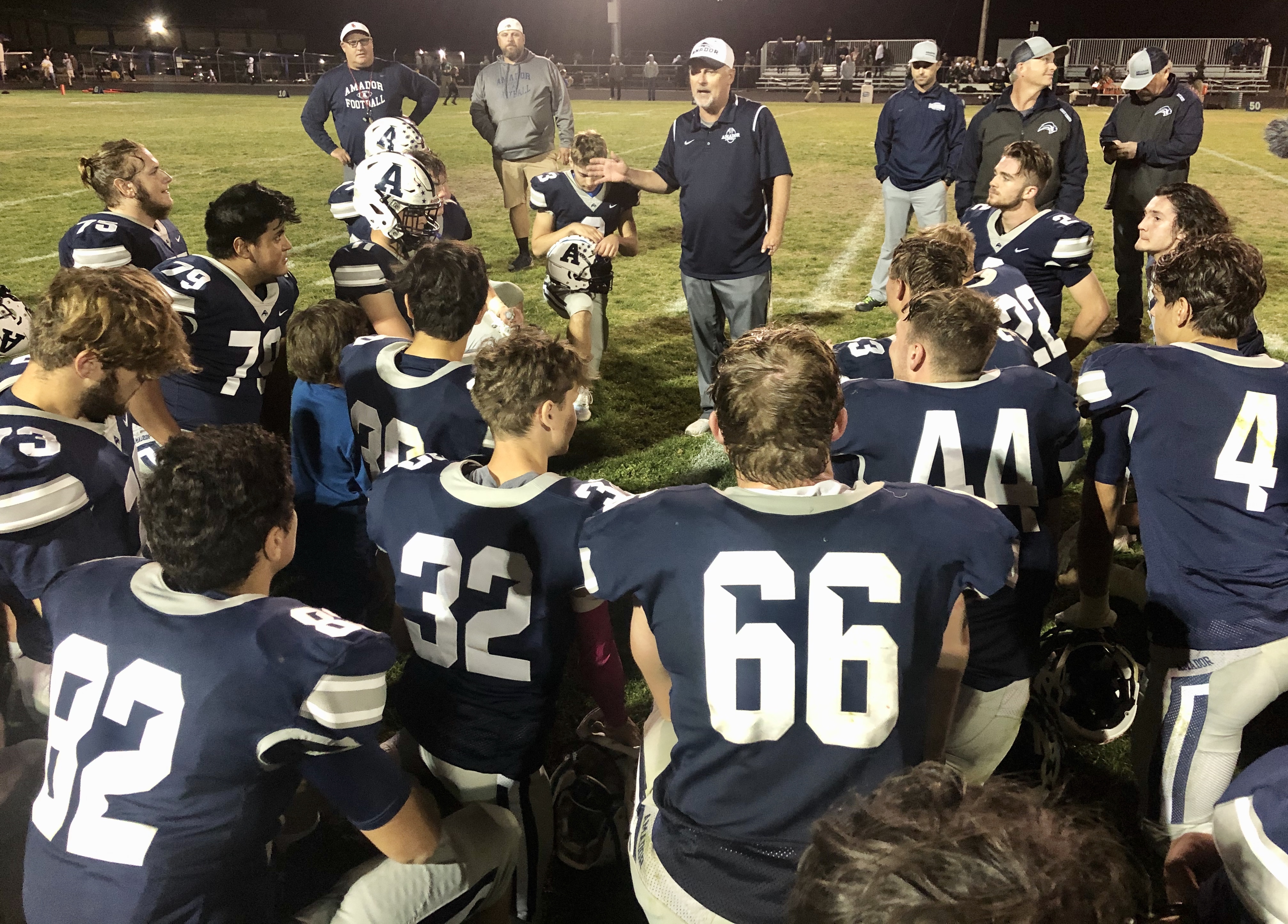 SUTTER CREEK -- When Sonora was pushed out of the Valley Oak League during the 2014 realignment, the Mother Lode League’s small-school programs shuddered.

While Sonora built a dynasty, Amador coach Bill Baker began constructing a plan to beat the ‘Cats. He started building around underclassmen and expanding his playbook.

On a beautiful Friday evening in Sutter Creek, the plan came together.

“A few years ago we were trying to find a way to beat these guys. If you’re going to win the Mother Lode League, you have to go through Sonora,” said Amador coach Bill Baker, his team now 8-1 and tied atop the MLL with Calaveras and Sonora. “We knew we had to spread it out a little bit. We have some kids who are pretty good in space.

“This is something we’ll remember forever, for sure,” he added.

Amador, a former CIF State finalist, is the first MLL team to beat Sonora, and it accomplished the feat with a veteran roster and an air-it-out attack.
Three years ago, Baker pulled up seven sophomores, five of which took the field as seasoned seniors on Friday evening.

“This feels amazing and it’s on Senior Night, too. I can’t even describe how it feels,” said Drake, a junior. “... We’ve played really good games before, but tonight, everybody was on. We really needed this one.”

Drake started the rout with a 6-yard touchdown to tight end Nash Wylie, a slimmed-down former offensive lineman, on the opening series. Wylie was Drake’s favorite target, hauling in touchdown passes of 20 and 39 yards.

Amador led 28-7 at the intermission and plunged the dagger into the Wildcats with a scoop-and-score on the opening possession of the third quarter. Sonora quarterback Nick Crockett, the hero in last week’s runaway win over Calaveras, was crushed from the backside, fumbling at his own 28 yard line. Inigo Baxter picked the ball up on a bounce and took it the rest of the way for a 35-7 lead.

“We don’t throw that much usually, but it worked out tonight,” said Drake, who also had scoring throws to Lance Der Manuelian and Kole Alleyn.

“That’s what we needed to do to win. We saw their defense and saw what we could do with them, so we picked on them.”

After scoring 138 points in its first three MLL games, Sonora’s offense was grounded. The Wildcats didn’t score until the game was out of reach.

Two weeks after a mistake-filled home loss to Calaveras, Amador owned the night.

“Adversity helps kids a little bit,” Baker said. “We didn’t play good game the other night and had to let it roll. Tribute to our kids, they were ready to go. We knew what we were against, but we came out ready to roll.”