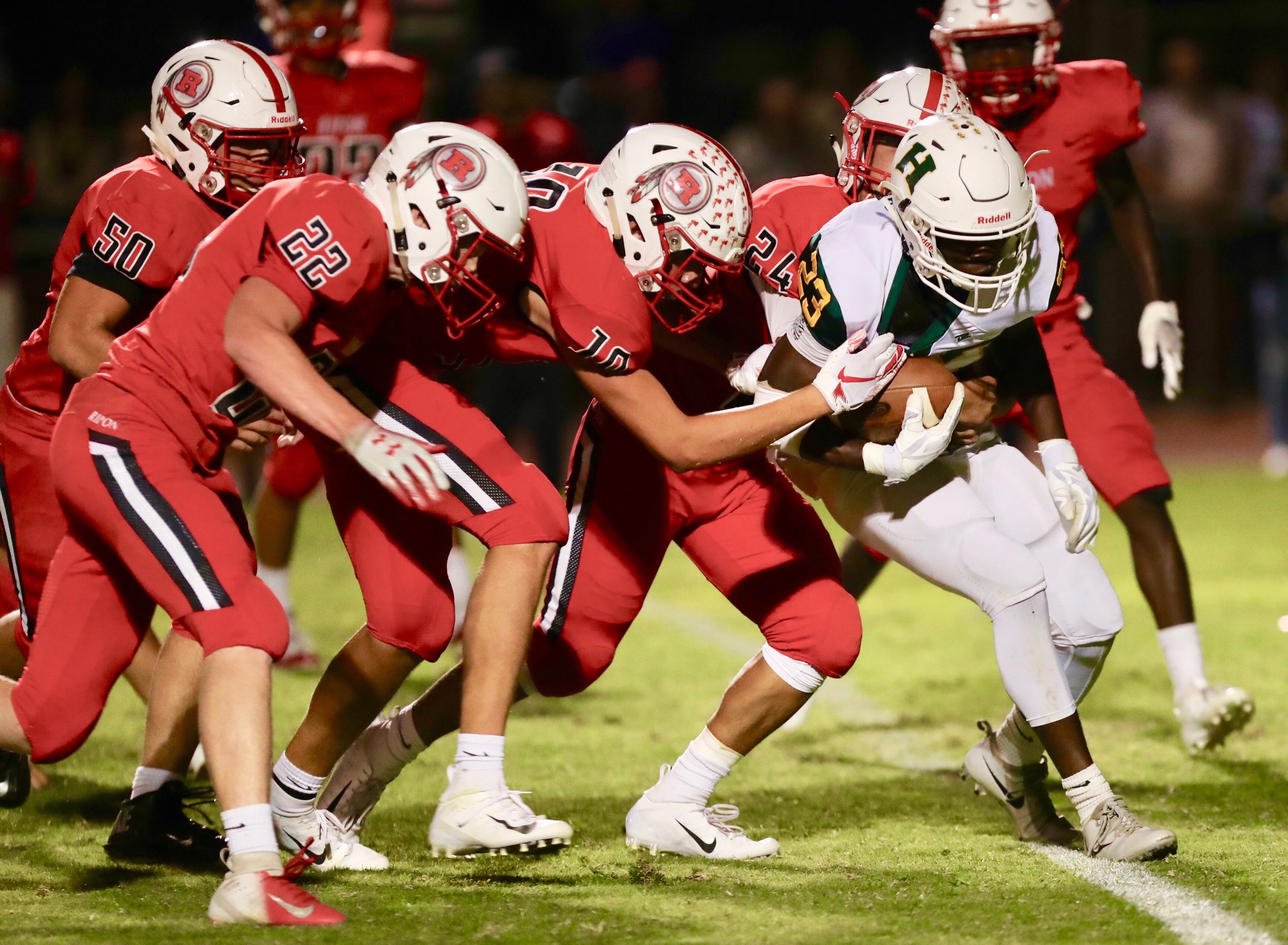 The Ripon defense converges on Hilmar running back Isaac Sharp during a 23-21 victory at Stouffer Field on Sept. 14, 2018. (Wayne Thallander)

Is Ripon the new small-school No. 1 after upsetting the top-ranked Yellowjackets?

RIPON — The chant bounced off their shoulder pads, growing with every reiteration in the final seconds of a 23-21 victory over top-ranked Hilmar.

“We’re the new No. 1,” went the chant on the Ripon sideline.

The Indians, ranked No. 3 in this week’s FrontRowPreps.com small-school poll, built a solid case on Friday evening in their highly anticipated Trans-Valley League opener, also the Chicken Ranch Casino Game of the Week.

“I love the fortitude you showed tonight,” Ripon coach Chris Musseman told his team afterward. “We made mistakes in that fourth quarter, but you stuck together and won a big freakin’ game.”

Ripon improved to 5-0, its best start in five seasons, and have now won four of the last five meetings with the Yellowjackets (4-1). But is this latest triumph enough to shoot the Indians to the top of the small-school poll, leapfrogging idle Escalon (4-0)?

Judging by their volume and revelry following the final buzzer, yes.

“Last week we faced some adversity and started to come together,” Musseman said, referring to a 24-21 victory over Calaveras. “They became a team tonight. If we get through the TVL, this is how it’s going to have to be every night.”

Isaac Sharp rushed for more than 200 yards for the second consecutive game and Justin Rentfro pulled the Yellowjackets within 23-21 with 1-yard run with 64 seconds left, but Hilmar’s onside kick tumbled out of bounds.

And now the Yellowjackets, talented and deep but susceptible to mistakes and turnovers, will certainly tumble in the rankings after four weeks at No. 1.

Sharp finished with 215 yards and scored on a 68-yard sprint with 5:09 left in the first quarter, answering a 20-yard touchdown run by Ripon’s Roland Davis. Sharp, the Merced Sun-Star's reigning Player of the Year, later weaved his way in from the 11 to cut Ripon’s lead to 17-14 with 7:37 remaining in the game.

The Indians countered with their own hard-to-catch star — Daggett, a third-year starter whose poise and leadership held Ripon together in the shaky final minutes. One series after fumbling a handoff, Daggett missed another and was forced to improvise. He tucked the ball and followed his fullback — the intended ball carrier — through the hole and into space, completing a 31-yard scoring run with 1:42 left.

“This is the biggest win we’ve had since I’ve been the starter, especially coming against Hilmar,” said Daggett, who was 8 of 14 for 102 yards and a touchdown, a 30-yard strike to favorite target Nico Ilardi to make it 17-7 after the third quarter.

Ripon’s defense continued its strong start to the season, and buttoned up the victory by forcing three turnovers. Justin Hansen and Danny Hernandez had interceptions, Caleb Delgado recovered a fumble in the fourth quarter, Troy Brogan had a sack, and Grant Wiebe, with arms, hands and fingers fully extended, blocked a 37-yard field goal attempt, spoiling the Yellowjackets’ only possession in the third quarter.

With momentum in their sails, Ripon orchestrated a 16-play, 80-yard drive that chewed up nearly 8 minutes of clock. Ilardi, the first cousin of Manteca quarterback Ryan Ward, capped the drive with a 30-yard touchdown reception, his second in as many weeks.

“They played with all their heart the whole night. I’m extremely proud of them,” Daggett said of the defense. “They did everything we needed them to do, followed the game plan and stuck it out until the end.”