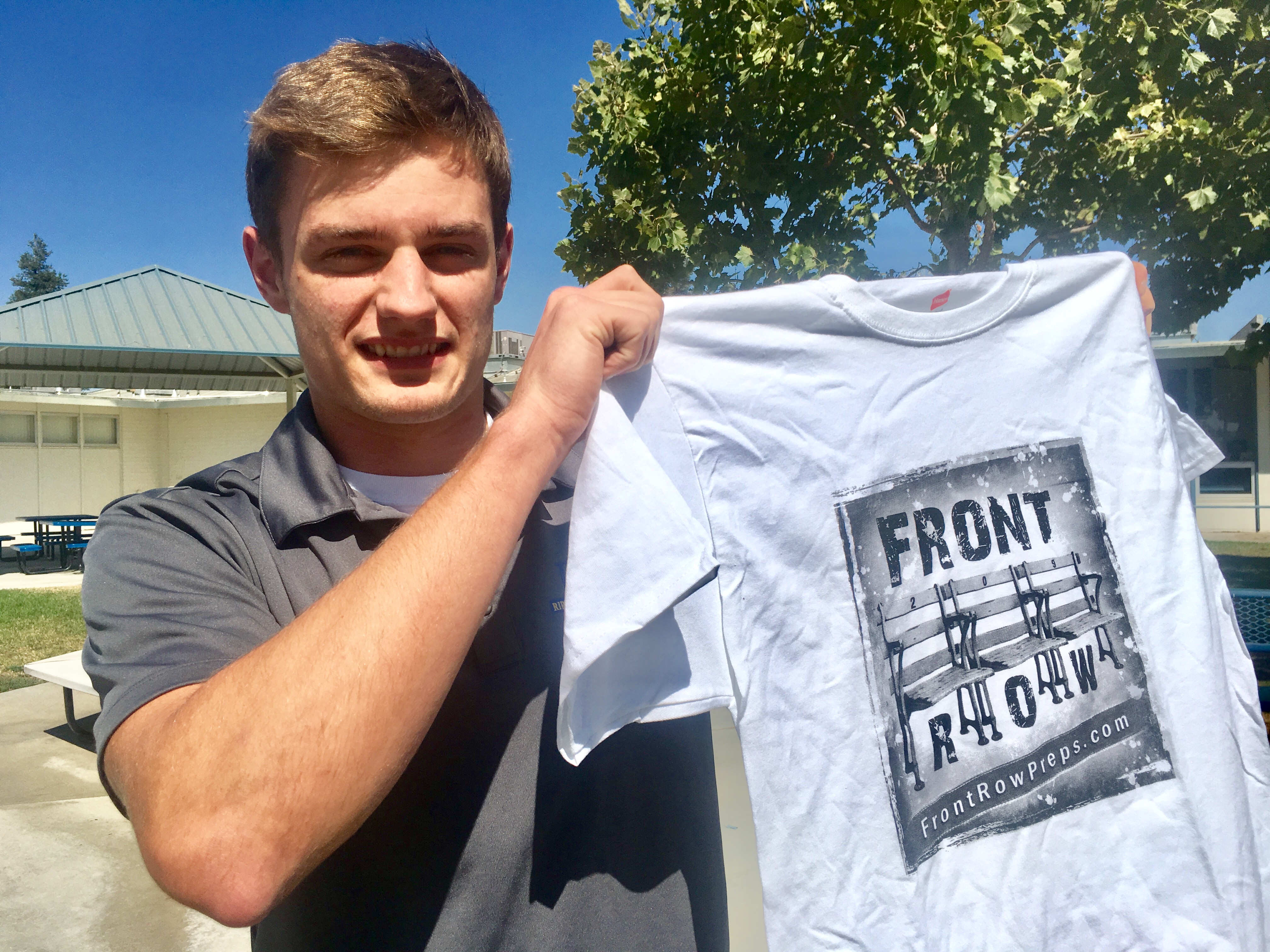 Michael Kamps of Ripon Christian displays a FrontRowPreps.com shirt after being named the site's small-school Athlete of the Week following a 280-yard, four-touchdown performance against Stone Ridge Christian. (James Burns)

Parents walked their children off campus, buses jammed the small parking lots, and those with extra-curricular activities scrambled across the courtyard, including one so fast she tumbled in the grass behind gymnasium.

Through the doors to the high school office, though, Ripon Christian football coach Trey Ozenbaugh waited in a vacuum with a versatile talent — Michael Kamps, a fast-action two-way player with a rich toolbox. He can run. He can catch. He can tackle. And now, following a 63-12 victory over Stone Ridge Christian last Friday, there’s this: the Front Row’s small-school Athlete of the Week can throw, too.

Kamps accounted for 280 yards of total offense and four touchdowns in Ripon Christian’s second straight victory to start the new season. He rushed for 220 yards and two touchdowns on just 15 carries; reeled in a 56-yard scoring strike from Cade Alger, one half of the Knights' duo (or is it duel?) under center; and he tossed his first career touchdown, a 27-yard connection to Sean McGovern.

A workhorse the last two seasons, Kamps has enjoyed a spike in his usage rate and yards per carry this fall. He is on pace to surpass his combined number of catches from 2016-17 (29), and he’s averaging 6 more yards per carry.

On this busy Monday afternoon, as the world turned around him, Kamps stopped for just a minute to talk to FrontRowPreps.com about his versatility and production, as well as the Knights’ prospects in the Southern League and beyond. It might be the only time this season he's slowed long enough to be considered down.

FR: As a team, Ripon Christian has outscored its first two opponents 112-18, and you’ve shown an expanded skillset. Do you enjoy the pressure of being a do-it-all type in first-year coordinator Randy Fasani's offense?

MK: I, of course, love the fact that I’m getting used a lot by my coaches. It’s an honor. It comes down to the weight room. I’ve worked hard in the offseason to make myself the best player, (but) I’d say the biggest thing is that the players around me are better. … It’s all coming together and things are just fitting.

FR: You can affect a game in a variety of ways, and now there’s film of you throwing. Do you pride yourself on being versatile?

MK: Especially at RC, you can’t just be a running back type. You can’t just be a receiver. You have to be multiple things, especially on offense and defense. As for the offensive game, where ever the coaches want to use me that’s just what I’ll do. I want to do as much as I can to help the team. If that means catching the ball or throwing the ball, I’ll do it.

FR: Your good for a first down every time you run the ball. To what do you attribute your spike in yards per carry? (Note: Kamps is averaging a career-best 11.3 yards per rush.)

MK: It shows that our offense is working. My offensive line is helping me get yards at a more efficient rate.

FR: Ripon Christian has established itself as a perennial playoff team, but the program has yet to win a Sac-Joaquin Section title. What are the aspirations for this year’s group? (Note: The Knights reached the Division VII final last fall, losing to Rio Vista.)

MK: You have to have the confidence that you want to win your league and that’s what we want to do. We also want to win sections. That’s something we couldn’t do last year. That’s obviously what you want. Last year, we lost to some teams in the Southern League we shouldn’t have lost to.