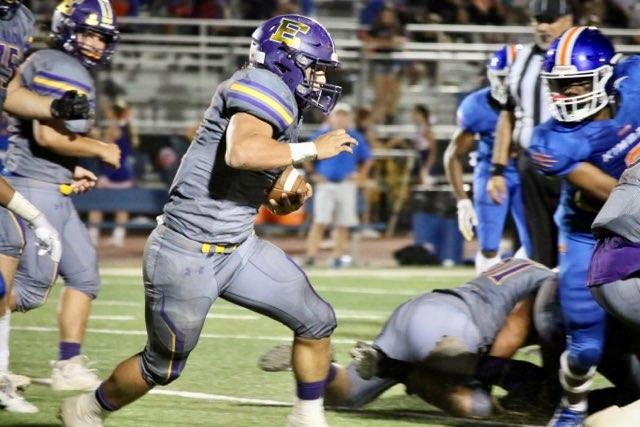 Escalon High running back Ryker Peters finds space in the Kimball defense during a 30-22 victory on Friday, Sept. 9, 2022. (Ryann Smith)

Peters, the area’s most productive running back thus far this season, pounded, slashed, and twisted 35 times for 253 yards, four touchdowns and a 2-pointer—almost every single yard between the tackles—as the Cougars eventually pulled away from Kimball 30-22.

“When you’re a junior, you’re so young  you don’t think of the team as a whole just yet,” Peters said. “When you have seniority, you want to win with every guy on the team.”

Peters carries himself much larger than his 6-foot 210-pound frame. He almost always falls forward, even against a defense geared to stop him. Which is why he’s rushed for nearly 900 yards and 16 touchdowns after only four games.

The Escalon offense built a successful game of keep-away. Amazingly, the Cougars held the ball for nearly three-quarters of the game. Conversely, Kimball took its last snap on offense with 4:24 left in the third quarter.

Escalon’s early 14-0 lead evaporated to a 14-14 tie, but the Cougars responded with a 55-yard drive capped by Peters’ 1-yard rip on third down and his own 2-point conversion.

Kimball dealt an even larger punch—an 86-yard kickoff return to the house by Travis Mareiro, and a conversion pass from Jayden McKey to Sebastian Tate to tie 22-22.

The Jaguars, Sac-Joaquin Section Division IV semifinalists a year ago, figured to recede after the graduation of prolific quarterback Nicholas Coronado. They have regressed, but not as much as expected and could cause a surprise or two in the Valley Oak League.

What hurt Kimball were two early-game interceptions, one in the end zone for a touchback. First-year head coach Derek Graves switched quarterbacks to McKey, a senior, and the Jaguars found traction on offense. A 36-yard strike from McKey to Darius Doyle, who broke a tackle and raced to the end zone, got the Jaguars back in the game.

“The opportunities we did have, we didn’t take advantage of,” said Graves, formerly an assistant coach at San Joaquin Delta. “We always play with effort. That’s why I’m not too down.”

Graves referred to Kimball’s twice tying the game, the latter on Mareiro’s wizardry on the kickoff. Trouble was, the Jaguars did not snap the ball on offense again for the final 16:24. They absorbed a crash course of Escalon Football 101.

The Cougars, overcoming a brisk and warm crosswind in the fourth quarter, marched 75 yards in 16 punishing plays that consumed nearly nine minutes. They sustained the drive on one of the game’s biggest plays, a 4th-and-10 pass from Donovan Rozevink to Owen Nash. Minutes later, Peters crashed in from a yard out for the go-ahead touchdown with 3:37 left, and Rozevink hit the 2-point pass over the middle to Anderson.

Minutes later, the Escalon bench erupted when Derek Silva forced a fumble on the kickoff and Talan Reider recovered.

The Cougars knew they could run out the rest of the time, and the clock ticked to zero as Rozevink took a knee inside the Kimball 5 yard line.

“We gotta do that (possess the ball) against teams that are faster and bigger than us,” Escalon coach Andrew Beam said. “We’re not going to be happy with the way we played…It wasn’t pretty but we’ll take it.”

Then again, Escalon was blasted by Kimball 54-14 in 2021. The sweetness of the win for the Cougars can’t be discounted, especially going into their homecoming and Trans Valley League opener against Hughson.

Another plus: They’ve got Peters wearing the Escalon purple.