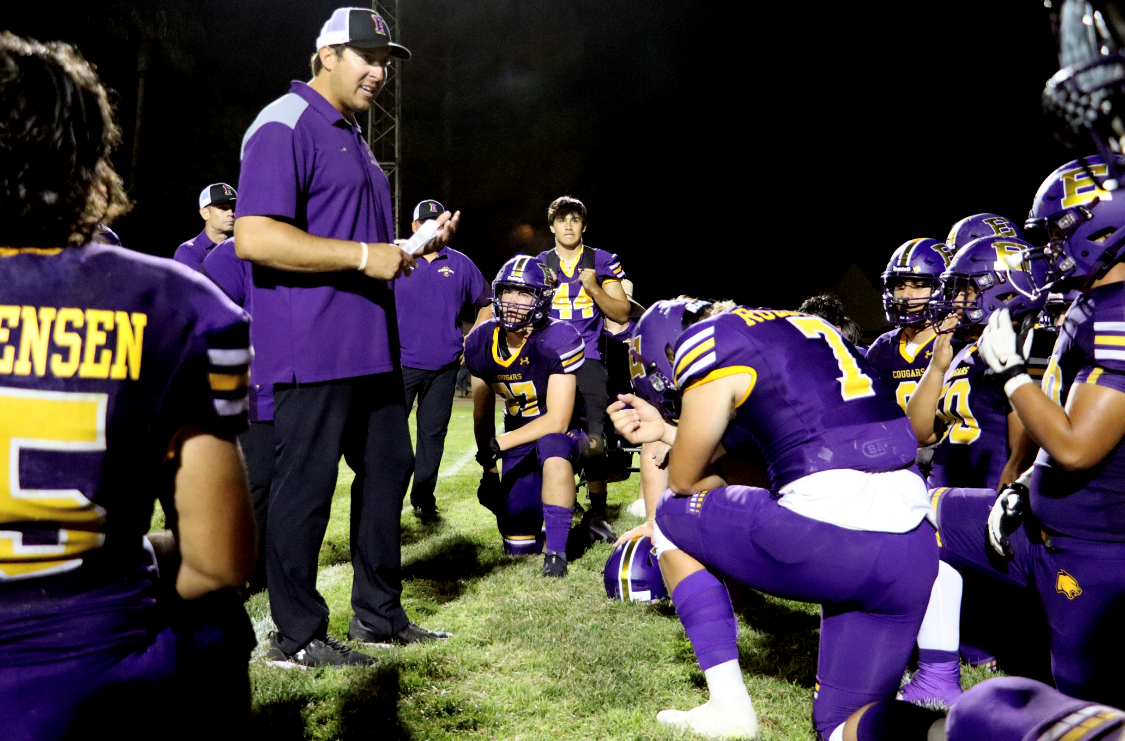 Battle of No. 1s: Buchanan of Clovis needs extra time to hold off Escalon

On a hot August night, the Escalon High Cougars faced Clovis’ Buchanan Bears in a David vs. Goliath match-up. While both schools are ranked No. 1 in their respective sections, Buchanan plays in Division I and has three times the enrollment of Division-V Escalon. The Cougars fought tooth and nail but fell to the large-school Bears in overtime, 41-40.

Buchanan’s Colton O’Toole scored the first touchdown of the game just two minutes in. Escalon’s Ryker Peters answered by catching a pass for 50 yards. From first-and-goal, Peters put Escalon on the board, though the extra point was no good.  With 8:42 left in the second quarter, the Cougars pulled ahead 14-7 with a second touchdown from Peters and Jamin Miller contributing a successful two-point conversion.

Buchanan responded with two touchdowns in a row.

Jayden Mandal scored the first and Michael Runnels scored the second after a Bear intercepted a pass from Donovan Rozevink. The Cougars fought back and Logan Anderson scored the first of his 3 touchdowns, gained 62 yards off a pass from Rozevink, and tied the score again at 21. With the half winding down, Buchanan once again pulled ahead. From the 5-yard line, quarterback Jayden Mandal put his head down and ran the ball himself. With the extra point, the Bears pulled ahead 28-21.

Most of the third quarter passed with neither team making progress, but with two minutes left, Anderson once again found the end zone. Unfortunately, the extra point was no good and Escalon now trailed by one, 28-27. This missed point would come back to haunt the Cougars.

You could feel the tension on the field during the fourth quarter. Initially, the Cougars stymied the Bears and forced them to take a field goal. The Bears pulled ahead 31-27. With just over a minute left in the game, Anderson scored his third touchdown of the game. With the score sitting at 34-31, the Cougars were hoping to come out on top. However, with only 2 seconds on the clock, the Bear’s Joshua Dunu completed another field goal and forced the game into overtime.

In overtime, Peters scored again for Escalon. The Cougars set up a two-point conversion in an attempt to make up the earlier missed point and secure their lead, but it was not successful. Buchanan saw its opportunity and with a touchdown from Augustus Remlinger and a final kick from Dunu, the Bears clawed their way into the win column.

While coach Andrew Beam was hoping for a win, he was still immensely proud of his Cougars and is looking forward to seeing them grow throughout the season.

“You did everything we asked of you tonight,” he said. “Now I know what you’re capable of … (This) should serve as motivation for the rest of the year.”

Peters is already looking ahead, “We keep playing like this, with the teams we face, I see us playing into December.”