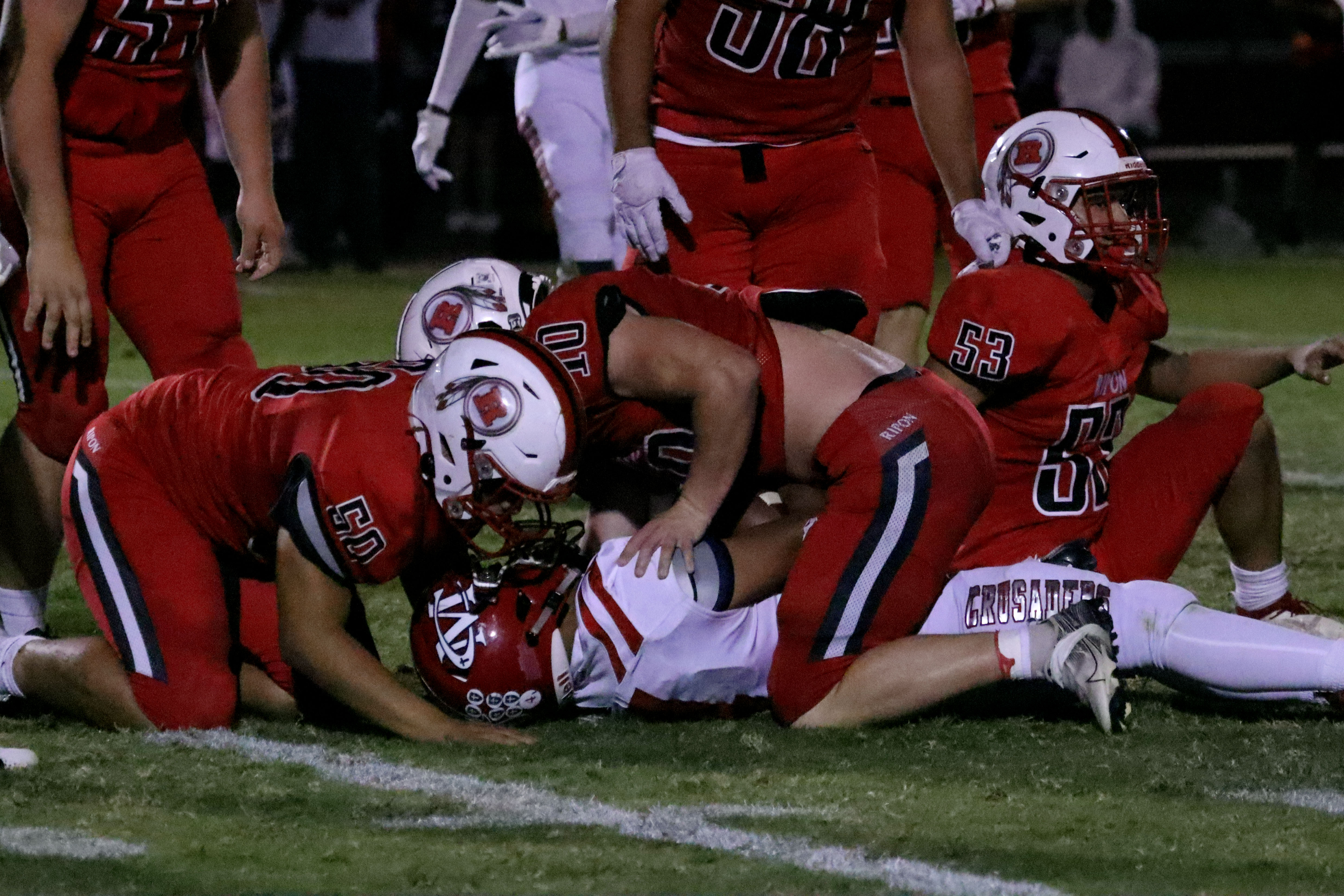 It was a long, slow slog of a game filled with delays, penalties, and even a brief stop for a downed ref on the field, but the Ripon High School Indians defeated the Modesto Christian Crusaders 54-19.

While the game started out tight, the Indians steadily pulled ahead through the night. Four minutes into the first quarter, sophomore running back scored Anden Ries put the Indians on the board and scored the first of his four touchdowns of the night.

With one minute remaining in the quarter, Modesto Christian's Jeremiah Bernard perfectly intercepted a pass intended for Xzavier Clark. Building on this momentum, MC’s Ross Widemon completed a 12-yard pass to Jeremiah Bernard for a touchdown. The Indians’ Ries immediately answered with a 52-yard rushing touchdown. The Crusaders wouldn’t score again until the third quarter.

Ries dominated the second quarter with two more touchdowns, for 5 yards and 23 yards respectively. He felt his team was really working together to conquer the Crusaders.

“We were just in sync and we came out ready to hit and got physical,” he said later.

Going into halftime, the Indians led 26-7.

Maintaining that dominance, Clark opened the new half by rushing for 41 yards, and with Jesus Ochoa’s extra point, bringing the score to Indians 33, MC 7. A minute later, MC’s Isaiah Davis caught a touchdown pass to bring the Crusaders up to 13 points, but their two-point conversion attempt failed.

The Indians’ Adam Johnston responded with a touchdown with six minutes to go. Reiterating their message to the Crusaders, Carson Daley intercepted an MC pass to return the ball to the Indians. Trent Vink followed that up with a 27-yard touchdown. To close out the third quarter, MC’s Widemon completed a pass to Davis for what would be their final score of the game.

To seal the Indians' victory over the previously undefeated Crusaders, Aiden Krupa ran the ball for a 4-yard touchdown with 9 minutes left in the game. The fourth quarter ran down under a running clock after an Ochoa intercepted an MC pass.

Coach Chris Musseman was pleased with his team’s performance.

“They probably threw the ball almost every down and with the clock stopping it was just a long night. I think it was a good win for our kids, we started the season off a little rough and it's nice to see them starting to come together…I am happy with the result that our kids got tonight,” he said.

Samantha Schmidt is a freelance reporter and photographer. Her work appears regularly on FrontRowPreps.com.