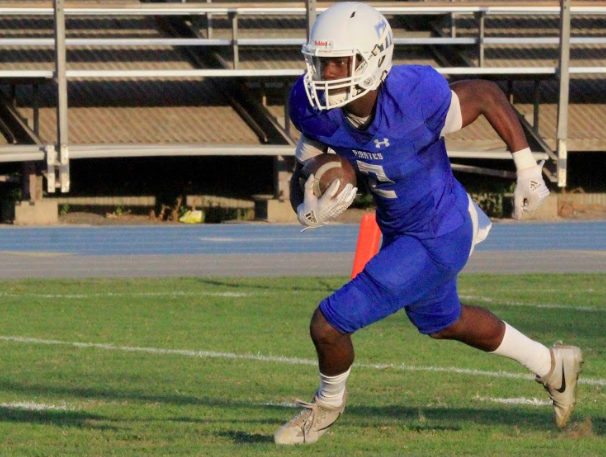 The Modesto Junior College Pirates will rely on time, in the form of this week's bye, to erase from memory the events of Saturday afternoon.

Issues on offense and special teams, coupled with a spat of injuries, crippled the Pirates as College of San Mateo chased MJC from the ranks of the unbeaten 35-12. The Bulldogs (5-0), ranked No. 2 in California, outplayed No. 3 Modesto (4-1) from the opening kickoff.

And Modesto’s woes indeed were launched on the game’s first play.

CSM’s Terrell Carter muffed the kickoff, which caused MJC’s coverage to bunch. Carter picked up the ball, stepped to his right and raced 84 yards past the Bulldogs’ bench for the touchdown. Later in the game after Modesto pulled to within 21-12, San Mateo’s Jermain Jackson again gashed MJC with an 89-yard kickoff return for a TD.

The Pirates could not recover from the twin breakdowns on kick coverage. San Mateo coasted to the win at its scenic hilltop stadium overlooking the bay.

“When you talk about a perfect storm, that was crazy,” MJC coach Rusty Stivers said. “You can’t make the mistakes we did and beat a team of that level.”

Other problems plagued Modesto. Quarterback Danny Velasquez (knee) played only sparingly when Brett Neves -- who logged his second straight game at QB -- was shaken up. Running back Michael Ramos, a pleasant surprise over the season’s first month, missed the game due to a broken fibula incurred the week before against American River. Stivers said Ramos will be out for six weeks.

The absence of Velasquez and Ramos, the twin pillars of MJC's productive ground game, meant the Pirates started a new backfield against San Mateo.

Isaac Sharp, Ramos’ replacement, responded with 96 rushing yards and both MJC touchdowns. A fumble on the goal line cost him a third touchdown.

Neves completed 19 of 32 passes for 235 yards. Receiver Brandon Gray continued his strong season by catching six passes for 81 yards. That said, treading against an aggressive San Mateo defense – it allowed less than six points per game before facing Modesto – was not easy.

Midway through the third quarter and moments after Jackson’s kickoff return, San Mateo’s Trey Smith intercepted Neves’ quick pass and ripped 28 yards for the touchdown, the game’s final points. Jackson, during the first half, also caught a 53-yard scoring pass from Luke Bottari.

Modesto outgained 348-246 and built a nine-minute possession advantage, but the avalanche of huge scoring plays rendered those numbers moot. The loss probably will carry postseason repercussions regarding bowl-game assignments.

“San Mateo is really good. They’ve always done a good job on special teams. That is an area we need to improve on,” Stivers said. “You might as well make the mistakes now so we can correct them before league.”

The Pirates hope to have a healthy Velasquez for the Valley Conference opener at home against Sequoias on Oct. 19.