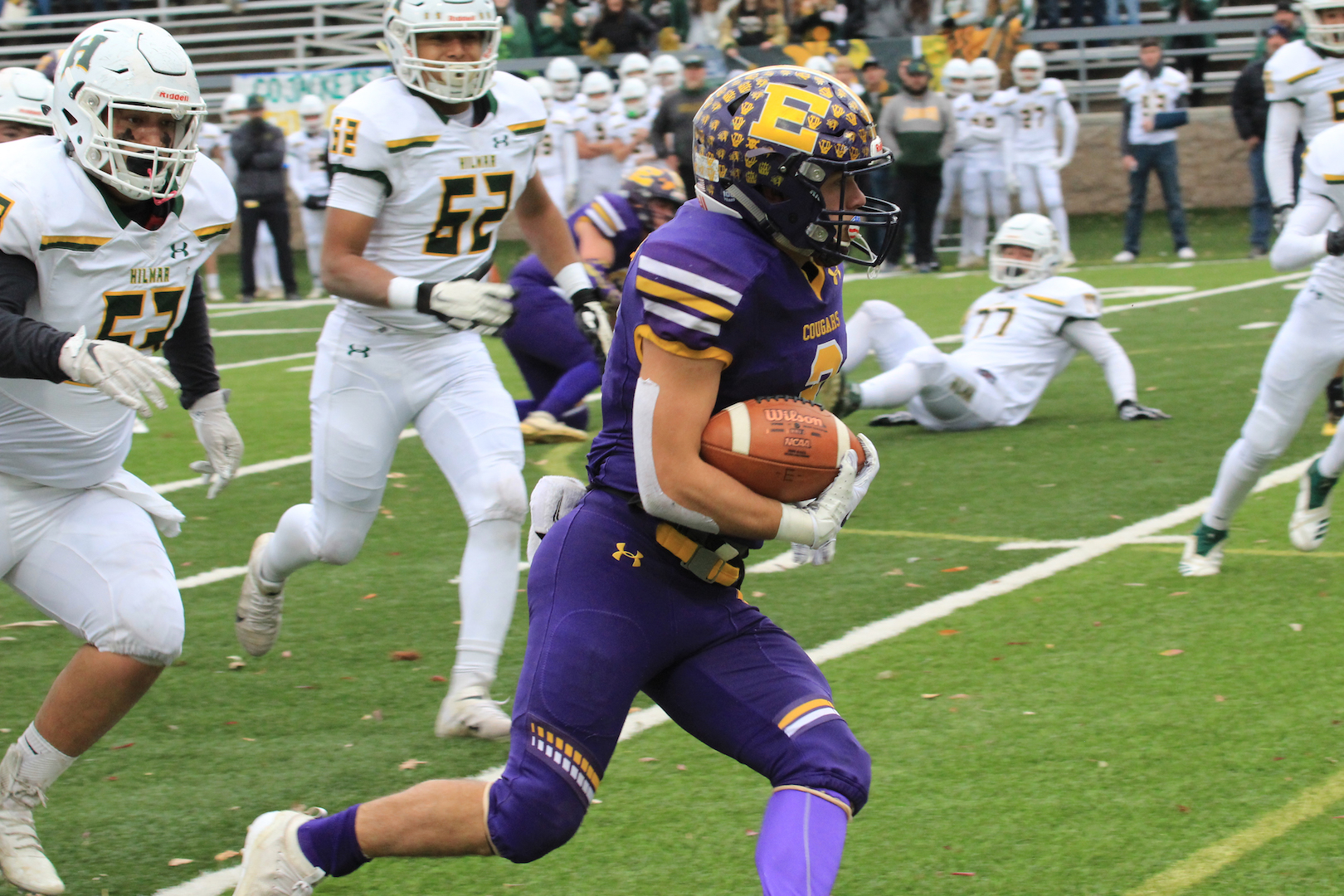 Escalon running back Kaden Christensen, shown here in the Sac-Joaquin Section Division VI final against Hilmar, carried the ball 15 times for 122 yards and caught four passes for 45 yards in the Cougars' 41-17 victory over Pleasant Valley in the CIF Northern California regional on Saturday, Dec. 7, 2019, in Chico, Calif. On defense, Christensen added an interception and six tackles. (Samantha Schmidt/Front Row Preps)

For the second time this decade, Escalon High’s football team will play for a state championship.

The Cougars advanced to their second CIF state championship game with a convincing 41-17 victory over Pleasant Valley (Chico) in the NorCal regional final. They’ll face La Jolla, a 27-14 winner over Marina (Huntington Beach), on Saturday at 6 p.m. for the state’s 4-A crown.

Escalon joins Trans-Valley League rival Ripon in playing for the state’s ultimate prize. One night earlier, the Indians defeated Sutter 31-17 in the 4-AA NorCal regional, advancing to take on Highland (Palmdale), a 42-29 winner over Selma in the SoCal finale.

“Our offense and our offensive line kind took over,” said Escalon’s second-year coach Andrew Beam. “We might be undersized, but I was just sure proud of our kids.”

The Cougars got the ball to start the second half and picked up right where they left off, embarking on a 14-play drive that chewed up seven minutes off the clock. Colton Panero capped things off with a 7-yard TD run that made it 20-9.

“That was the killer right there,” Vikings coach Mark Cooley told Sharon Martini of the Chico Enterprise-Record. “That killed us.”

By the time Pleasant Valley’s offense finally got back on the field, it probably seemed like it had been a week since its offense had seen the playing field.

Escalon rushed for 320 yards in the contest — Kade Christensen led the way with 122 yards on 15 carries — and held the Vikings to 99 yards rushing for the game and a mere 10 yards in the second half.

Pleasant Valley, the reigning 4-AA state champion, finishes the season at 7-6.
Escalon reaches the state title game for the first time since 2010, when title-game participants were determined by a selection committee. Since 2015, all section champions throughout the state have been eligible for regional bowl games.

The Cougars will host the CIF state final on Saturday at 6 p.m. at a site to be determined.