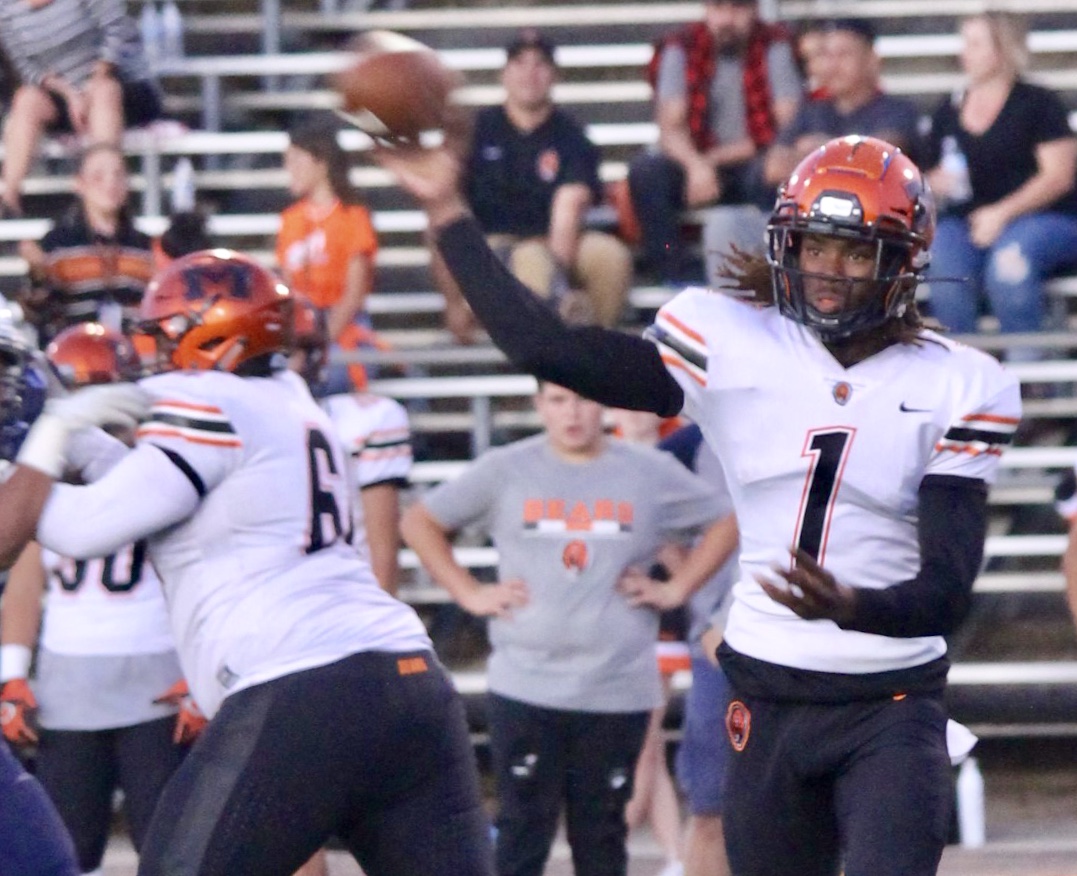 Merced quarterback Dhameer Warren rushed for two touchdowns and threw another as the Bears' knocked off Downey 47-44 on Friday, Aug. 31, 2018, at Chuck Hughes Stadium. (Joey Santos)

Beware of the Bear: Add Downey to the list of teams burned by Warren, Merced.

Dhameer Warren followed Xavier Stewart through a hole at the line of scrimmage, delivering the final blow in a slugfest between two of the Front Row region’s top large-school programs.

The Merced quarterback leaned forward, extending the nose of the football beyond the first-down marker, sealing a 47-44 victory over No. 2 Downey at Chuck Hughes Stadium.

“We were in the same situation a year ago against Pitman. All we needed was a first down to win the game and we didn’t get it. I told him, ‘I want you to get this.’ I put the ball back in his hands and he got it,” Merced coach Rob Scheidt said. “That’s part of the process. Even in failure you can learn something to have success later in life. I’m proud he had that moment.”

With the win, the Bears improve to 3-0 and continued their dominance of Modesto City Schools opponents under Scheidt, who is 17-2 against Modesto’s public schools, including back-to-back victories against its best. The Bears throttled Gregori last week and then matched bullets with Downey (2-1), which surged to No. 2 in the large-school poll following a come-from-behind victory over Manteca.

This time around, the late-game heroics belonged to Merced. Warren, who is being courted by Arizona and Nevada as a defensive back, engineered two fourth-quarter scoring drives.

He sprinted through the Downey defense for a 24-yard touchdown that made it 40-30 with 10:18 left. After Robert Rivera trimmed the lead to 40-37 with a 21-yard run, Warren floated a pass into Ezra Morales’ path.

With a step on his defender, Morales hit top gear in a flash, completing a 65-yard touchdown reception that made it 47-37.

The Knights skied the ensuing kickoff, but Merced fell on top of the ball. Warren never gave it back, diving forward to convert a first down on third-and-3 with less than two minutes left.

Downey’s defense struggled to get the Bears off the field all evening, and that problem was magnified with Xavier Stewart in the huddle. The Merced wide receiver-turned-punter converted two fourth downs in the first half. He gained 25 yards on a designed fake punt on the opening drive, and then another 23 yards on a botched punt that led to Warren’s 49-yard scoring run in the second quarter.

“Xavier Stewart flashes in my mind,” Scheidt said. “Him at punter. We couldn’t get a snap back tonight and what looked like huge losses, he ends up making big gains.”

Downey was also whistled for encroachment on fourth-and-4 on the final drive the first half. Four plays later, Merced quarterback Junior Garcia found Morales alone in the end zone to make it 26-17 at the half. Garcia threw two TDs.

Freshman Beau Green was 24 of 36 for 373 yards and two touchdowns, but he also committed three turnovers. He was intercepted twice and fumbled once with a chance to take the lead in the third quarter.

Peterson had nine catches for 139 yards, while Anderson Grover had five receptions for 102 yards. Jordan Wilson scored a touchdown and collected an interception.

Rivera was the unsung hero in Downey’s “Air Raid” attack. The junior running back kept Merced’s defense off-balanced and gashed the Bears for long runs. He had four runs of 14 or more yards, including a 17-yard touchdown scamper to start the fourth quarter.

There was just no stopping Warren and the high-powered Bears offense, which is averaging more than 47 points per game. After rotating QBs through the first three quarters, Scheidt stayed with Warren, a dual-threat now in his third varsity season.

“When Dhameer was in there, everybody was hesitant,” Scheidt said of the defense. “They don’t want to make a mistake because he can go to the house. At the end, we rolled with that.”