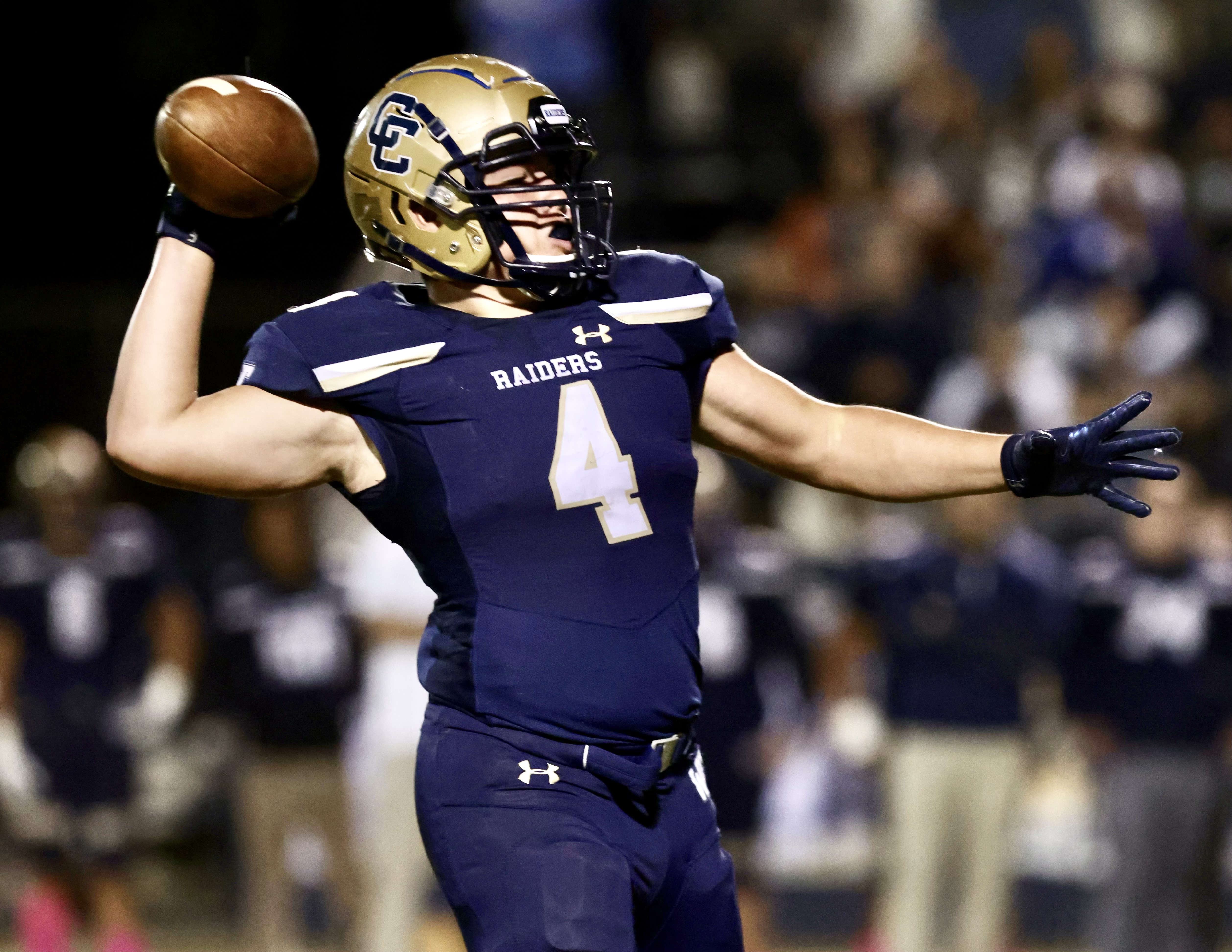 Central Catholic running back Julian Lopez ran for two touchdowns and hauled in another, but it was his 15-yard scoring strike to Jaelen Nichols that gave the Raiders the lead for good in a 56-33 win over Manteca. (Wayne Thallander)

'Big Rig' Lopez drives Central Catholic to No. 1 in the regional power rankings

Central Catholic running back Julian Lopez just wanted back on the field.

After four punishing quarters, Manteca couldn't wait for him to leave.

Built like a big rig, Lopez was sidelined for four games with a flat tire. He strained ligaments in his knee during a Holy Bowl victory at St. Mary's in Stockton. The 6-foot-2, 225-pound senior returned nearly a month later in a rout of Kimball and then took a star turn in last Friday's 56-33 victory against the Buffaloes.

Lopez rushed for 188 yards on a team-high 18 carries, and contributed four touchdowns to the blowout, finding the end zone in a variety of ways. He rushed for two scores, tossed another, and then tight-roped the sideline on a reception from sophomore quarterback Tyler Wentworth.

The Buffaloes (7-1, 3-1) began the night as the top-ranked large-school team in the region, holding a slim lead on the one-loss Raiders (7-1, 4-0). Manteca was undefeated, tested just once in a crosstown rivalry with East Union.

Central Catholic, braced by strength of schedule, staggered the Buffaloes with a heavy 1-2 punch out of the backfield. Aiden Taylor softened Manteca early. He rushed for 184 of his game-high 230 yards in the first half, including scoring runs of 52, 15 and 25 yards as the Raiders jumped to a 35-18 lead the intermission. Taylor pin-balled off tacklers and burst into space.

Coach Roger Canepa called Taylor's 25-yard touchdown with 23.2 seconds left was the game's biggest play, a turning point in this clash of No. 1-versus-No. 2.

That honor belongs to Lopez, who attacks with the subtlety of a sledgehammer. His style is heavy and relentless, and at times, unstoppable. He and Taylor averaged 10.4 and 15.3 yards per carry, respectively.

"You see our body types, eventually they get tired of getting hit," Taylor said. "Me and him, we live for the hitting."

Where Taylor finds creases and blends power and speed, Lopez makes his own space. In the second half, he plowed ahead for gains of 8, 4, 4 and 8 yards, before the dam came crashing down on the Buffaloes.

With about 90 seconds left in the game, Lopez fought his way through the crowd at the line of scrimmage and trucked into the open field. Manteca defensive back Lyon Colon reached for the ball and rode the Big Rig to the 1.

Sensing victory, Lopez stepped from the pile and flexed for the home crowd, punctuating his return from a month on the shelf.

"I was trying to put the game away," he said with a grin.

Lopez isn't solely brawn. His acumen and finesse saved the Raiders, who can clinch a share of the Valley Oak League title Friday against East Union. That final run was designed as a double handoff, Canepa said, but Lopez sensed pressure and kept the ball, rather than risk a turnover.

"A lot of things went our way," Canepa said.

Earlier, Lopez feathered a 15-yard touchdown pass into the corner for Jaelen Nichols to give Central Catholic a lead it would never relinquish, 14-7. The play was a tailback option pass, and it caught Manteca by surprise because this was the first time all season CC could run the play with Lopez.