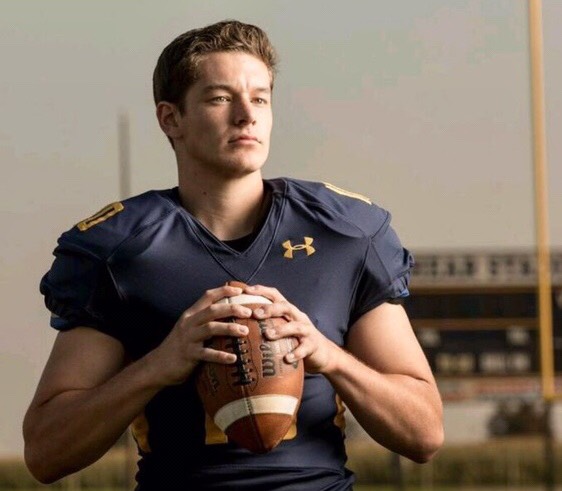 Former Gregori High quarterback Bobby Avina will walk on at Arizona State, where he's prepared to work his way up the depth chart for a Pac-12 program boosted by the hiring of coach Herm Edwards. (Avina family)

His junior season, the most important for an athlete with next-level ambitions, was cut short by a season-ending shoulder injury. Avina fractured the AC joint and shredded every ligament in his right shoulder on a regrettable QB sneak.

He missed the final six games of the 2016 season.

Though the injury set his development back and cooled his stock on the recruiting trail, Avina never lost sight of his goals.

He always knew his high school career would end this way: Wearing the colors of a major Division I college, surrounded by his closest friends, teammates and family as he announced his next destination.

Avina, the Modesto Metro Conference and Modesto Bee's player of the year this past fall, will join the Sun Devils as a preferred walk-on. He's been accepted for the fall semester and has received his nutritional and training regiments from the coaching staff.

"Don't get discouraged, that's the biggest thing," said Avina, who guided Gregori to its first unbeaten regular season, first conference title, and first home playoff win. "Lots of people are going to tell you you 'no' and tell you you're not good enough or you're not going to go where you want to go. But if you put in the time and do what you need to do, good things are going to happen.

"It stunk to hear 'no,' but after that you move on. I just kept on going."

Make no mistake about it: Avina isn't retiring the hard-hat mentality that defined his last two seasons at Gregori. He is a preferred walk-on, invited into camp by first-year coach Herm Edwards and offensive coordinator/quarterbacks coach Rob Likens.

There are the scholarship athletes on roster — "Their guys," Avina says — and then there are those like the 6-foot-2 Avina, the longshots and diamonds in the rough.

Avina, who ranked among the Sac-Joaquin Section's leaders in passing yards, touchdowns and efficiency, will do his best to impress in a quarterback room that includes five: senior Manny Wilkens, juniors Dillon Sterling-Cole and Blake Barnett, and freshman Ryan Kelley.

"I felt a good vibe about it all," Avina said. "When I went to their team meetings, I fell in love with it. It will be a challenge. Going in, I know they have their guys. I have to earn whatever is there. I won't be given anything; I've got to earn it. I have to work my butt off."

Avina's legacy at Gregori was born from a tireless work ethic.

He set the tone for his breakout senior season by respecting the recovery and rehabilitation process, then slowly ramped up his lifting and throwing programs. He routinely punched the clock before 6 a.m., earning the respect of his coaches and teammates.

The payoff was pronounced: 3,015 yards, 36 touchdowns against just five interceptions, a 67.5 completion percentage and a quarterback rating of 135.5.

"I've been through a lot of adversity, but I've done everything to get to this point," he said. "I'm prepared for the next step. I'm still nervous and got the jitters, but I'm ready to get on the field."