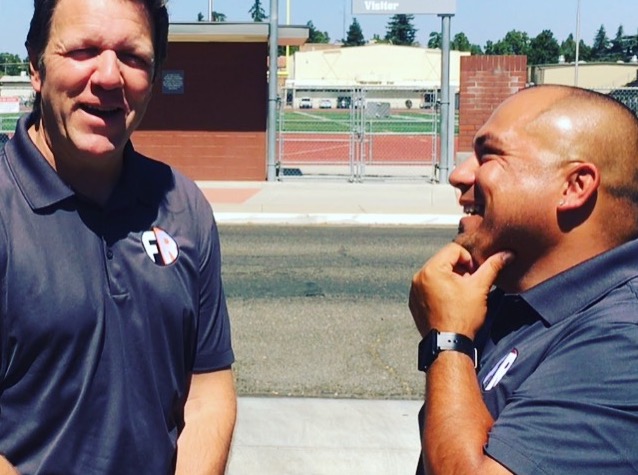 Bold or just bald? QBs split time across the region, and we're splitting the vote

It has been said that if you've got two quarterbacks, you've really got none. That's not the case this season as several teams in the Front Row region have utilized multiple quarterbacks with success.

Ripon Christian (2-0) has lit up the scoreboard through the first two games -- albeit against inferior Central California Athletic Alliance opponents -- with Cade Alger and Nolan Lingley pulling the strings. The Knights are No. 6 in the latest small-school poll and travel to Summerville (1-0) on Friday for a game of high interest in the Southern League. The Bears edged Mariposa last week, 10-9. Another strong performance by Ripon Christian will put the rest of the Southern League on notice, especially resident king Orestimba.

Central Catholic (2-0) has maintained its place atop the large-school rankings despite subbing out its dueling quarterbacks, Kyle Jackson and Dalton Durossette, every quarter. Jackson started the season opener at Clovis West, while Durossette got the nod at De La Salle. Their numbers are nearly identical, though Jackson did engineer the Raiders' only scoring drive against the Spartans.

Coach Roger Canepa says he's got to make a decision soon on a full-time starter, but don't expect it to come Friday against Holy Bowl rival St. Mary's (0-1).

Perhaps there's no greater example of the multiple QB system than Friday's showcase game between large-school No. 2 Downey (2-0) and large-school No. 5 Merced (2-0) at Chuck Hughes Stadium. Both programs feel comfortable with rotating their QBs, and it's hard to argue the logic. Downey has beaten back-to-back playoff teams, including two-time defending Sac-Joaquin Section champion Manteca, with junior Bryce Gouker and freshman Beau Green commanding the huddle. Merced has matched that effort, routing Del Campo and Gregori, with heavy contributions from Dhameer Warren and Junior Garcia. In fact, Garcia was nearly perfect in 14 attempts against the Jaguars.

And now it seems the Front Row's brass, Joe Cortez and James Burns, have embraced the split. In this week's episode of "Bold or just bald?", Cortez sides with his alma mater, Merced, while Burns, the "Bold or just bald?" leader through two weeks, picks host Downey to keep its rocket start alive.

Here's a look at all of our Week 3 predictions: