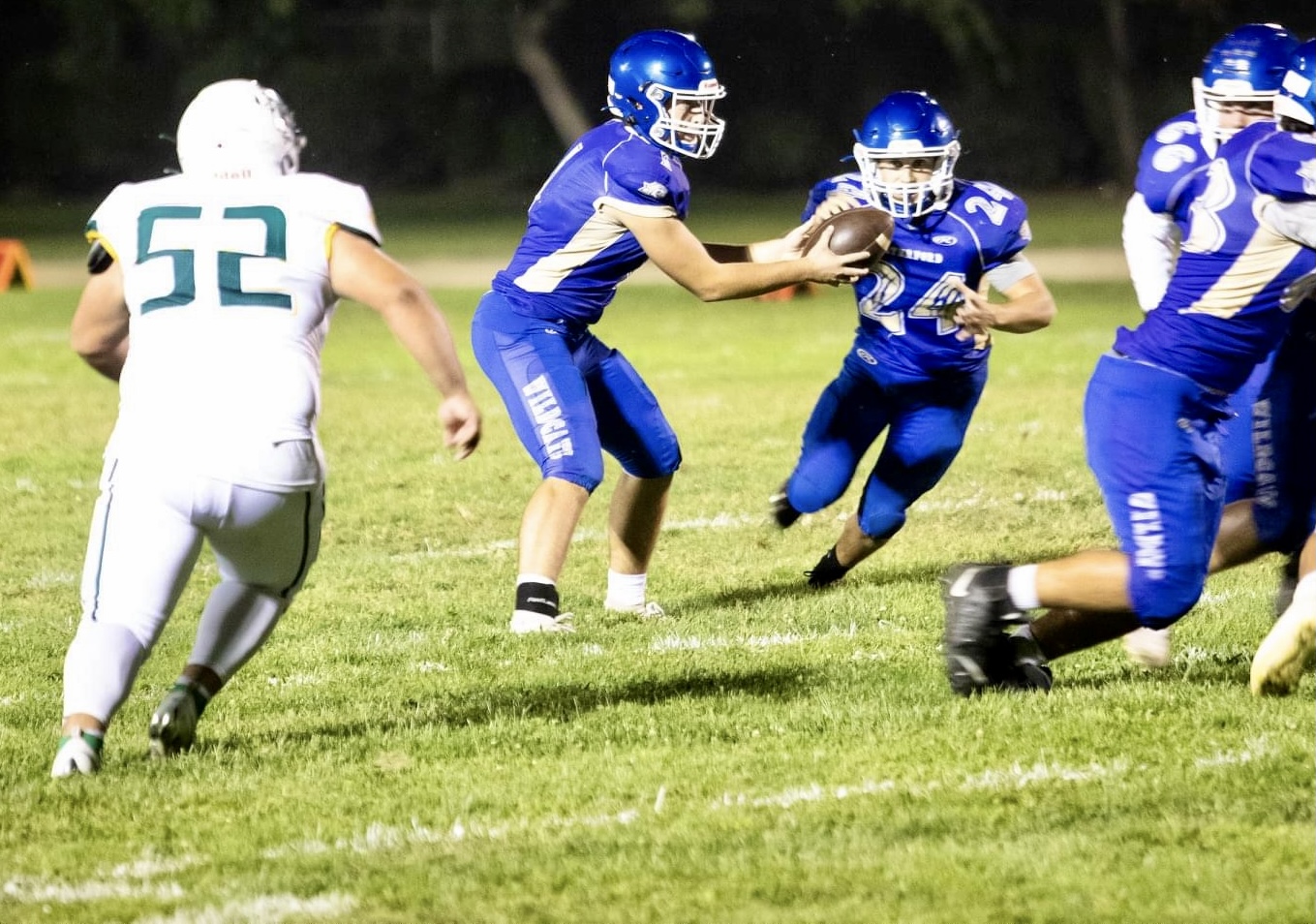 Waterford High senior quarterback Aaron Adams hands the ball off to senior running back Ryan Hilton during a victory over Le Grand. The Wildcats have won 10 consecutive games, a school record.

WATERFORD -- Competition runs hot and heavy in the Hilton household.

Seated around the dinner table, the meat and potatoes are spiced with playful banter, feedback and tough-love criticism. Such is the life of a high school football coach and his two varsity sons.

Games are never over.

“Sometimes, my wife has to remind us that we won,” Waterford coach Adam Hilton said with a chuckle.

The Wildcats (6-0, 3-0) have won at a record rate, too, rocketing up the regional power rankings and asserting themselves atop the Southern League heading into the home stretch of the regular season schedule. Small-school No. 4 Waterford has won 10 consecutive games dating back to last spring's shortened season, the longest such streak in school history.

The crowning jewel in this run – win No. 10 – was a thrilling 28-21 victory last week at Ripon Christian, a game that was settled in the final two minutes. Aaron Adams connected with Matthew Brinkman for a 12-yard touchdown, completing the Wildcats’ come-from-behind victory. Waterford had lost eight straight to the Knights.

“Last week was big,” Hilton said. “Our whole thing this year was to get to the playoffs. Whatever comes with that – a league title, whatever – it was always about getting to the playoffs. Now, where we’re sitting, it’s like can we get a top-4 seed?”

Waterford has positioned itself with a roster heavy with seniors, experience and lifelong chemistry. Hilton estimates that 90 percent of his 24-man roster has played together since they were 9 years old. In that time, he says that group has won a youth Super Bowl and lost only 10 games.

Adams pulls the strings for the offense. The senior quarterback has completed 66 percent of his passes for 867 yards with 12 touchdowns against just two interceptions. Adams accounted for three touchdowns in the win over Ripon Christian.

The Hilton brothers, senior Ryan and junior Caleb, provide balance out of the backfield. Ryan Hilton tops the ‘Cats with 664 rushing yards and six touchdowns, while his younger brother, Caleb, also has six TDs. Senior Javier Nusom is the top down-field target, with 534 yards. He has a third of the team’s total receptions.

Waterford is one of just three regional teams still unbeaten, joining large-school No. 1 Manteca (6-0) and Modesto’s Grace Davis (6-0), and the only small school flirting with a perfect season. To keep that run, though, coach Hilton said his team has to remain humble and hungry. After 10 wins, the Wildcats are no longer the hunter.

That has been coach Hilton’s message this week as his team prepares for a road trip to Gustine. With Orestimba looming, Gustine (2-3, 2-1) has the potential to be a trap game.

“When you win big games and when you win 10 in a row, every game is a big game,” he said. “That’s been our theme this week. … Last spring, we were hunting people. We wanted those games. Now, when we play Orestimba and the other teams, who is hunting who? We’re not used to that.”

That’s just one of many talking points around the Hilton dinner table, where football gets passed around like the salt and pepper.

“I never thought I’d coach them in high school,” coach Hilton said. “I enjoy it. They enjoy it, even if the younger one (Caleb) butts heads with me all the time. As long as we’re winning, ultimately, it’s all good.”

Waterford athletic director Joshua Whitfield believes Hilton, a coach who has walked the same path as his seniors, and a veteran staff are the common denominators.

"One of the main goals I have tried to have at Waterford as AD is consistency in coaching. When I took over we had a carousel of coaches coming in and out. Our football staff has been fairly consistent for four to five years now," Whitfield said. "I believe consistency builds tradition, and traditions build successful programs. These coaches and their players the last four to five years deserve all the credit staying the course and establishing a tradition and an identity of what Wildcat Football is about."