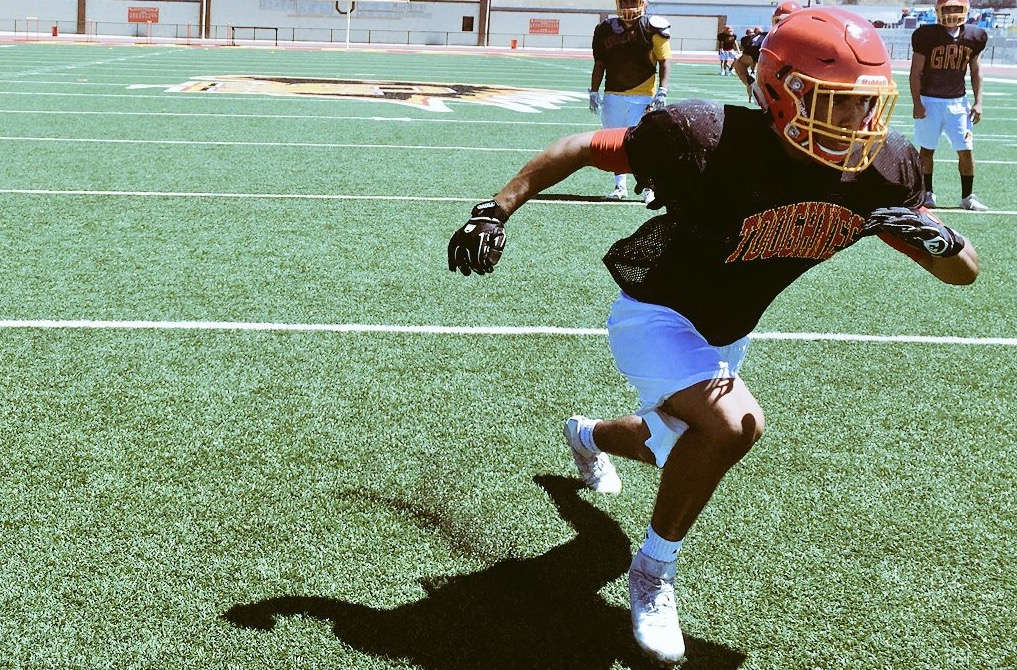 The Mustangs will hand the keys to the Wing-T to Saffar, who was a man amongst boys at the freshman level last fall. (James Burns)

Here to stay: A Mustang poised to run wild; others ready to launch their star

Saffar has the body type and innate toughness to handle the rigors of a Valley Oak League schedule, and he possesses the top-end speed and enough wiggle to leave defenders grabbing at air.

However, after nearly two decades at the helm of the area’s top rushing attack, Merzon understands there is one trait all of the program's greats shared -- and Saffar has in spades: Coachability.

Merzon said Saffar never makes the same mistake twice, and that will matter as he follows record-setting efforts by Will Semone, who rushed for 2,851 yards and led Oakdale to a CIF State Bowl in 2016, and Cameron Cherry, another 2,000-yard running back. Semone now plays at Cal Poly, while Cherry is part of a star-studded backfield at Modesto Junior College.

Saffar takes his turn in the vaunted Wing-T beginning Friday against Sonora, the Front Row’s top-ranked small-school football team, and he headlines a list of new faces on the cusp of a breakout season.

Beau Green, Downey: A true freshman, Green is locked in a battle with junior Bryce Gouker. Coach Jeremy Plaa said both could see time in Friday’s opener against East Union.

Baker Melendez, Gregori: A transfer from Beyer, Melendez hasn’t been in the Jaguars’ system long but has already earned the trust of his coach, Jason McCoy, and teammates. Melendez is a former Manning Passing Academy quarterback.

Zeke Saffar, Oakdale: The Mustangs will hand the keys to the Wing-T to Saffar, who was a man amongst boys at the freshman level last fall. Oakdale has had a 2,000-yard rusher in each of the last two seasons. Is Saffar next in line?

Michael Solario, Ripon Christian: A transfer from Central Catholic, Solario will be an impact player in offensive coordinator Randy Fasani’s system. He was a terror during the 7-on-7 season. “He was hard to cover,” coach Trey Ozenbaugh said.

Titus Rhiney, Gregori: Rhiney could be the breakout star in the Jaguars’ offense, a player with great vision, speed and agility. He’ll benefit from having the Longstreth brothers in the same offensive huddle.

Logan Donati, Mariposa: The departure of quarterback Colton Weidner puts the spotlight on Donati, who will look to build on a promising sophomore season. Though he’s just 5-foot-6 and 150 pounds, Donati is productive. He rushed for 667 yards and scored seven touchdowns last fall.

Johnny Williams, Modesto Christian: Williams is the Crusaders’ No. 1 receiver and has developed a strong rapport with quarterback Hayden Sauser, one the region’s top arms and a second-year starter.

Michael Sherrod, Davis: Only a junior, Sherrod was the summer standout in a group of talented young receivers. He’ll get his chance to put up big numbers, too. Davis returns quarterback Xavier Rodriguez, who threw for more than 1,900 yards in limited reps.

Minaya Olivo, Central Catholic: Olivo is part of a crowded backfield at Central Catholic and may find himself fighting Dawaiian McNeely and D’Angelo Bellamy for carries. However, he is a threat to go the distance each time he touches the ball. He’ll also roam the secondary for the Front Row’s top-ranked large-school team.

Nate Garcia, Patterson: Garcia did a little bit of everything for the Tigers last fall, but was often forced out of the spotlight by a talented senior class. He played six different positions for Patterson and had two pick-6 interceptions against Modesto.

Editor’s note: If you’ve got a player who belongs on our radar, please email their information to frontrowpreps@gmail.com.