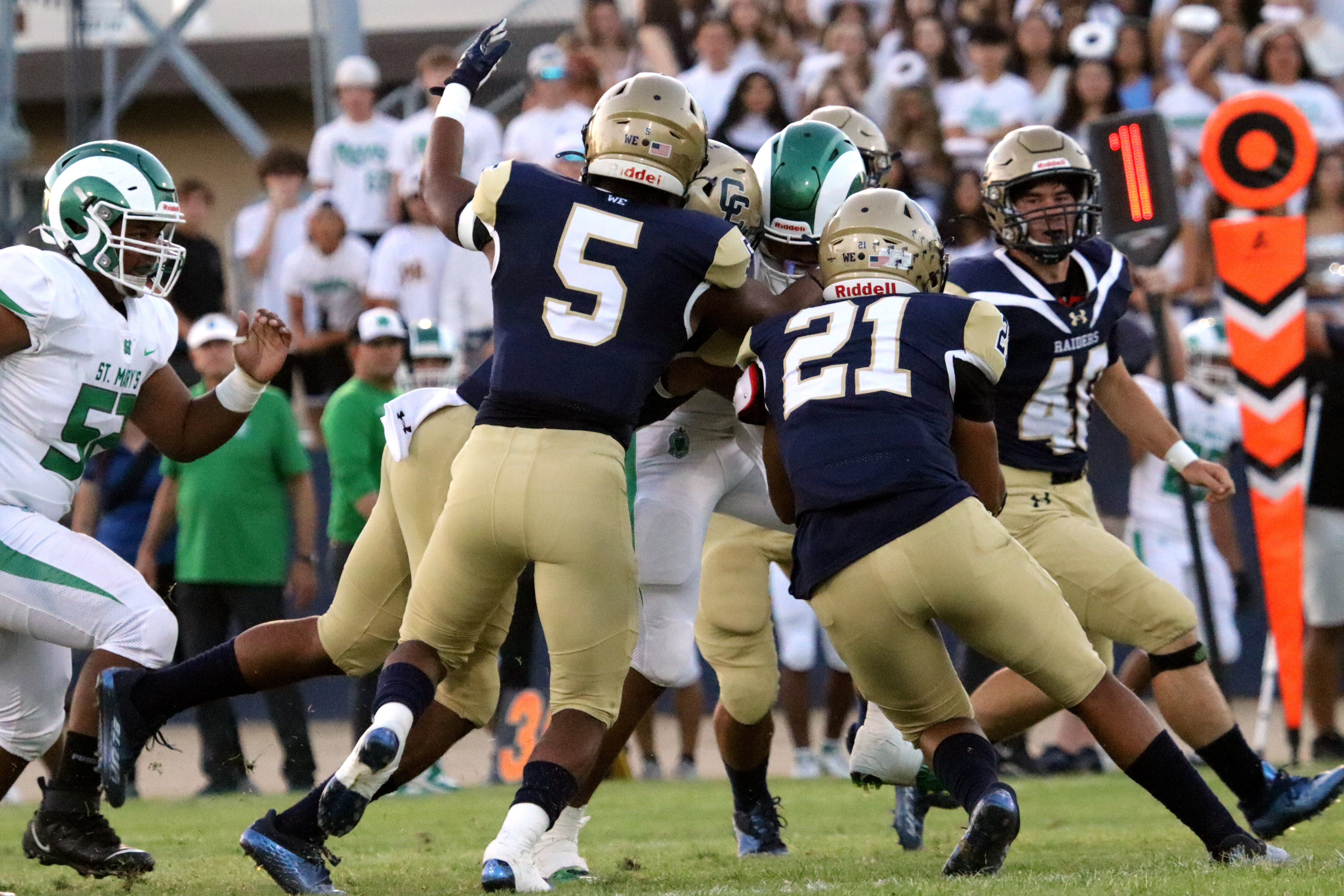 A host of Raiders come together to bring down a St. Mary's player during the Holy Bowl. The Raiders lost to longtime rival St. Mary's, 47-7, one of three consecutive losses for Central Catholic. (Samantha Schmidt)

Facing the third-most demanding schedule in all of the Sac-Joaquin Section (behind Folsom and Monterey Trail), the Central Catholic football team has found itself in an unusual position.

After opening their season with a decisive win over Merced, the third-ranked Raiders are on a three-game losing streak going into their final non-league game. Central Catholic began the season atop the region's large-school rankings, but have slipped two places behind No. 1 Manteca and No. 2 Downey.

“By playing quality people, you should get better. That’s the reason to play this schedule,” said Raiders head coach Roger Canepa.

Central Catholic, ranked No. 99 in California by MaxPreps, is definitely punching up. Their losses came at the hands of Saint Francis (No. 72), St. Mary’s (No. 43), and Serra (No. 9), and their next opponent is no pushover either.

Next week, the Raiders will travel six hours to Bellflower to take on St. John Bosco, the No. 1 team in the nation. The Braves (3-0) have only allowed 21 total points this season and have seven of the top-100 players in the country.

“If you wanna be the best, you gotta play the best, and we’re doing that,” said Canepa.

This week, Central Catholic is on a much-needed bye, and the Raiders hope to regain their full strength before taking on the Braves. Several Central Catholic players traded practice on Tuesday for physical therapy appointments.

“We are a little banged up. We’re going to catch our breath here and hit it hard next week,” said Canepa.

While the Raiders fell to Serra 42-30, Canepa was happy with the energy that his team played with and felt the game was closer than it appeared from the score alone.

“We gotta get better, clean up the little things, and play hard,” he declared.

“It’s a good thing that our coaches give us these games to experience, play at this high level, and expect perfection," he said. "It really prepares us for league opponents and playoffs.”

Savala also has a positive outlook. He doesn’t view their losses as defeats but lessons learned.

“It’s preparing us for when we face adversity and how to come back,” he said. “We can play anybody once we come together as a team.”

Samantha Schmidt is a reporter and photojournalist with FrontRowPreps.com.