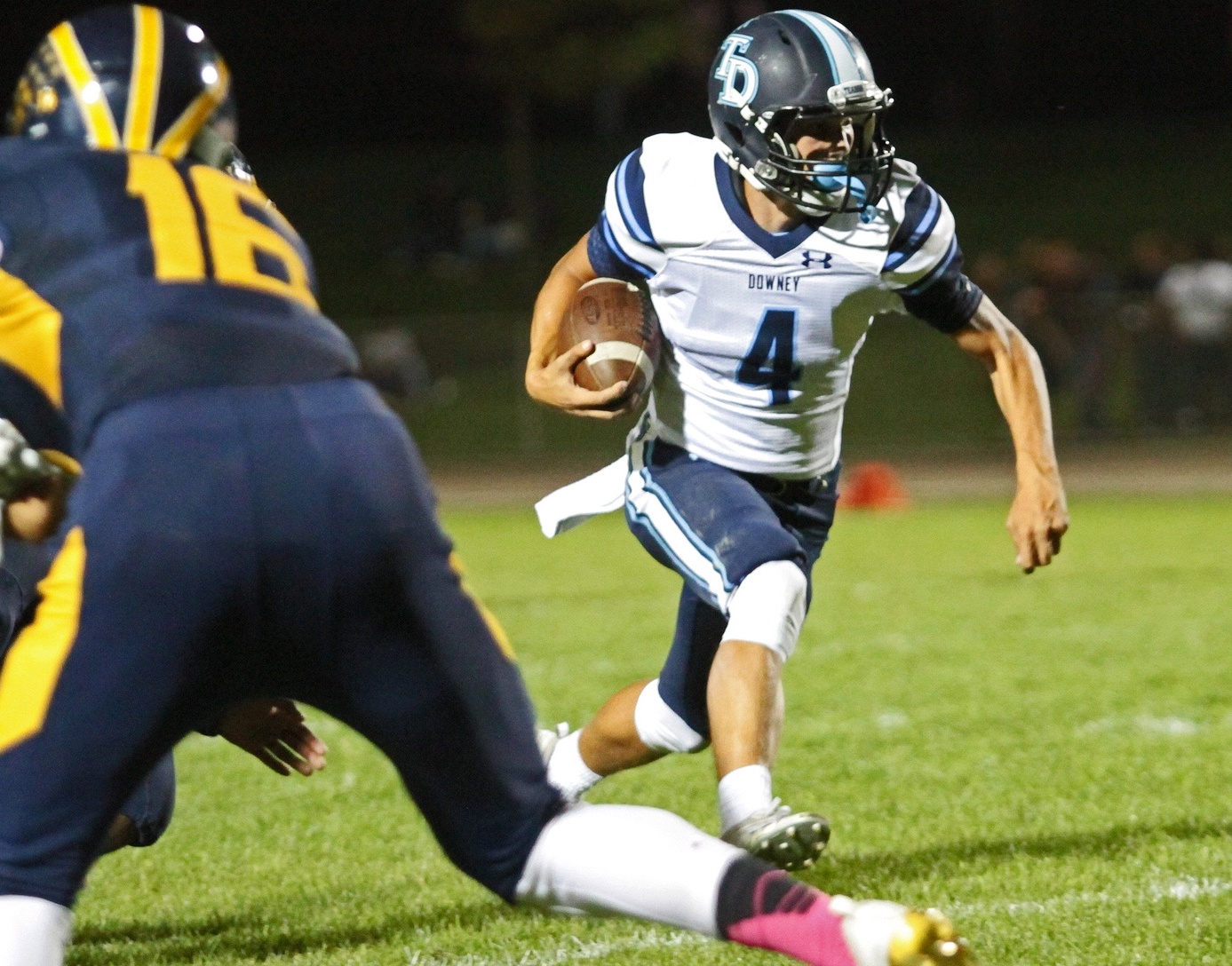 Downey receiver Bryce Peterson, a UC Davis commit, took a short screen 48 yards for a touchdown in a victory over Gregori on Oct. 12, 2018. (Daniel Harris Photography)

Last season, the final year of the Modesto Metro Conference, Downey and Gregori met in the final week of the season with the MMC title on the line, with Gregori getting the win that night and finishing the regular season with a perfect 10-0 mark.

This year, as members of the new Central California Athletic League, the teams met once again Friday night with essentially the same script in place.

Downey High held on to beat Gregori 20-14 and remain in contention for the inaugural CCAL championship. The Knights improve to 5-3 overall and 2-1 in conference play, and can still win the league banner outright. The Jaguars (4-4, 1-2), meanwhile, need tons of help just to salvage a co-championship.

Both teams, regardless of their current position in the league standings, remain in contention for playoff berths.

Holding a 20-14 midway through the fourth quarter and looking to put the game away with a trip inside the red zone, Gregori recovered a Knights fumble but couldn't take advantage of the break.

The Jags got the ball one last time, setting up shot on the Knights' 20 with 1:53 remaining. They eventually got to midfield, but had time for a Hail Mary pass into the end zone that was broken up.

Gregori struck first when Marcello Longstreth raced in from 30 yards. Downey tied the score when quarterback Bryce Gouker hit Bryce Peterson with short screen pass that went 48 yards for a score. Gouker and Peterson hooked up again later on a 27-yard strike to make it 14-7 in the second quarter. Gouker would add the Knights' final TD when he was flushed out of the pocket and ran it in from the 3.

Pitman 21, Modesto 10, at Chuck Hughes Stadium — Quarterback Treyton Fair hit Denzel Steckwren on a 61-yard scoring strike midway through the fourth quarter that put the Pride ahead to stay as they ran their record to 8-0 with a win over the Panthers.

Pitman now must face Downey (at Chuck Hughes Stadium) and crosstown rival Turlock the next two weeks to wrap up a perfect season. Modesto, meanwhile, drops to 0-3 in the league and is eliminated from CCAL title contention.

Turlock 40, Enochs 13, at Turlock — For the second week in a row, Lucas Curtis scored four touchdowns in leading the Bulldogs to a CCAL win over the Eagles. The reigning Large School American Chevrolet Athlete of the Week carried the ball five times for 73 yards, caught three passes for 121 yards. Curtis hauled in a 70-yard TD pass from Jonah "The Polish Eagle" Kosakiewicz, then had scoring jaunts of 30, 5 and 27 yards.

The Bulldogs remained on a collision course with crosstown rival Pitman in a winner-take-all showdown for the inaugural CCAL title.