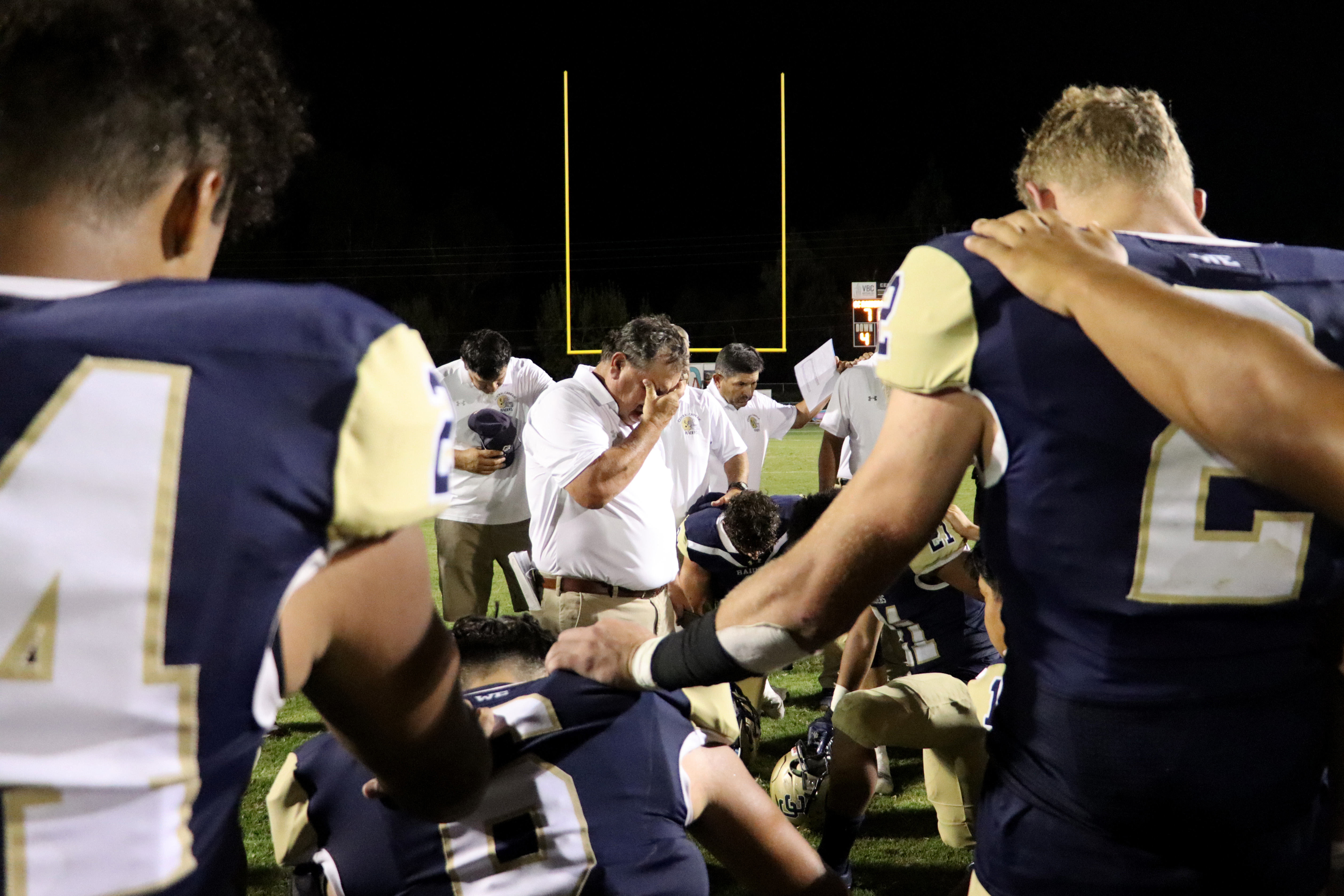 Central Catholic head coach Roger Canepa shows his disappointment as his team gathers in prayer after their 47-7 loss to Saint Mary's in their annual grudge match, The Holy Bowl.. (Samantha Schmidt)

CC coach after Holy Bowl debacle: 'We will never, EVER, play this way again!'

MODESTO – The post-game scene on the floor of Patton Field perfectly summarized the 32nd Holy Bowl on Friday night.

The St. Mary’s High Rams rejoiced as they held high the Rev. Msgr. William Burke Memorial Trophy, which they just reclaimed with their 47-7 rout of Central Catholic.

But barely 30 yards away, the hushed Raiders heard the message they figured to hear from emotional coach Roger Canepa.

“We will never, EVER, play this way again!” he yelled.

The Raiders trailed 34-7 at halftime and, after the Rams’ sixth touchdown, the officials wound the clock for the final 8:42.

Homecoming did not go as planned for Central Cathoic (1-2).

“It’s never good to lose like this,” admitted CC receiver-defensive back Trace Hernandez, who scored his team’s only touchdown. “There might have been a little distraction going on…This won’t happen again.”

Hernandez sped underneath a looping pass over the middle from Tyler Wentworth and finished off a 79-yard catch-and-run to put Central Catholic in front 7-6 midway through the first quarter. The Raiders’ lead lasted exactly 16 seconds.

Brooks Wheatley gathered in the kickoff, angled to his left and easily raced 84 yards for the touchdown that keynoted a mildly surprising runaway victory.

St. Mary’s (2-0), faster to the ball on defense, took advantage of its elusive receivers on offense. The game trended toward the Rams from the start.

“I’m so proud of our team,” veteran St. Mary’s coach Tony Franks said. “We have a tremendous amount of respect for Central Catholic. We just played our butts off…This was a very significant win for our program."

St. Mary’s, which leads the Holy Bowl series 19-13, dominated with a passing game led by junior quarterback Samson Hunkin. He remembered the difficulty of last year’s 41-27 loss to Central Catholic, when he was forced into the game due to injury.

His response a year later: 188 passing yards and two touchdowns, plus a rushing TD. His 14-yard dart to Naseri Danielson in the end zone—well-placed over Danielson's shoulder against decent coverage — gave the Rams a 27-7 lead.

“This was a night of redemption for Samson,” Franks said. “I told him he could take the trophy home tonight.”

Central Catholic was outgained 389-241. The well-prepared Rams also contained Raiders tailback Tyler Jacklich (12 carries, 46 yards), who did not play in the second half due to several injuries.

The Rams also pressured Wentworth, who completed only seven of 18 passes  for 148 yards. St. Mary’s parlayed both his interceptions into touchdowns.

Rasmussen, showing off a strong arm, completed five of six passes for 75 yards and a touchdown. The Rams’ effective passing offense figured decisively in their scoring marches of 67, 81, 80 and 80 yards.

Meanwhile, the Raiders’ threats were stopped at the St. Mary’s 26 and the 14.

Canepa’s concern, which centered on his team’s loose play, also can be traced to the upcoming schedule. Central Catholic, already bothered by injuries, continues next Saturday at Serra of San Mateo. After a bye, the Raiders travel to national powerhouse St. John Bosco.

“I’ve been doing this a long time. I can fix stuff,” Canepa said. “We had no energy. We made a lot of bad mistakes. We’re better than this.”