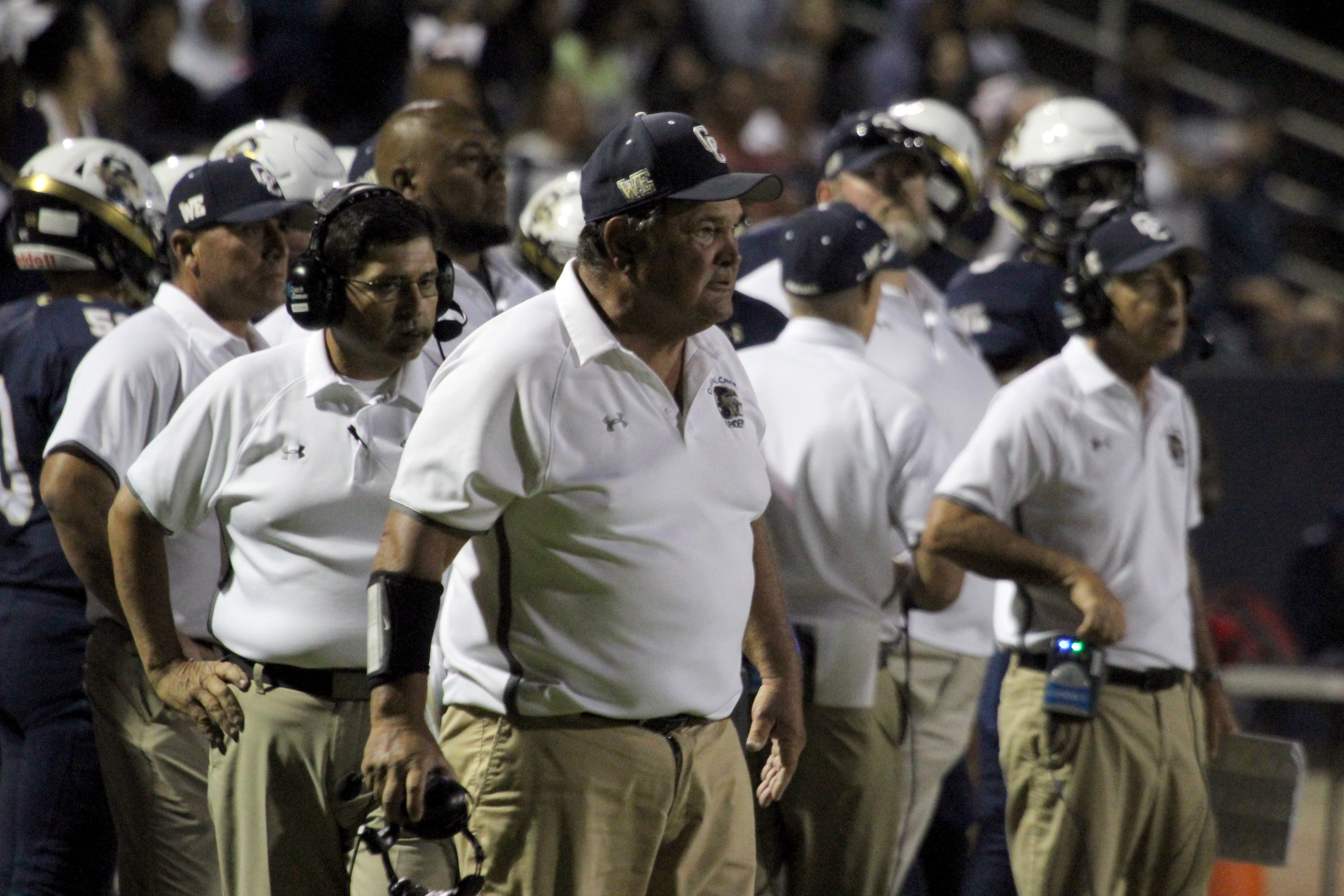 Despite Central Catholic earning a 35-28 victory over Manteca in the Valley Oak League opener on Friday, Sept. 14, 2018, Raiders head coach Roger Canepa was not pleased with his team's performance. (Samantha Schmidt)

Roger Canepa huddled his players near midfield and let them have it. In fact, the way the Central Catholic head coach tore into his team, you'd have thought the Raiders just lost their Valley Oak League opener Friday against Manteca at David Patton Field.

Central Catholic was a 35-28 winner, but the sloppy play angered its coach.

"We're better than that," said Canepa, whose team improved to 4-1 overall, it's only loss being to powerful De La Salle in the second week of theseason. "We were undisciplined. We are not going to win big games if we don't get better. You've got to  rip 'em when they need it and you've got to hug 'em when they need it, and they needed to know I wasn't very happy. I mean, they can't be happy. It was ugly."

Twelve penalties, a drop of a certain touchdown pass,  six fumbles (two lost) and  multiple blown coverages in the secondary  ... there will be plenty to work on in practice over the coming weeks. And that's silver lining For Canepa: the toughest stretch of the season is behind the Raiders. After games against Clovis West, De La Salle, St.Mary's, Lincoln and the league opener with Mantca, Central Catholic has four games against teams -- Sierra, East Union, Weston Ranch and Kimball -- with a combined 5-12 record .

"We had some injuries, we lost one of our linemen, we had a DB that is not around, we've got guys injured," Canepa said. "We moved the ball. Thank God we moved the football because we didn't play well. We blew coverages. It's been a long week."

Earlier in the week, Canepa finally decided on a starter at quarterback. After platooning through the first four games of the season, the job was given to Daulton Durossette on a full-time basis for the Manteca game. He completed 6 of 9 passes for 162 yards -- impressive numbers, that could've been more impressive if not for a dropped pass that likely would've gone for a 65-yard score.

"Being announced the starting quarterback at a powerhouse football team, coming from where I came from is an honor," said Durossette, a transer in from Ceres. "To play for the Central Catholic family, I couldn't be more proud and more humbled than I am right now."

Dawaiian McNeely carried the ball 23 times for 215 yards and two touchdowns, while Kyle Jacklich chipped with 103 yards and three scores, one on an impressive 43-yard run for the game's first score.

But while the Raiders moved the ball, they also committed silly penalties and put the ball on the deck six times to stymie their own cause.

Central Catholic's defense proved stingy against the run, but had several breakdowns in the secondary and struggled to contain quarterback Ryan Ward, who was 24-of-42 for 332 yards and four touchdown passes. Jorge Cedano  (11 receptions, 120 yards, 2 TDs) Jacob DeJesus (9 receptions, 160 yards, 2 TDs).

Tied 14-14 in the third quarter, Central pulled ahead on a 1-yard run by Jacklich, who was stopped just short of the goal on the previous play after picking up 14, then finally broke serve midway through the third when McNeely scored on a 31-yard jaunt.

Manteca drew to within one score on a 15-yard Ward-to-Cedano hook-up with 16 seconds left, but Central Catholic recovered the ensuing onside kick.