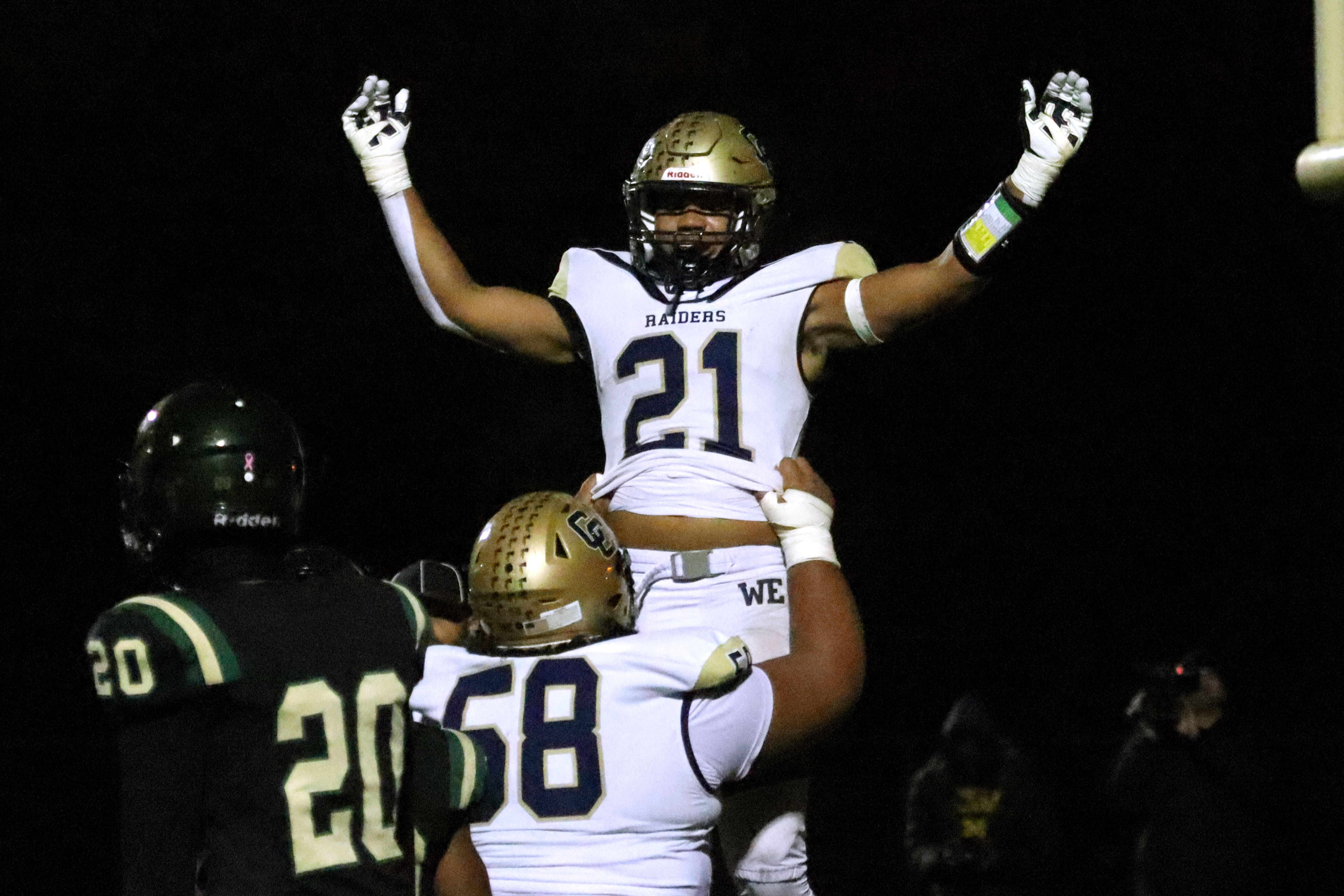 'Game over for them': Another big night for Jacklich as CC whips Monterey Trail

It was cold enough to see their breath in the air, but the Central Catholic Raiders were on fire in the CIF Sac-Joaquin Section Division I quarterfinal versus Monterey Trail of Elk Grove. The Raiders tamed the Mustangs, 56-29.

Head coach Roger Canepa was pleased with his team’s performance at the end of the night. “We did a good job. We’re getting better every week. I think it’s seven wins in a row now. We were one 1-4 (at the beginning of league play), people had us buried,” he said. “We’re happy now.”

Central Catholic running back Tyler Jacklich was the brightest flame on the field. Jacklich scored four touchdowns in a row to secure the Raiders' dominating lead. Jacklich, who is closing in on 2,000 rushing yards for the season, was also the Raiders’ go-to carrier. He credits his success to his line.

“They open up that hole for me. I just got to break one tackle and it's game over for them,” he said.

The first spark of the night was lit when Tyler Paul Wentworth scored a touchdown with a quarterback keeper after several carries by Jacklich got them to the 2-yard line. Xavier Diep’s kick (8 for 8) brought the score to 7-0. The Mustangs struggled to find their rhythm in the first quarter and dealt with both a sacked quarterback and a fumble recovered by the Raiders.

The second quarter opened with the Raiders in possession. Just two minutes in, tight end Joel Robert scored his 10th career touchdown and brought the Raiders up to 14. Senior Roland Brown broke up the Mustangs' next play with an interception, but the Raiders were unable to capitalize on it.

After retaking possession of the ball, on 4th down, the Mustangs picked up 35 yards on a fake punt. Putting Monterey Trail on the board with 2 minutes left in the half, Mustang running back Ali Collier scores after a quarterback keeper got them inside the 10-yard line.

To close out the half, Jacklich scored the first of his four touchdowns with 30 seconds left in the second quarter. At halftime, CC led 12-7.

The Raiders returned to the field after a pep talk from Coach Canepa determined to increase their lead. Jacklich scored another two touchdowns before the quarter was halfway over.

While a car doing doughnuts in the parking lot briefly distracted the crowd and those on the sidelines, Jacklich took possession of the ball at the 29-yard line and charged down the field. He narrowly avoid being pushed out of bounds around the 15-yard line and earned his fourth touchdown of the night.

The Mustangs responded immediately. Collier was untouchable on a 75-yard kick return touchdown. The extra point was unsuccessful and the Mustangs continued to trail 42-13. The Raiders continued their campaign.

Tiago Armstrong covered the Mustangs’ short kick and the Raiders started from their own 48-yard line. Wentworth completed a 33-yard pass to Trace Hernandez and brought the score to 49-13 to close out the third quarter.

Monterey Trail opened the fourth quarter strong with a two-yard rushing touchdown followed up by a solid two-point conversion, it wasn’t enough. With the score at 49-21, a running clock was instituted as tensions began to rise on the turf.

The clock didn’t deter the Raiders. With 8 minutes left, Robert caught a pass and forced his way through a party of Mustangs to score his second touchdown of the game. Though down by 34, the Mustangs kept fighting. After being brought down at the “one-millimeter line,” Daelin Ellis scored what the announcer called “the shortest touchdown run in school history. In the end, The Central Catholic Raiders tamed the Monterey Trail Mustangs 56-29.

Next week, the Raiders take on perennial powerhouse Folsom and they are chomping at the bit for the challenge. “We’ve been on the road. We played Bosco in LA so we’re ready,” said Canepa. “They wanted us to play Folsom so they got it!”

Jacklich plans to celebrate tonight's win but is ready to be back in the game tomorrow.

“We really want this Division I section title. Central Catholic has never done it before and we want to be the first team to do it,” he stated. “I definitely think we have the potential.”

Quarterback Wentworth agreed wholeheartedly, “They’re a great team and a great challenge and we’re up for the challenge…I think we’re playing our best right now. I can’t wait, I’m so ready.”