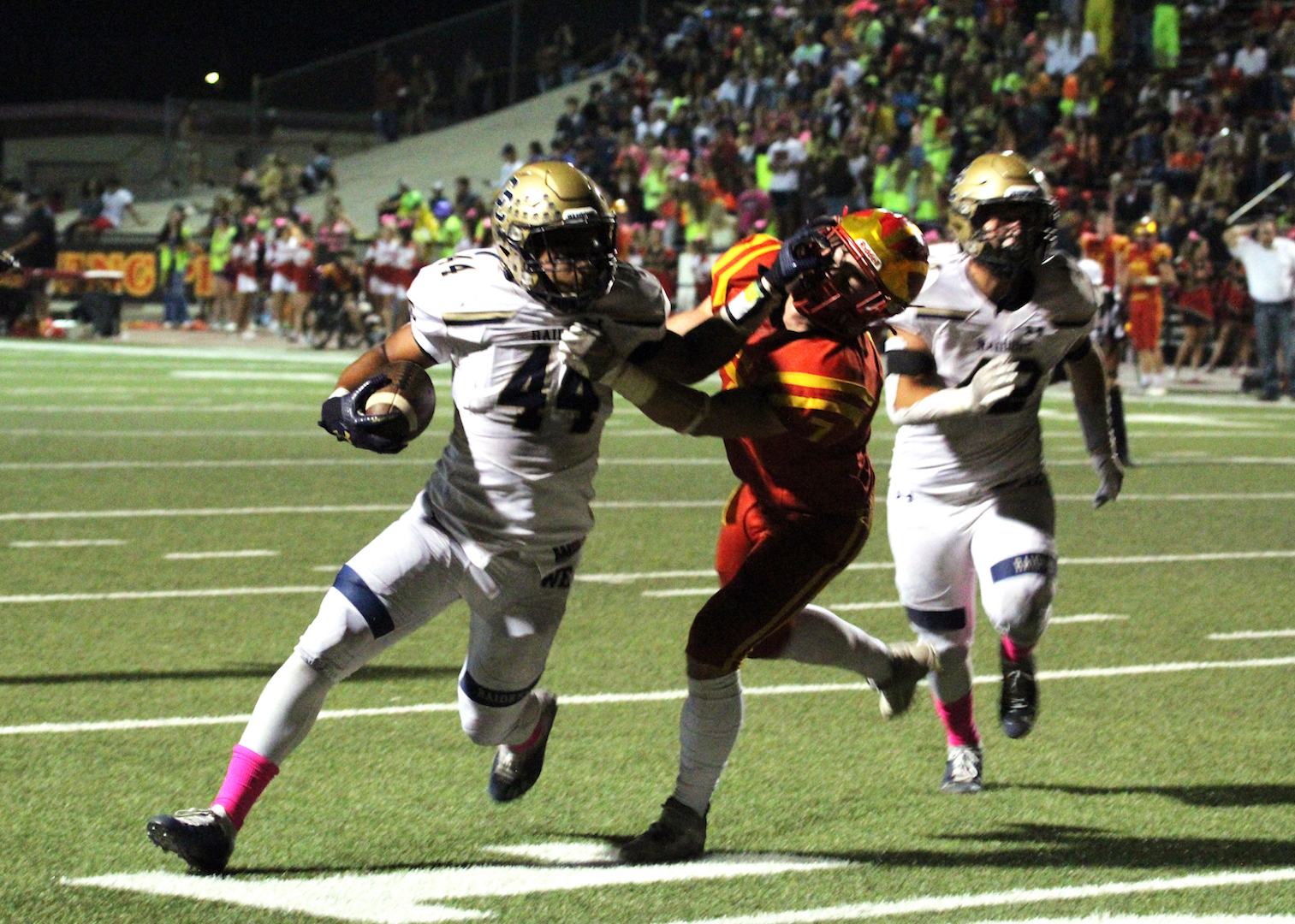 OAKDALE – Aiden Taylor embodies the 2021 Central Catholic Raiders – 210 pounds, straight-ahead tough and as hard to bring down as an unfriendly steer.

Taylor seldom left the field Friday night and his impact was felt both ways – by his inspired teammates and the Oakdale defense trying to gang-tackle him to the turf. By the time he was done, he scored two second-half touchdowns as the Raiders pulled away to win 32-14 and take early control of the Valley Oak League race.

His numbers weren’t pretty – 24 bullish rushes for 77 yards – but most came after halftime. Taylor also anchored a defense that limited the Mustangs – averaging 51 points a game – to only five first downs and 25 yards in the second half.

A 14-10 Oakdale halftime lead evaporated faster than a capacity crowd could exit the Corral. The Raiders (5-1, 2-0) reverted to inside-the-tackles strength and pushed Oakdale back with their larger linemen.

“He (Central Catholic coach Roger Canepa) told us to stick our heads down and run it right,” Taylor said in reference to his coach’s halftime message. “Our defense filled the gaps and handled their traps. When they had to throw, we were able to take control of that.”

The Raiders, though not deep, punish opponents up-front with 290-pound senior Jericho Machado and even larger teammates. Defensively, that size caused problems for Oakdale's Wing-T attack.

The Mustangs’ field position also was leveraged by Central Catholic kicker Anthony Wildenberg. The slim senior hit a 30-yard field goal, all three of his extra points and crushed all six of his kickoffs out of the end zone.

Add four turnovers (leading to 19 points) and eight penalties, and Oakdale’s hill grew too steep to climb. Its troubles began on the first play from scrimmage when Ayden Halvorson pounced on Jackson Holt’s snap fumble. On the next play, Central Catholic sophomore Tyler Wentworth rolled to his left and found Mario Savala alone for a 17-yard touchdown strike.

Central Catholic responded with brute force – bruising marches of 80 and 62 yards. Taylor climaxed both with TDs, the latter when he spun free of a  one-on-one-tackle at the 10 and raced to the pylon to increase the Raiders’ lead to 25-14.

Between those scores was a pivotal play on defense. Central Catholic chased Holt 21 yards back to his own end zone, where Taylor batted the ball loose. Oakdale was fortunate to recover for a CC safety as the Raiders sustained their momentum.

Defensive back Roland Brown clinched the win with his second interception and long return. Tyler Jacklich triggered the CC celebration with a 7-yard TD run.

Tellingly, it was another inside blast.

“We found a little gap (in the second half), threw it a little, spread it out and kept them off balance,” Canepa said. “It was the old style.”