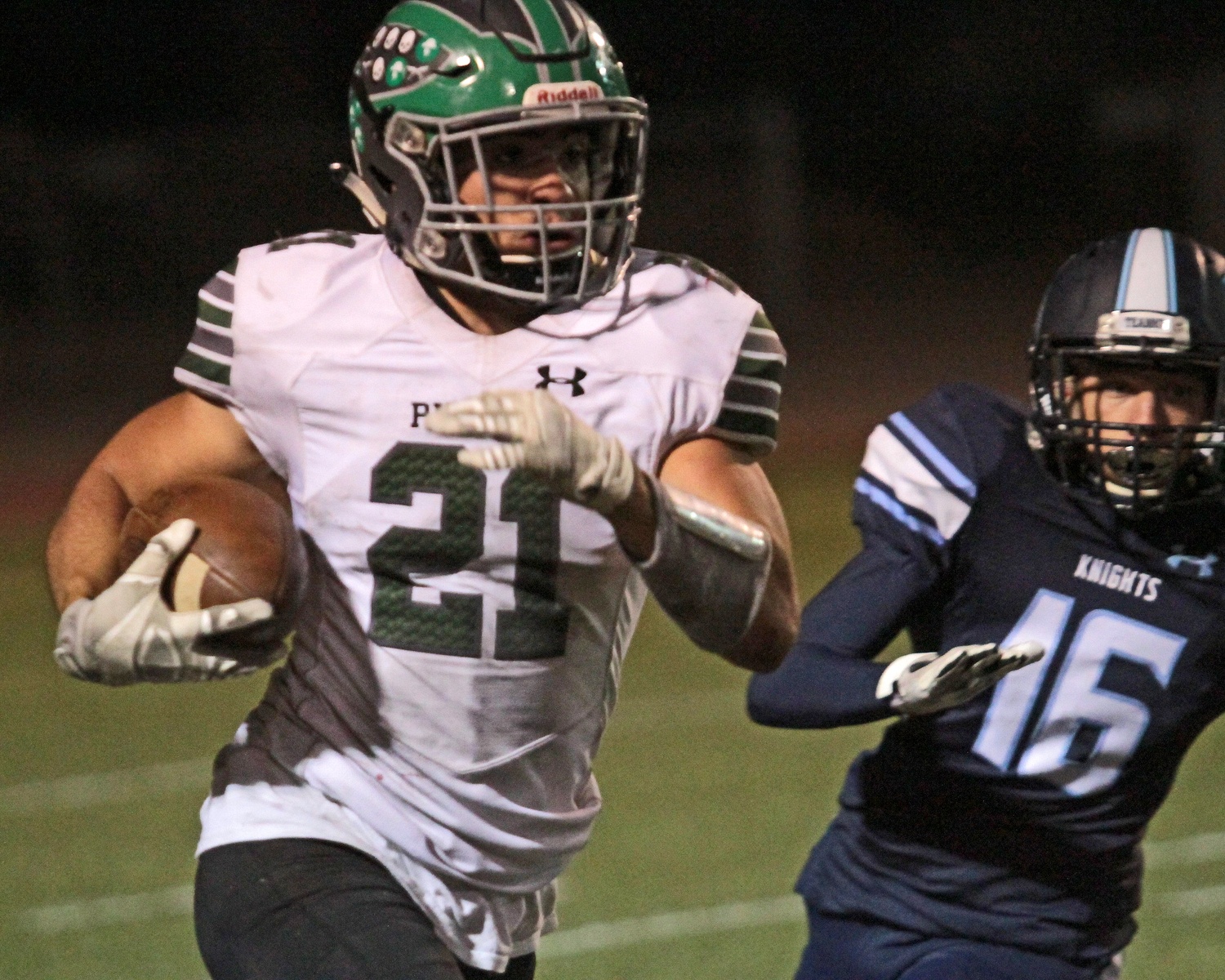 Pitman running back Garrett Bosch runs away from a Downey defender during a 37-33 victory over Oct. 19, 2018, at Chuck Hughes Stadium. (Daniel Harris Photography)

Large and in charge: CCAL, VOL, WAC titles will be decided by rivalry games.

1. (1) Central Catholic (8-1, 5-0): The Raiders won their seventh consecutive game with a 70-19 defeat of Kimball and can clinch the outright VOL title with a victory at Oakdale in their regular-season finale. Central Catholic racked up a season-high 617 yards of offense, including 405 and eight TDs on the ground. Next: at Oakdale.

2. (2) Merced (9-0, 5-0): The Bears can wrap up a perfect regular season — and possibly a top seed in the Division III playoffs — with a victory over another resurgent program, Mayor’s Cup rival Golden Valley. Next: vs. Golden Valley.

4. (4) Turlock (6-3, 4-0): The Bulldogs scored 35 unanswered points in a 63-21 victory over Gregori, blowing open a game between reigning conference champions. Quarterback Jonah Kosakiewicz rushed for a game-high 182 yards. Next: vs. Pitman.

5. (6) Manteca (6-3, 4-1): With a 50-7 victory over Sierra, the Buffaloes kept their slim VOL title hopes alive. Manteca needs to beat East Union in its regular-season finale and hope Oakdale knocks off season-long No. 1 Central Catholic. Next: at East Union.

6. (5) Downey (5-4, 2-2): Despite another strong performance from junior quarterback Bryce Gouker (18 of 20, three touchdowns), the Knights were eliminated from the CCAL title picture with a stunning loss to Pitman last week. Downey led 33-23 going into the fourth quarter. Next: at Modesto.

8. (8) Buhach Colony (7-2, 4-1): The Thunder survived a scare from upstart Golden Valley, which refused to let the Buhach Colony Fly offense to take flight. Rising recruit Trey Paster highlighted the 26-21 win with two early touchdowns, including a 77-yard scamper. Next: vs. Atwater.

9. (9) Pacheco (8-1, 6-0): The Panthers clinched at least a share of the program’s first league championship with a 56-23 victory over winless Beyer. Marcus Ordunez scored three rushing touchdowns in the first quarter for Pacheco, which can take sole possession of the WAC title with a win over surging Los Banos. Next: at Los Banos.

10. (nr) Los Banos (6-3, 5-1): The Tigers can force a title share in the WAC with a victory over Pacheco in the Crosstown Clash. Junior Justin Incaprera has carried Los Banos down the stretch with back-to-back 200-yard rushing games. Incaprera has 480 yards the last two weeks, including 248 in a 42-7 win over Lathrop last week. Next: vs. Pacheco.