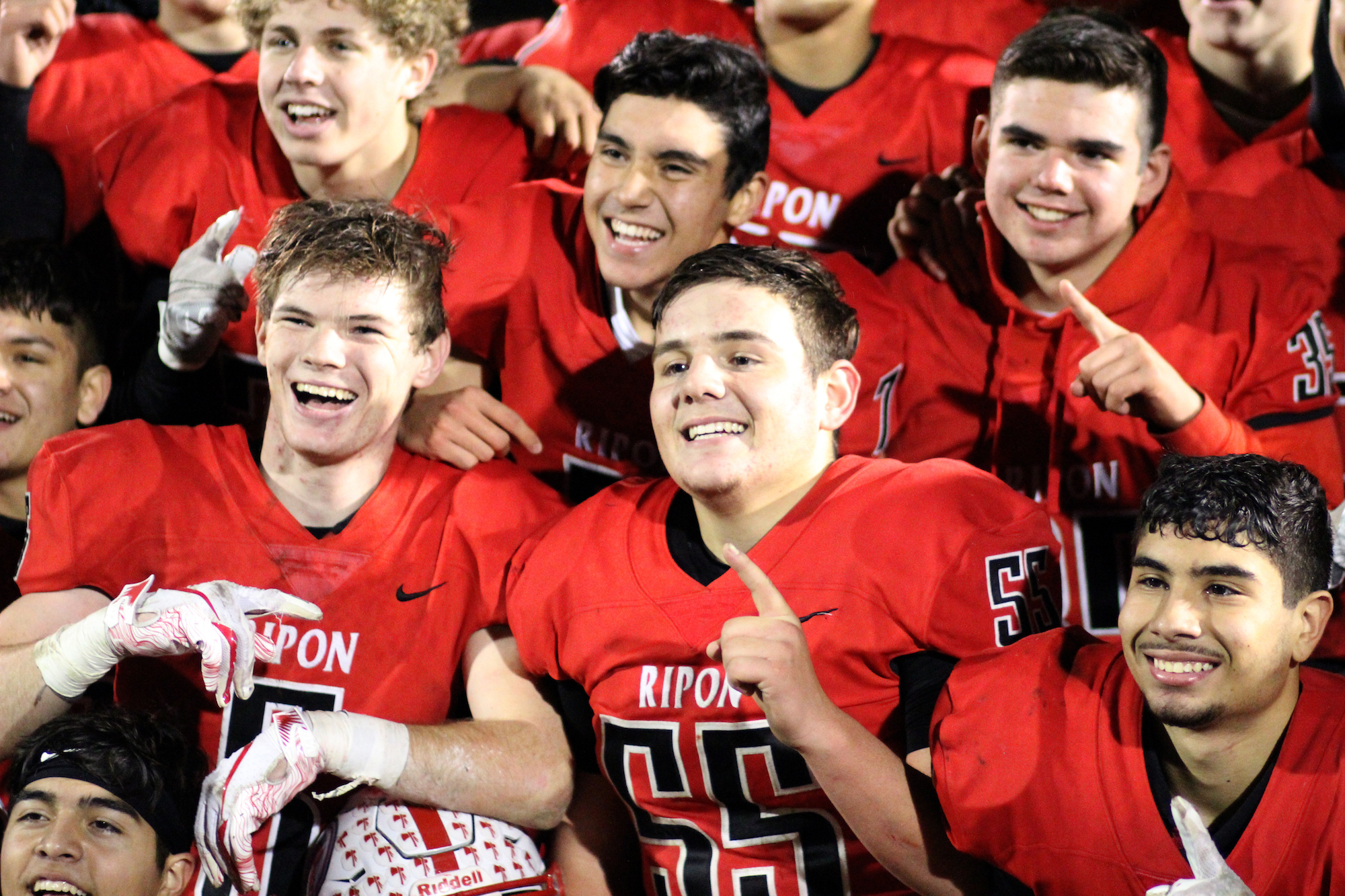 RIPON – The rain fell and a crosswind blew as Ripon High senior Nathan Valdez, fatigued from 2½ hours of blocking and tackling, gathered himself Saturday night for the moment of his young life.

Around him, his teammates geared for Valdez’s 36-yard field goal that would decide the CIF State 4-AA championship. Caleb Johnston, the sophomore snapper, made sure his hands were dry. Senior quarterback Nico Ilardi, the holder, relied on the muscle memory ingrained from hundreds of repetitions.

Valdez did not flinch through two timeouts.

“I’ve been kicking for nine years and started in soccer,” Valdez said. “I trusted myself and my teammates who put their confidence in me.”

His kick, which pierced through the raindrops and toward oblivious travelers on Highway 99, was straight, strong and true with 28 seconds left. It sealed Ripon’s drama-filled 31-28 victory over Highland of Palmdale in a state final fitting of its title.

Fittingly, Valdez – the Indians’ reliable linebacker-offensive lineman who booted all four extra points and also punted effectively – accepted the tall CIF trophy and raised it with his right hand.

Ripon’s first state football title, clinched on its own Stouffer Field, will be remembered as one of the red-letter days in the school’s 109-year history. Twelve miles away, Trans-Valley League rival Escalon sealed the 4-A state crown with a 52-21 cakewalk over La Jolla. That gave the TVL, California’s toughest small-schools league, three state titles (counting Hilmar in 2018) within a calendar year.

All 31 Ripon points were scored by seniors, the unselfish group of nine, who carried the Indians to glory. When their 21-0 lead downsized to a 22-21 deficit, they answered with championship resolve.

“These kids stayed at a public school in Ripon and chose to compete with their friends and not transfer to private schools in other cities,” Ripon coach Chris Musseman said. “This is what can happen.”

Ripon liked its chances with Valdez, who won an important game with his foot last fall against Modesto Christian. One year later, his confidence had not wavered.

“Before the last drive, Nathan came up to me and said, ‘Muss, get me in range, I’ll make it,’” Musseman said.

Ripon started on its own 38 yard line and gained momentum on two Ilardi completions and grinding inside runs by Grant Wiebe (86 rushing yards, 2 touchdowns). A pivotal Highland interference penalty on third down advanced the ball to the Bulldogs’ 20, leading to Valdez’s swinging right foot four plays later.

“We’ve seen him make so many kicks,” said Ripon standout Danny Hernandez, whose 38-yard interception return for a touchdown put the Indians in front 21-0 during the second quarter. “We just needed to give him a chance.”

Valdez’s quality was recognized by the visitors who traveled 309 miles north for the title game.

“That 55 (Valdez) made a great kick. It was good all the way,” Highland coach Richard Lear said. “The interference call was touchy, but give Ripon credit for making the plays. It was a great game by both teams.”

Ripon’s special teams were the difference. Besides Valdez, the Indians built their early lead when Bonilla pounced on a muffed punt on the Highland 30. Six plays later, Wiebe pounded 7 yards and through a defender at the goal line to make it 14-0.

Valdez’ impact contrasted with Highland’s placekicking absence. The Bulldogs opted for 2-point conversions throughout the season, and they hit on two of four against Ripon.

But also glaring was Highland’s unsuccessful fourth-down play early in the game, when three points could have helped, from Ripon’s 14. After Highland drew even 28-28 on Isaiah Creech’s 14-yard run with 4:15 left, the 2-point pass fell incomplete.

“He (Creech) was so hard to bring down,” said Hernandez, Ripon’s physical free safety. “He was the toughest guy to tackle all season. Great leg-drive.”

Back-to-back passes to Jamison, beginning from Highland’s own 4, shook Ripon late in the half. A 37-yarder was followed by a double-reverse 59-yarder for the TD that closed the gap to 21-14. Joshua Clark’s short TD and 2-pointer gave Highland its only lead 22-21 midway through the third quarter.

The Indians later responded with a 62-yard drive featuring Ilardi’s 13-yard bootleg on fourth down. Early in the fourth quarter, Ilardi’s perfect pass found Troy Brogan in the end zone to regain the lead 28-22 early with 11:35 to go.

“We turned it back over to our quarterback in the fourth quarter,” Musseman said.

And in the end, Ripon turned to Valdez for the championship kick.