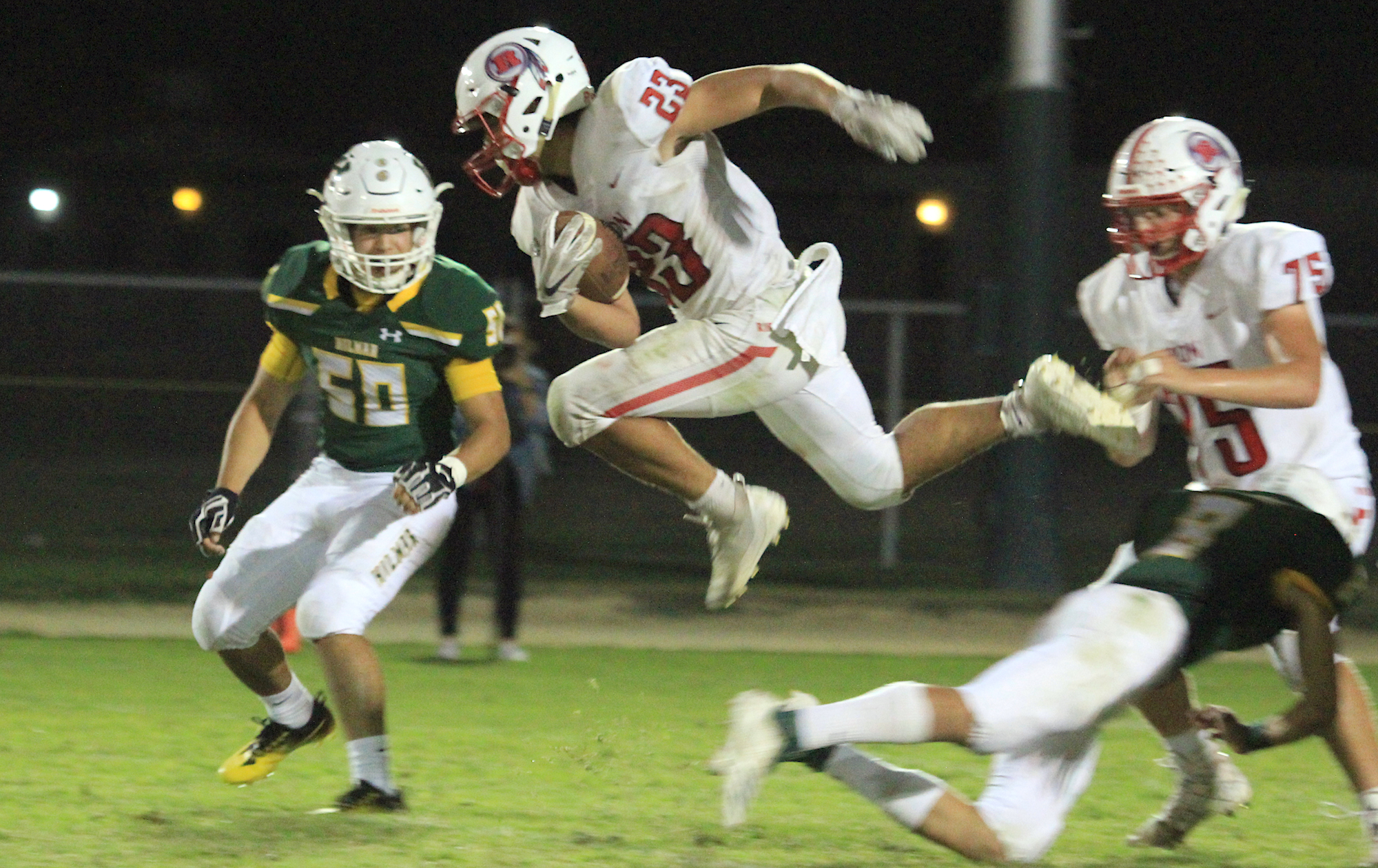 Ripon High senior Danny Hernandez, who's scored 20 touchdowns five different ways and leads the team in tackles, is one of the main reasons why the Indians have reached the CIF State 4-AA championship game. (Samantha Schmidt)

Call Danny Hernandez the Chief of the Tribe.

“The kid can do it all,” Ripon coach Chris Musseman praised. “He makes plays where there are none to be made.”

Perhaps it was the pick-6 that sealed Ripon’s pivotal 42-21 victory over Escalon on Oct. 18, or maybe it was the way he and his teammates contained Center quarterback Michael Wortham and fullback Legend Young in the Sac-Joaquin Section Division V final.  At some point – probably the opening kickoff of Game 1 -- Hernandez became Ripon’s beating heart on virtually every snap.

“I hear them (the opposing defense) say, ‘Watch 23! Watch 23!’ You hear that a lot,” Hernandez said this week. “Whatever I can do for the team, misdirection of whatever, I’m fine with that.”

Hernandez, a 5-foot-10 180-pound senior, covers a wide swath with “whatever.” On a team bursting with two-way versatility, he leads that category.

An easy prediction: If Ripon (13-1) beats Highland of Palmdale (12-3) on Saturday night in the CIF 4-AA title game at Stouffer Field, Hernandez will be one of the heroes.

What the numbers do not reveal is the required athleticism, preparation and old-school toughness. Hernandez, a running back/free safety, has passed the eye-test all season.

“You know about his offense. He’s one the best running backs we’ve ever had here,” said Musseman, referring to Hernandez’s 1,215 rushing yards and 332 receiving yards. “What he does on defense is unbelievable.”

Whenever it’s needed, Hernandez will step forward and work overtime as a linebacker. Such was his performance in the upset victory over Center, Hernandez was named Cal-Hi Sports Defensive Player of the Week.

“The guy has never done a linebacker drill, and on the first day he’s making better reads than the guys who’ve been doing it for four years,” Musseman said. “He just gets the game.”

And to think he was bred to play basketball.

Hernandez is the son of former Ripon High hoops star Chuy Hernandez (Class of 1980) and Shari (Fairbanks) Hernandez. His mom, a multi-sport inductee to the Cupertino High Hall of Fame, enjoyed a four-year basketball career during the 1980s at Stanislaus State.

And, by the way: Hernandez’s half-brother is Ripon basketball coach Justin Graham, probably Ripon High’s best-ever basketball player. Danny and several of his teammates will report to the gym next week.

Hernandez didn’t give football a try until sixth grade, and it wasn’t love at first sight. “I didn’t like contact that well when I started,” he admitted.

That changed, of course. He’s played through injuries the entire season and his durability carried the team while several Indians were sidelined.

“If you knew what he looked like underneath that uniform with all that tape and bandages, you’d wonder, ‘How is that kid doing it?’” Musseman said.

Hernandez and his eight senior teammates own that “it factor,” the intangible that defies failure and creates champions. How else to explain the victory over Escalon – a fellow state finalist – the dramatic comeback from a 27-3 deficit against Amador, the win over Center and last week’s 31-14 upset victory over Sutter for Ripon’s first Northern California title?

“The Escalon game proved how good we are and not to under-estimate us,” Hernandez said. “The Amador game showed we never give up.”

The common denominator, of course is Hernandez. The Chief.