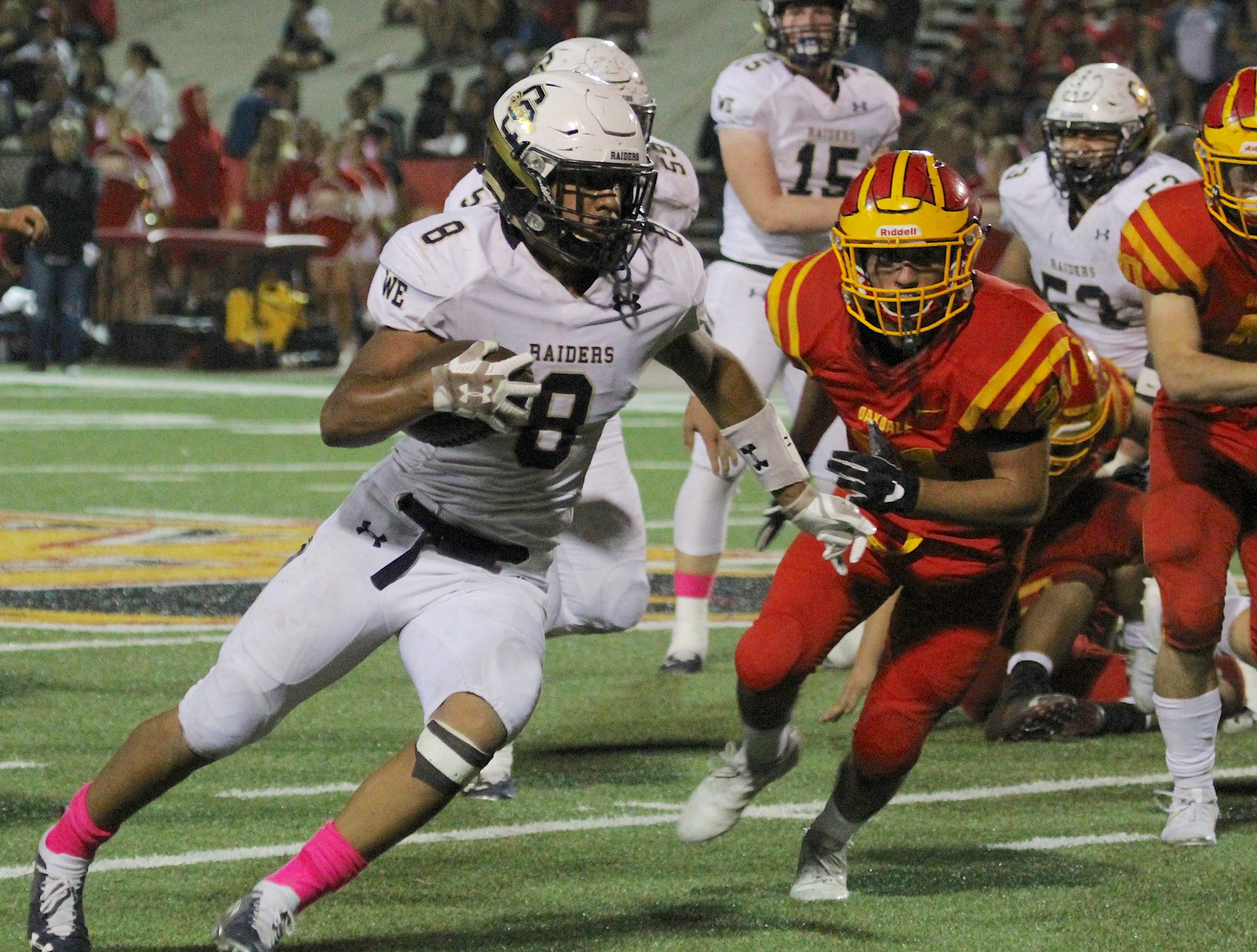 Central Catholic's Minaya Olivo (8) scored four touchdowns in a 54-14 victory over Oakdale on Oct. 26, 2018, at The Corral in Oakdale. (Samantha Schmidt)

'Clocked them at The Corral': How Central Catholic made quick work of Oakdale in the VOL championship game.

OAKDALE — The one that got away from the Oakdale High football program got off on Friday evening in the unofficial Valley Oak League championship game.

Junior running back Minaya Olivo scored four touchdowns, highlighting Central Catholic’s 54-14 victory over the Mustangs. The Raiders scored on seven consecutive drives in the first half to turn a battle of top-10 teams into a running-clock victory.

With the win, Central Catholic (9-1, 6-0) celebrated an outright VOL title and will likely be a top seed in the Sac-Joaquin Section Division II playoffs when the brackets are announced on Saturday afternoon. Oakdale (7-2, 4-2) backs into the postseason, stunned and embarassed by a rival it had two weeks to prepare for.

“We played as good as we can play, defensively and offensively,” Central Catholic coach Roger Canepa said. “Our kids were ready to go. The year before, I thought we played well. We had a couple of hiccups, but that was a game that got away from us. They beat us. They played four quarters and we played three.

“Tonight, we had to play four and be ready to go. They have great football program and it was Senior Night. We were just dialed in and made every big play there was.”

Central Catholic tied the series at 3-3 since 2014 and atoned for last year’s collapse with a quick-strike offense, stingy defense and an unheralded two-way talent who calls the Cowboy Capital home. Olivo carried the ball eight times for 106 yards and three touchdowns. He also had a 58-yard scoring reception to make it 47-7 at the intermission. His touchdown runs covered 1, 17 and 43 yards.

Dawaiian McNeely had 110 yards on 12 carries, Kyle Jacklich rushed for 100 yards on just four carries, and wide reciever Sithri Price, assuming a bigger role with Justin Traina out with a groin injury, had touchdown receptions of 56 and 74 yards.

Dalton Durossette was 5 of 9 for 238 yards and three touchdowns. Central Catholic scored five touchdowns in the second quarter on just eight plays.

Oakdale’s vaunted Wing-T offense never got out of first gear.

Zeke Saffar rushed for a game-high 169 yards, but the sophomore got a majority of his yards on two carries. He had a 65-yard run in the first half to set up Caleb Kuppens’ 13-yard touchdown reception. Saffar later scored on a 69-yard run with the game well out of reach.

The Mustangs had just just 7 yards on three first-quarter drives and didn’t record a first down until the nine-minute mark in the second quarter. The loss was Oakdale’s first to a VOL foe at The Corral since 2013, and it was a quick one.

“Clocked them at The Corral,” Canepa said. “We’re clicking right now. We got a good rhythm going; people are buying in; and we got good energy. I thought we looked pretty good tonight.”

Central Catholic now awaits the announcement of the Division II bracket. The section will reveal all seven division brackets in a selection show at 4:30 p.m. With nine wins and a competitive loss to national power De La Salle, Canepa believes the Raiders deserve one of the top-two seeds and a first-round bye.

“This is big. There is no possible way we can’t be a No. 1 or 2. We’re 9-1 and our only loss is to De La Salle,” he said. “We did everything we were supposed to do. We should get a one or two seed. I’d be very disappointed if we’re not at least the two.”