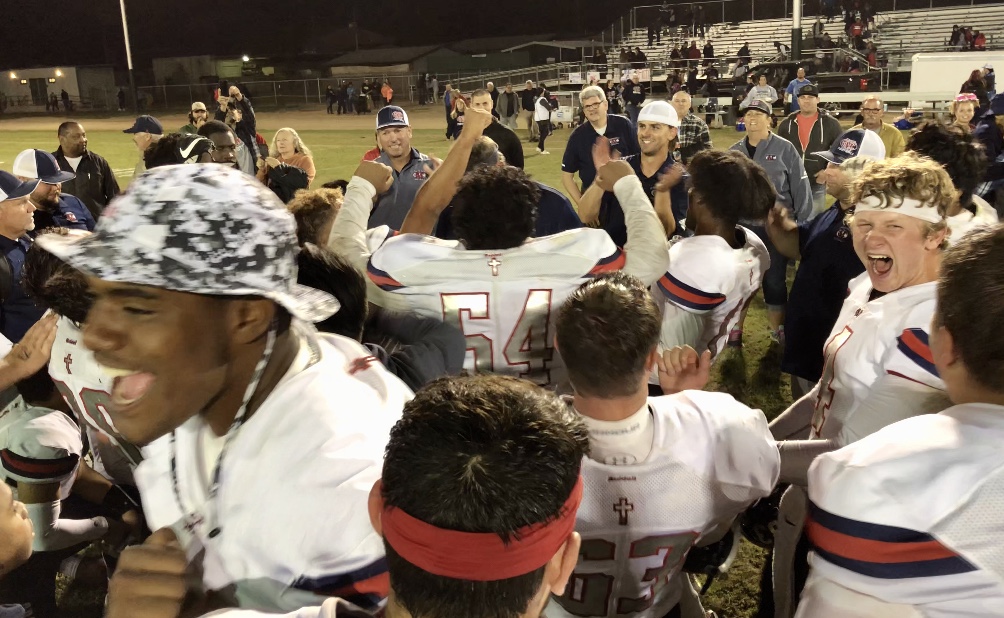 Modesto Christian celebrates a 24-21 victory over Hilmar on Oct. 12, 2018, at McSweeney Field in Hilmar. With the win, the Crusaders clinched at least a share of the Trans-Valley League title. (James Burns)

HILMAR — Isaac Schinmann had made just about every big offensive play for the Modesto Christian football team, except the biggest.

The versatile, hard-nosed senior scored two touchdowns and topped 100 yards receiving in the Crusaders’ 24-21 victory over Trans-Valley League rival Hilmar on Friday evening, but he dropped a wide-open pass on fourth down in the late in the fourth quarter to give Hilmar hope.

The Yellowjackets (6-2, 2-2) drove the field, converting a fourth down of their own to move into field goal range with less than a minute left. The kick never materialized, though, as the Crusaders’ defense preserved the win with a strip sack.

“I was so mad at myself for dropping that, but like our defense has been doing all year, I knew we were going to step up,” said Schinmann, who was brilliant otherwise. He finished with 171 yards from scrimmage and two touchdowns.

“Dillon Johnson made a huge play and … what a huge relief.”

Johnson sacked Ryan Teixeira along the home sideline, ripping the ball from his hand as they tumbled to the turf. Modesto Christian clinched at least a share of its second straight Trans-Valley League title, avenged a loss to Hilmar in last year’s Sac-Joaquin Section Division VI final, and will now have two weeks to prepare for Ripon (7-1, 3-1), which suffered its first loss of the season at Escalon (6-2, 2-2).

“That last play, we just put pressure on the quarterback and did our jobs,” said Johnson, the FrontRowPreps.com player of the game. “Great team effort. We knew were going to stand tall. We weren’t expecting a shutout or anything like that. We knew they had guys who could play — Isaac Sharp and (Justin Rentfro) — so we had to battle it out.”

The Crusaders (9-0, 5-0) take a season-long nine-game winning streak into their bye and will climb to No. 1 in the small-school poll for the first time all season.

Senior quarterback Hayden Sauser was 8 of 11 for 149 yards and a touchdown, while Jose Hernandez had 105 yards on 14 carries, four receptions for 35 yards, seven tackles and two deflected passes. He also booted a 31-yard field goal.

“It’s that dream team you want every year,” said Modesto Christian coach Mike Parsons, who noted his team was fueled by the naysayers who didn't think the Crusaders could topple a defending section champion without junior defensive end Xavier Carlton, who was serving a one-game suspension following his ejection against Livingston.

“We have to finish this thing,” Parsons added. “Enjoy it, take a three-day weekend, and we go back to work on Tuesday getting ready for Ripon.”

Modesto Christian allowed a season-high 21 points, but forced three turnovers and limited the Yellowjackets’ potent attack to just seven points in the second half. Sharp had 101 yards on 18 carries and closed Hilmar to within 24-21 with a 6-yard touchdown run with 1:02 left in the third quarter. Justin Rentfro, a battering ram, was unstoppable at times, racking up 125 yards and a touchdown on 16 carries.

However, the running lanes — like the Yellowjackets’ timeouts — evaporated on the final drive of the fourth quarter, forcing Teixeira to attack through the air. He completed two passes to Aiden Azevedo, including a 10-yard gain on fourth-and-8. Azevedo's 7-yard reception moved Hilmar inside field goal range.

After two runs by Sharp yielded just 3 yards, Teixeira rolled to his right and tried to evade pressure. Just when it looked like he might slip the sack and sprint up the sideline, Johnson latched onto his jersey.

And then the ball.

“My job is to pull the chain,” said Johnson, who defined “pull the chain” as coach-speak for “Go get the quarterback.”

“My job was to go hit him. I was able to grab the hand with the football and come out with it. It was a great feeling.”

The game had the makings of a shootout early.

Modesto Christian took control of the scoreboard with a big-play offense. Schinmann cut back, turning a play designed to gain 6 yards into a 52-yard touchdown on the Crusaders’ second play from scrimmage.

Jose Hernandez made it 14-0 on the next possession with a 64-yard touchdown run. Hilmar answered on the very next play as Teixeira found Sharp running alone in the seam for a 55-yard touchdown pass to make it 14-7 with 7:54 left in the first quarter.

Hernandez closed the first quarter scoring with a 31-yard field. The Crusaders covered most of the field on a 73-yard reception by Schinmann, who had four catches for 114 yards.

Schinmann completed the Crusaders’ scoring in the second quarter with an acrobatic 22-yard catch on third-and-9. With a defender on his hip, Schinmann left his feet for the catch and tumbled into the end zone to make it 24-14 at the intermission.

“On my first touchdown I saw a cut-back lane and I went. It was only supposed to be a 6-yard gain; it wasn’t supposed to be something crazy,” Schinmann said. “We did see something that we liked with the passes and we really took advantage of it this game — the deep shots.”