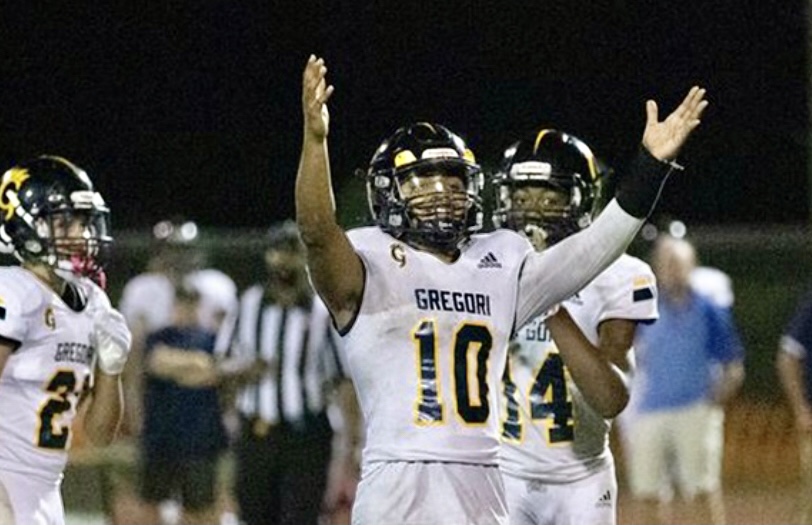 Gregori quarterback Cruz Marines (10) accounted for seven touchdowns in a victory over Enochs on Friday, Oct. 1, 2021. (Photo courtesy of Hudl)

Cruz Control: How a dual-threat QB knocked off an unbeaten football team

A wild 61-48 homecoming victory over previously unbeaten Enochs no doubt changed the mood, and the timing – the Central California Athletic League opener – could not have been better.

“We were disappointed in the weeks leading up to the game. We had too many mistakes with turnovers and dropped passes,” Gregori coach Lamar Wallace said Monday. “We told ourselves we still haven’t played our best football.”

The Jaguars (3-3, 1-0) took a step in the right direction against Enochs. Senior quarterback Cruz Marines, a bona fide run-pass threat, orchestrated big play after big play as Gregori built a 41-21 halftime lead. That was enough to hold off a determined second-half comeback by Enochs.

Marines caused major trouble for the Enochs defense, especially during the first half. He completed 11 of 14 passes for 220 yards and four touchdowns and also rushed for 133 yards and an additional three TDs. Simply, the 200-pounder is mobile and hard to bring down.

“Cruz is just a playmaker and took it upon himself to drive the offense. He took command of it,” Wallace said. “He made great reads and protected the ball. One tackle is not going to take him down. It will take a couple.”

The development of Marines, running back Jayden Miller and sophomore wide receiver Reggieon Foster (4 catches, 82 yards, 2 TDs) encourages Gregori. And about those preseason turnovers? The Jaguars committed only one against the Eagles.

NOTES – Central Catholic junior Roman Foumai checks in at 6-foot-2 and 420 pounds. He made an instant impact in his 2021 debut as the Raiders rallied in the second half to win at Oakdale 32-14. To no one’s surprise, he was hard to move in the middle of CC’s defensive front and clogged the Mustangs’ normally productive Wing-T offense. Oakdale (4-2, 1-2), which had averaged 51 points a game, was limited to only 25 yards in the second half. …

Modesto Junior College’s 32-7 loss at San Mateo produced some strange numbers. The Pirates (3-2), one of the state leaders each year in offense, managed only 147 yards as the Bulldogs held the ball for nearly 39 minutes. The MJC defense allowed only one touchdown, as CSM (5-0) padded its score with a punt return for a touchdown and six field goals. The Pirates, off this week, welcome West Hills for homecoming on Oct. 16. … Both Turlock (2-4, 1-0) and Downey (5-1, 1-0) are reaching top form going into their CCAL showdown Friday night at Downey. Turlock, stabilizing after a tough preseason schedule, blanked Pitman 35-0 last week for its eighth straight victory in the Harvest Bowl. The Knights overwhelmed Modesto 57-6 for their fifth straight win.