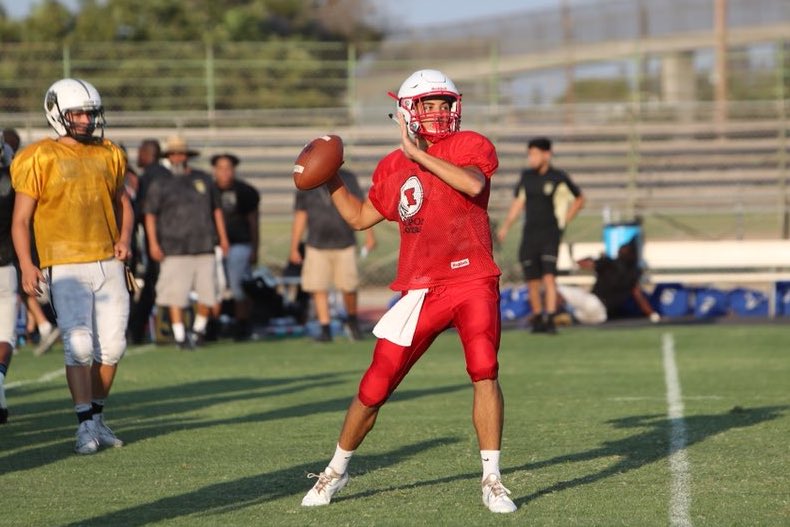 Ripon quarterback accounted for four touchdowns in the Indians' 34-0 victory at Sonora on Aug. 24, 2018. (Wayne Thallander)

SONORA — Ryan Daggett overslept and missed a team meeting, forcing the Ripon coaching staff to bench the star quarterback for the start of Friday’s showdown in Sonora.

The free-falling Wildcats (0-2) could have used a much stiffer penalty.

Daggett and the Indians (2-0) picked up where they left off in last week’s shutout of Weston Ranch, blanking the Front Row's former small-school No. 1 in their home opener, 34-0.

A season full of promise and potential in the Mother Lode is quickly spoiling with back-to-back shutout losses. Sonora was throttled in its season opener at Oakdale, 49-0, and then quickly faded against the reigning Trans-Valley League co-champions.

Daggett entered the game in the second quarter and brought with him a barrage of points. The Indians erupted for 20 points, all courtesy of the third-year starter.

A hurdles champion in the spring, Daggett showcased his breakaway speed with touchdown runs of 24 and 67 yards during the second quarter. He also threaded a 52-yard touchdown pass to Nico Illardi, who started under center while Daggett served his penalty.

Daggett was 3 for 5 for 86 yards, including a 31-yard scoring strike to Danny Hernandez in the fourth quarter. He also had 104 yards on just seven carries.

With a team as fast and athletic as any at the small-school level, Ripon has overwhelmed its first two opponents in all three phases of the game. Eight different players carried the ball in the victory over the woeful Wildcats and the defense forced one fumble and blocked punt. Brandon Rainer completed the scoring with a 46-yard burst in the third quarter.

Ripon hosts Central Valley next Friday, while Sonora’s nonconference gauntlet continues with a visit from Escalon, No. 2 in this week’s small-school poll and another reigning champion in the TVL. The Cougars improved to 2-0 by outlasting Calaveras, Sonora’s chief competitor in the Mother Lode League, 21-7.

The Manteca Bulletin's Jonamar Jacinto contributed to this report.