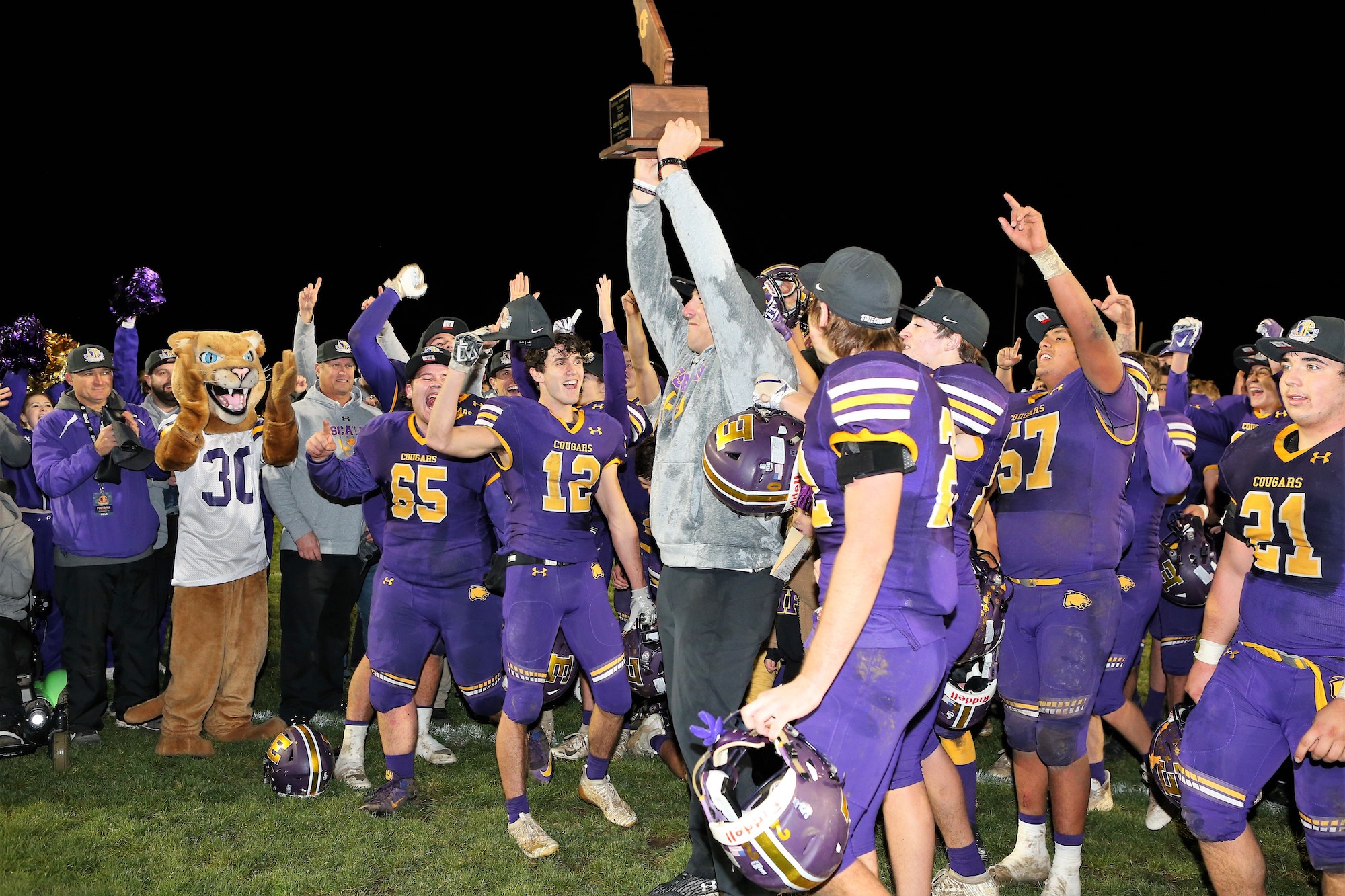 Kaden Christensen bounced between hugs and embraces in the locker room, while coach Andrew Beam stood near his office and tended to the emotion on his eyelids. Meanwhile, in the team room, the CIF State trophy traded hands and photo opportunities.

Escalon’s 52-21 victory in the CIF State Division IV-A Bowl covered the full spectrum of emotion, except for one: Suspense.

The Cougars ran wild against La Jolla in Saturday’s highly-anticipated season finale. Escalon (14-1) led by 24 at the intermission and then running-clocked the Vikings (10-5) in the second half.

“Small-town football is one to be reckoned with,” Beam said. “Our town, our community and our support is second to none.”

Luke Anderson, Colton Panero and Christensen, the stalwarts in the Cougars' Wing-T attack, rushed for more than 100 yards as Escalon savored a unique accomplishment on the CIF State stage. The Cougars book-ended the decade with CIF State championships against San Diego schools. In 2010, the Cougars defeated Madison in a driving rain in Carson. Ten years later, Escalon whipped La Jolla, taking charge with a 17-0 spurt to start the contest.

"It's a dream come true," Panero said. "I've been playing for 10 years and this was always the end goal."

Christensen and Anderson, a lightning-and-thunder combo, scored three touchdowns apiece, while Panero, an unheralded wingback, also found the end zone. Not surprisingly, Escalon found traction on Engel Field's slick natural surface. La Jolla, on the other hand, had trouble adjusting to the conditions. The Vikings hadn't played a game on natural grass all season.

“We knew it was going to be tough,” La Jolla coach Tyler Roach said. “They’re good — damn good at (the Wing-T). They set fast and we knew we would have trouble there. This field, there’s no excuse, it’s terrible and we were slipping and sliding everywhere.”

The Vikings, led by quarterback Jackson Stratton and linebacker Dirk Germon, annexed Eastern League, San Diego Section D-III and CIF State Regional titles, sometimes in thrilling fashion. The Vikings earned their seat in the state playoff with a touchdown and two-point conversion in the final seconds of the section final.

There was little drama on a chilly Saturday evening in Northern California’s Central Valley. If La Jolla felt like it was playing an entire region, it was. An overflow crowd,  dressed in mostly purple and gold, filled the stadium three hours before kick off. Fans began sitting in lawn chairs outside the school’s gates around noon.

If Escalon was quick to arrive, La Jolla was late.

The Vikings didn’t break into Escalon’s side of the field until midway through the second quarter. Stratton (19 of 32, 224 yards and two TDs) connected with Makai Smith on a 31-yard pass down the visitor’s sideline. The sophomores would finish the drive, too, hooking up for a 14-yard touchdown to trim Escalon’s lead to 17-7.

La Jolla forced a fumble on the next drive, but the momentum was short-lived. Escalon rebuilt its lead with a 27-yard touchdown run by Christensen.

“We imposed our will on them,” Christensen said.

As the game spiraled quickly away from La Jolla, Escalon chased a new goal in the second half -- helping senior wing Colton Panero reach 1,000 yards. Panero eclipsed the milestone with an 8-yard run in the fourth quarter, becoming the Cougars’ third 1,000-yard rusher.

“It was something we wanted to achieve. It’s something that kid deserves for how hard he plays and how hard he words,” Beam said. “To get him to 1,000 was just awesome.”

Anderson, who also reached 1,000 yards with a first-quarter run, finished with 192 yards on 15 carries. His touchdown runs were the stuff of fullback glory. He plowed through La Jolla for touchdowns runs of 45, 24 and 14 yards, the latter of which came one play after Panero’s milestone run. Anderson embodied the gross mismatch. The 210-pound fullback picked on La Jolla defenders, dragging, pushing and stepping over tacklers.

Escalon rushed for 443 yards and six touchdowns on 45 attempts.

Panero finished with 118 yards and a 20-yard touchdown. Christensen rushed for 133 yards and two touchdowns on 15 carries. He also scored on a 42-yard touchdown pass from Ty Harris with fully-stretched dive over the goal line.

“It’s a special backfield,” Beam said. “Very unselfish guys. Guys that play for each other and that includes every lineman up front.”