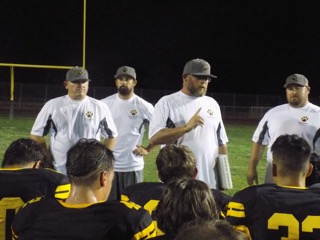 HUGHSON — Defense led the way in Hughson's 21-3 victory over Argonaut.

The small-school No. 9 Huskies had to make some adjustments after losing star running back Carlos Arreola (knee) in a 27-24 loss to Orestimba last week.

“It was a great team win for us after coming off that loss last week at Orestimba,” said Shears, the FrontRowPreps.com Player of the Game. “We knew we had to step up as a whole after Arreola went down last week.”

Steven Morris sealed the win in the fourth quarter with a 3-yard quarterback keeper. Shears had 94 yards of total offense, including 43 on the ground and another 51 through the air.

“We played like warriors all week long,” said Hughson head coach Shaun King. “Last week was a tough loss, but we came together as a defense and were like those old purple people eaters.”

Hughson travels Summerville next Friday, while Argonaut ventures into the Bay Area to face Stellar Prep.