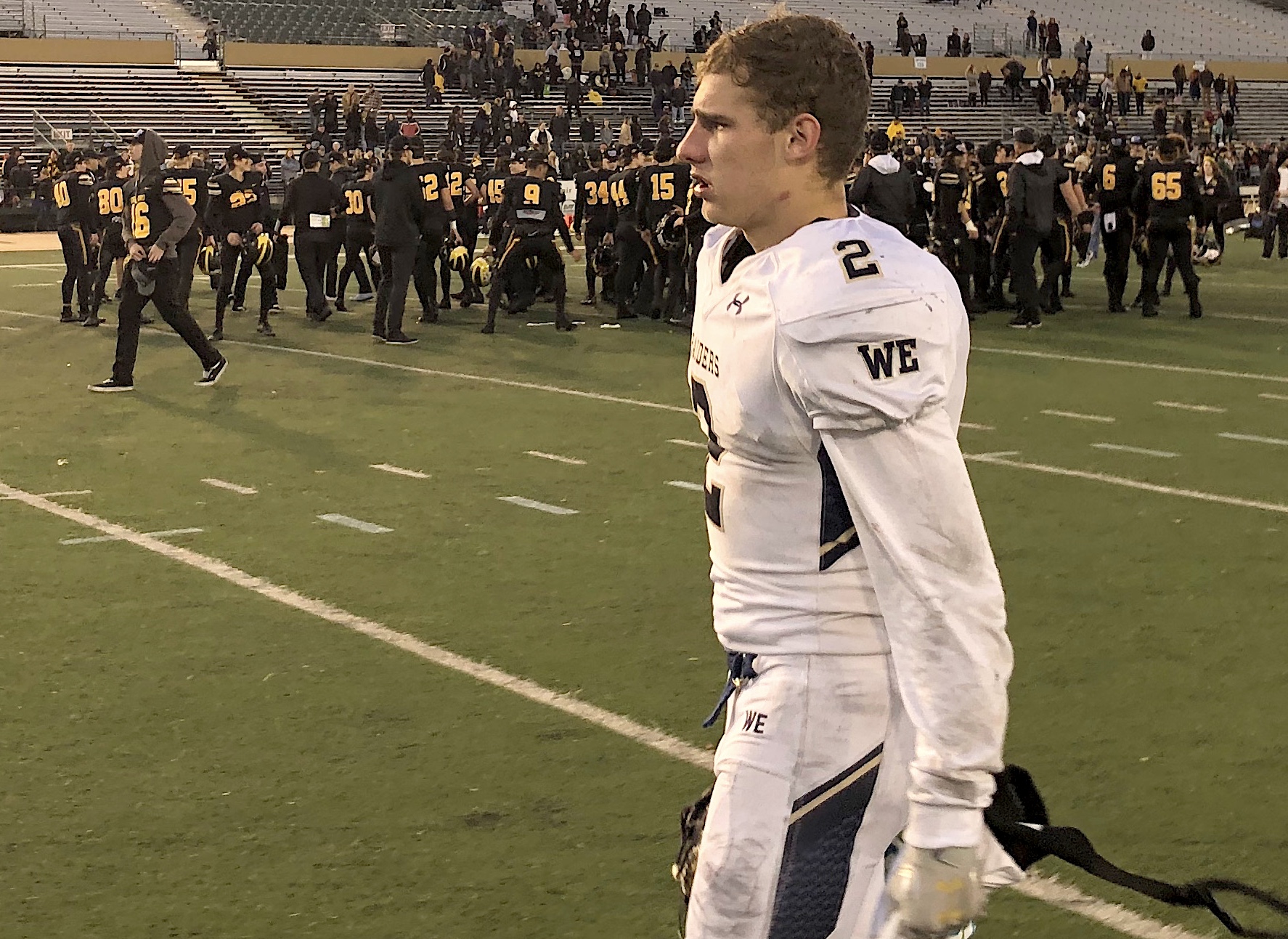 Central Catholic running back Kyle Jacklich, whose fumble late in the fourth quarter was picked up and returned for the winning score, walks back to the Raiders' locker past the jubilant Del Oro Golden Eagles. Photo by Joe Cortez/Front Row Preps

SACRAMENTO -- Kyle Jacklich was the last Central Catholic football player to make the long walk from the Raiders’ sideline to the visitors’ locker room, his teammates long ago leaving the field, not wanting to stick around to watch Del Oro celebrate its 20-17 come-from-behind victory over the Raiders in the CIF Sac-Joaquin Section Division II title game.

Jacklich was left behind only because he opted to stay behind, answering every question directed toward him by members of the media.

Reporters wanted to ask him about the second of his two fumbles.

With 1:52 remaining the contest, the top-seeded Golden Eagles’ Matthew Smart scooped up a Jacklich fumble and returned it 42 yards for a touchdown to put his team ahead 18-17, with a successful two-point conversion just moments away.

“This program prides itself on the ‘we’ philosophy,” said the 6-0, 175 junior running back/defensive back. “Me fumbling that ball kind of makes me feel like it was my fault. I take full responsibility for not protecting that ball.”

By Jacklich’s math, he personally handed the Del Oro football team half of its points. He mishandled a punt that the Golden Eagles recovered on the Raider 12, which resulted in a 30-yard field goal by Ryan Whalley that narrowed Central Catholic’s lead to 10-6 with 9:05 to play in the third quarter, about five minutes before Raiders’ starting quarterback Dalton Durossette was ejected for what the officials called a punch.

Despite the initial shock of losing Durossette, the Raiders defense responded by pinning the Golden Eagles (12-1) deep in its own territory, forcing a punt from the 3 and giving CC the ball on the Del Oro 35, leading to a two-yard blast by Jacklich that made it 17-6 with 11:07 in the fourth quarter.

But the Golden Eagles scored with 6:28 to play when quarterback Carson Jarratt found Dawson Hurst for a 9-yard score that made it 17-12 after the two-point conversion attempt failed.

Central Catholic now just needed to run out the clock to win its first Division II since 1982 and what would've been the school's 20th section title in its 23rd title-game appearance. Del Oro, now with 12 titles in 18 trips to the championship game, is the second-winningest program in section history.

With 4:22 to play, the Raiders faced fourth-and-inches on its own 30 and went for it, picking up two years on a sneak by backup Kyle Jackson, who shared the starting job with Durossette in the preseason.

About 40 seconds later, Central was flagged for a delay of game, stopping the clock with 3:41 to play and bringing up second-and-13. But Jacklich’s 17-yard gain moved the chains and gave the Raiders another opportunity to milk the clock. Less than two minutes after that, disaster struck.

“We were trying to run the clock out,” said Central Catholic head coach Roger Canepa. “That sweep, you know, it’s a pretty safe play. Hand it off, run the cock. We weren’t going to get a first down there, be about a 1:56, punt it … guy hit the ball out, runs down the sideline, you lose. Just like that.”

Dante Pericin stripped the ball from Jacklich and Smart got a room-service bounce that allowed him to recover the ball in full stride.
“I was the corner backside and it was a stretch all the way,” said Smart, a 6-2, 185-pound senior. “I just chased it down and tried to prevent the touchdown, ball popped loose, big hop, I snagged it, one defender, I shook him off and I was just running.”

The Raiders went into their two-minute offense, but Jackson didn’t get any reps in the drill during practice and the Raiders’ desperation drive ended with an interception.

As Del Oro ran out the clock, Jacklich stood off by himself on the sideline, shaking his head and fighting back tears. His high school football career was mere seconds away from being  over, when it probably should’ve had at least one more week of life.

“We were that close.”