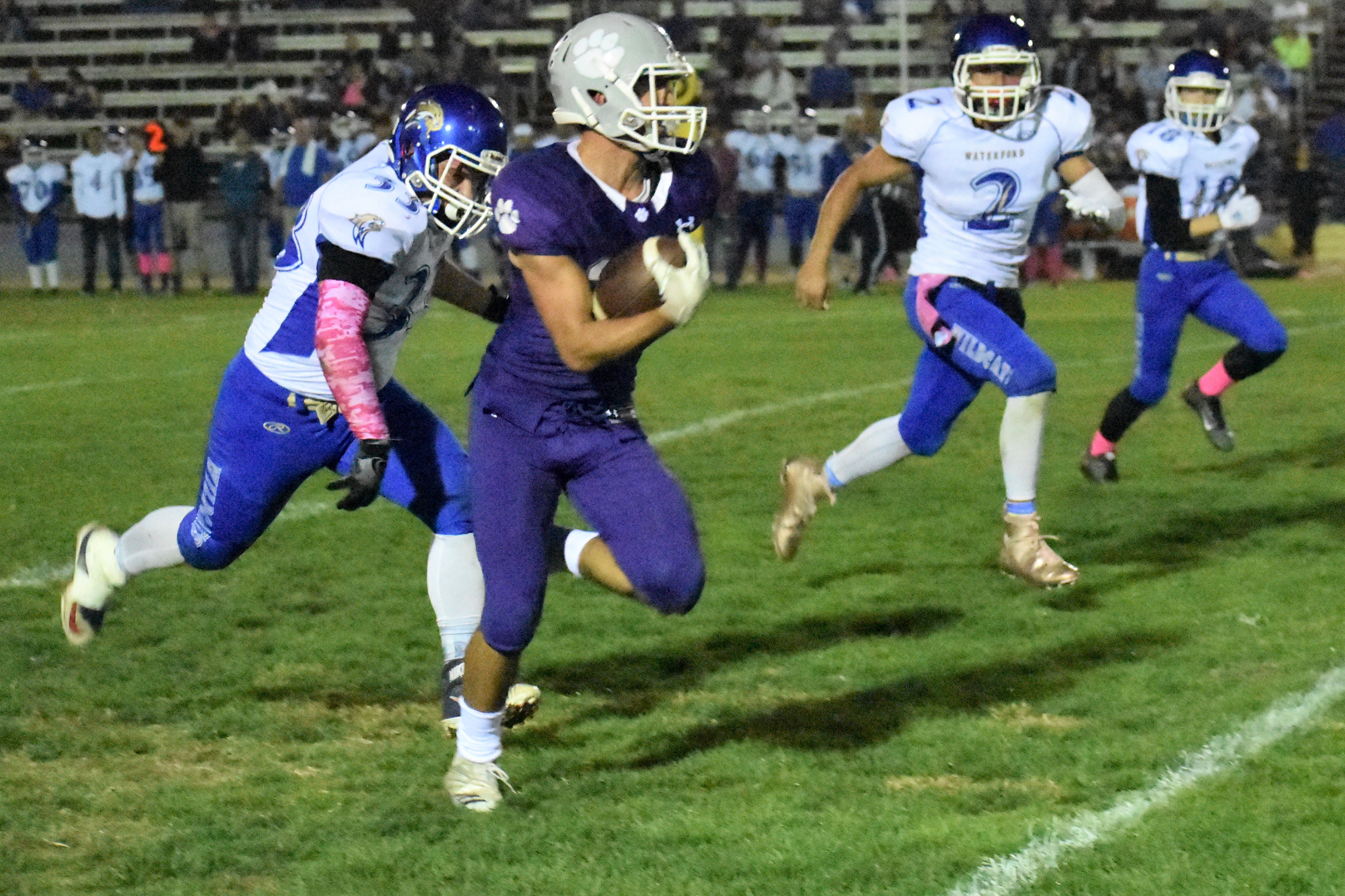 FILE PHOTO: Denair's Hunter Musgrave sealed the Coyotes' victory over Golden Sierra in the Sac-Joaquin Section Division VII final with an interception return for a touchdown.

Curtiss, now an assistant at Pitman High in Turlock, wanted to take a picture with “my boys,” as he called them, gathering four members of the Denair coaching staff, including head coach Anthony Armas. All four once played for the coach who took the Coyotes to their first championship game in 1998.

Curtiss got his photo then melted into the background. Though he taught the game to the men responsible for bringing Denair its first banner, it was their moment, and the old mentor knew it.

“To be the first football team ever to win a section title is a big deal,” said Armas, in his fourth season as head coach of the Coyotes (11-1). “I graduated in ’97 and through the 90s it was a big football town, and to see that start coming back is kind of nice.”

Armas was an assistant with Curtiss at Pitman when he took the job prior to the 2015 season. Things were so bad in Denair that one Friday night the Coyotes finished a game with just 12 players … as in one player on the sideline.

Before taking the job, Curtiss asked his former player, “Are you sure you want do that?”

Steffin Winston scored three rushing touchdowns, including a nail-in-the-coffin pick-six with about 30 seconds left in the contest. Actually, it wasn’t so much a nail in the coffin as it was a nail in the wall, with which the Coyotes can hang their new blue championship banner.

Just about 90 seconds earlier, Hunter Musgrave had intercepted a pass and returned it 91 yards to give the 37-21 lead with 2:05. That was the real clincher. Winston’s pick-six was window dressing.

The Coyotes (11-1), whose only loss this season came to undefeated D-VI finalist Ripon Christian in Southern League play, will face a to-be-determined foe in a Northern California regional bowl game.

And while the Trans-Valley League garnered much of the accolades this year for being the “it” conference, it’s the Southern League with two teams still playing. Ripon Christian will take on Hilmar on Friday night at 7:30 at Turlock for the D-VI banner.

“It’s great,” said Armas of leading his alma mater to its first banner. “There’s no place I’d rather have done it. … Most of our staff are Denair guys and the ones who aren’t, you’d would they’re Denair guys they’re so involved in everything.