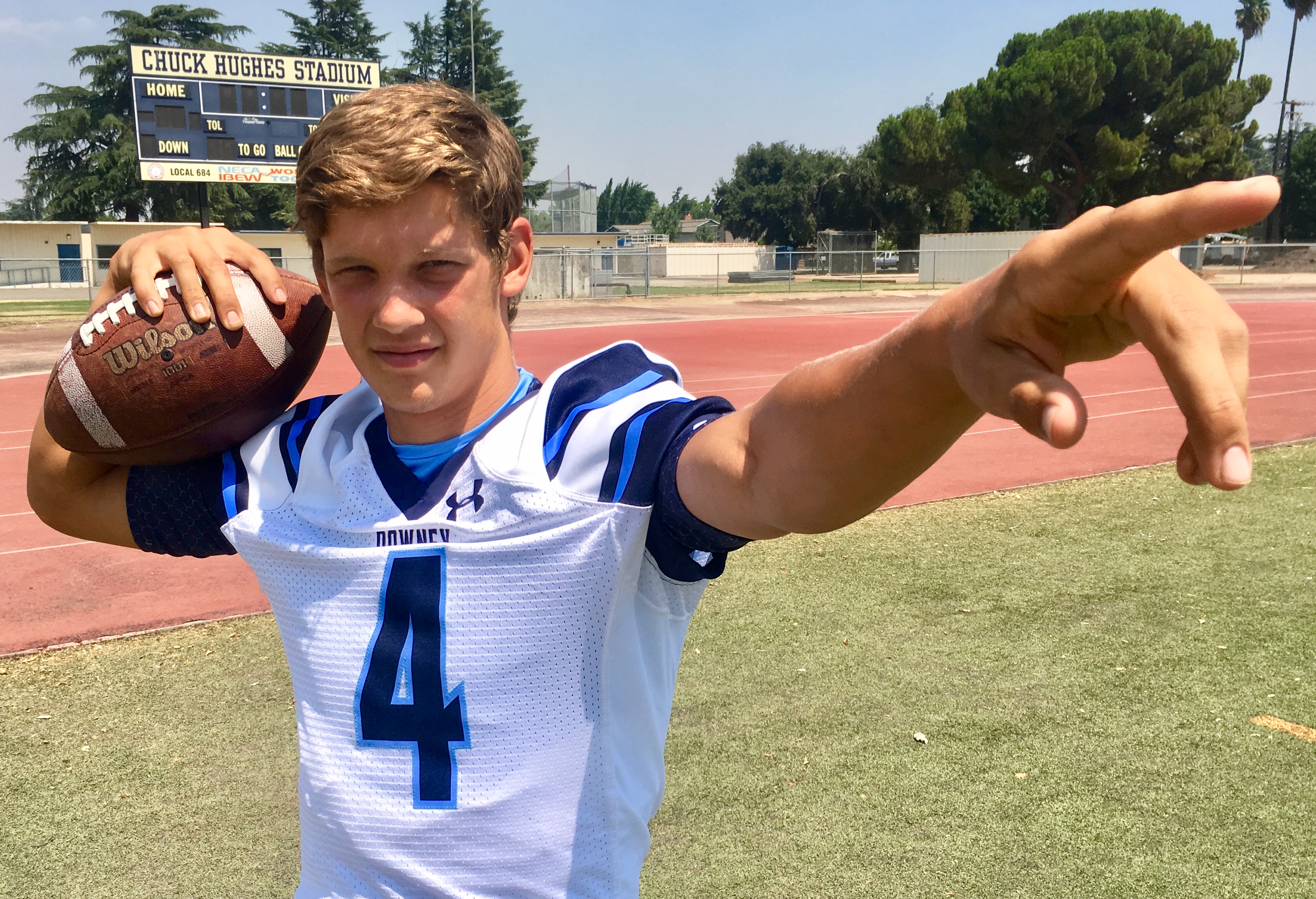 'Didn't feel like they could stop us.' Downey's confidence - and ranking - soar

Instead, a freshman quarterback marched the Knights down field — and into the win column — flourishing in an end-game scenario that has paralyzed many.

Downey doesn’t just live for these moments. They’ve lived them. Over and over again. Every Wednesday, the offense lines up at the 50-yard line of the practice field with one minute on the clock, one timeout in pocket, and one mandate: Finish the drive in the end zone, scoring on a defense that knows the plays you’re about run.

“It comes down to execution,” said senior Anderson Grover, who leads the region in receiving with 223 yards.

So what transpired in the final seconds of last Friday’s 44-42 victory at Manteca wasn’t gutsy or a fluke. It was easy money, says Grover. Heralded freshman quarterback Beau Green scored his third rushing touchdown of the night, charging in from the 3 with 12 seconds left.

“It felt way easier than it did in practice. Our defense knows what we’re going to do,” Grover said. “We run that same scenario every Wednesday. We rep that stuff out. We were comfortable and Beau was feeling really good at that time. I didn’t feel like they could stop us. It was like, ‘We’ve done this. We’ve succeeded at this. There’s no pressure. No sweat — let’s just have some fun.’ ”

With the win, Downey (2-0) flip-flopped places with Manteca (1-1) in the Front Row’s large-school rankings. The Knights are the new No. 2, but won’t have time to celebrate. That ranking will be challenged Friday by another large-school title contender.

Yes, the schedule stiffens for Downey, who host No. 5 Merced (2-0) at Chuck Hughes Stadium. The Bears have toppled Del Campo and Gregori utilizing a similar script: rotating QBs at the helm of high-scoring offenses.

The Knights traded series with Green and junior Bryce Gouker in the first half against Manteca and then stayed with Green down the stretch. The Bears attack defenses with dual-threat Dhameer Warren and Junior Garcia, who was 12 of 14 for 261 yards in last week’s win over Gregori.

Though the Knights remain unsettled under center, it’s not unsettling for the boys in blue. Peterson, a UC Davis-bound wide receiver who made a sensational one-handed, gloveless grab in the season-opener against East Union, says the offense is designed for both to flourish, depending on matchup and scenarios.

“In the moment of the game, you don’t notice who is in or not. You just have to do your job,” Peterson said. “Do your job and trust your teammates will do theirs.

“We have multiple ways that we’ll be running the offense to expose the soft spots in their defense,” he added. “We have a lot of great athletes on both sides of the football, so we can do a lot of things.”

With the retirement of former Escalon coach Mark Loureiro, the section’s all-time winningest football coach, Merced’s Rob Scheidt is now the longest tenured coach in the region. Scheidt is 16-2 against Modesto City Schools teams in his career.

That kind of years-long domination doesn’t intimidate the Knights, who stared down similar odds against the Buffaloes, a two-time defending section champion. After the thrilling comeback, a Downey alumnus thanked Peterson for doing what he never could — beat the Buffs.

“(The schedule) has challenged us to work harder and work together, and it has showed our strengths,” said Peterson, who has 10 catches for 102 yards. “It’s showed people that we aren’t the underdogs; that we can play more challenging teams.”