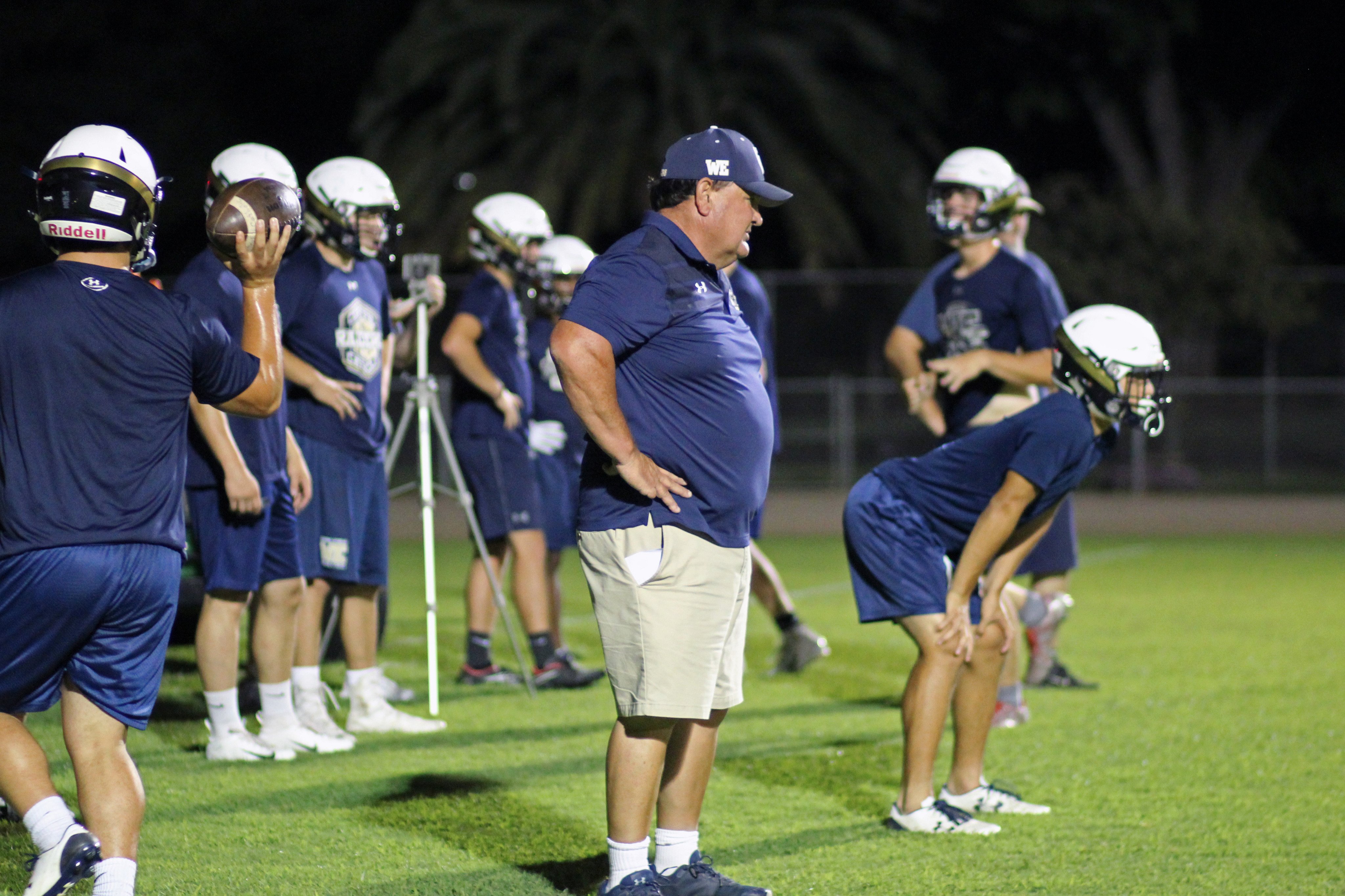 Central Catholic coach Roger Canepa has a talent-rich starting lineup, but depth is a genuine concern as the Raiders take on arguably the toughest schedule in regional history. (Samantha Schmidt)

Dog's day ahead? Turlock closing the gap with perpetual preseason No. 1 CC

1. Central Catholic (2): The Raiders have the weapons to become the region’s first Sac-Joaquin Section Division II champion since 2001 (Manteca) and some believe the team’s starting lineup is as strong as the program’s greatest teams, but optimism along Carpenter Road is tempered by a nervy lack of depth and a demanding non-conference schedule. Friday: vs. Clovis West.

2. Turlock (10): Under coach James Peterson, the Bulldogs have risen to power in the CCAL and closed the gap with perpetual preseason No. 1 Central Catholic, a private school. With experience everywhere, including Cal-bound offensive lineman Everett Johnson, and Tamirr Bullock and Jayden Jackson, the CCAL’s top defensive players, Turlock’s ceiling is as high as it has ever been. Friday: vs. Freedom.

3. Manteca (17): Offensively, the Buffaloes are as talented as any team in the Sac-Joaquin Section. Manteca returns a scary three-headed monster -- quarterback Ryan Ward, a Pacific pitching prospect; 1,000-yard running back Trabron Russell; and reigning VOL Offensive Player of the Year Jacob DeJesus. The Buffaloes should be able to throw punches with anyone. Friday: vs. Lathrop.

4. Oakdale (49): Trent Merzon has a quarterback he likes, a stable of running backs, leadership along the offensive line, and a defense peppered with returning all-conference talent. The Mustangs’ longtime head coach has achieved more with less, which should tell you everything you need to know about the perennial VOL and section champion. Friday: at Sonora.

5. Buhach Colony (38): The Thunder have high hopes this fall and will look to usurp Merced atop the CCC. Buhach Colony possesses two electric athletes -- Cal-bound cornerback/wide receiver Trey Paster and cornerback/running back Youlas Dickson. Can the much-ballyhooed seniors return BC to the winner’s circle? Friday: at Gregori.

6. Downey (15): The Knights return the region’s top quarterback in senior Bryce Gouker, whose experience and command of the offense should light up the scoreboard even with a set of new go-to receivers. The concern is never about Downey’s offense. Can its defense help turn shootouts to blowouts? Friday: at East Union.

7. Patterson (57): Patterson is coming off a seven-win season, and the sophomore class that shouldered much of the load is back, including road-grading linemen Logan and Boss Foumai, quarterback Logan McCleery and running back Jordan Imada. Friday: vs. Tokay.

8. Gregori (31): On paper, the Jaguars have the talent and numbers to contend in the CCAL. However, first-year coach Lamar Wallace, a longtime assistant, understands trophies aren’t awarded for potential. Wallace says Gregori must earn its accolades, and he’s looking to players like Baker Melendez and Titus Rhiney to be torch bearers. Friday: vs. Buhach Colony.

9. Los Banos (65): Coach Dustin Caropreso likes his team’s chances in the weakest of the region’s large-school conferences. The Tigers’ hopes are buoyed by the return of 1,000-yard running back Justin Incaprera and linebacker Adrian Atangan, the team’s top returning tackler. Friday: vs. Dos Palos.

10. Pitman (42): With heavy graduation losses and a new head coach, the Pride have undergone a complete makeover after a historic season, but there is hope rookie coach Brandon Weckerle and the junior class can find traction in 2019. Friday: at Clovis North.