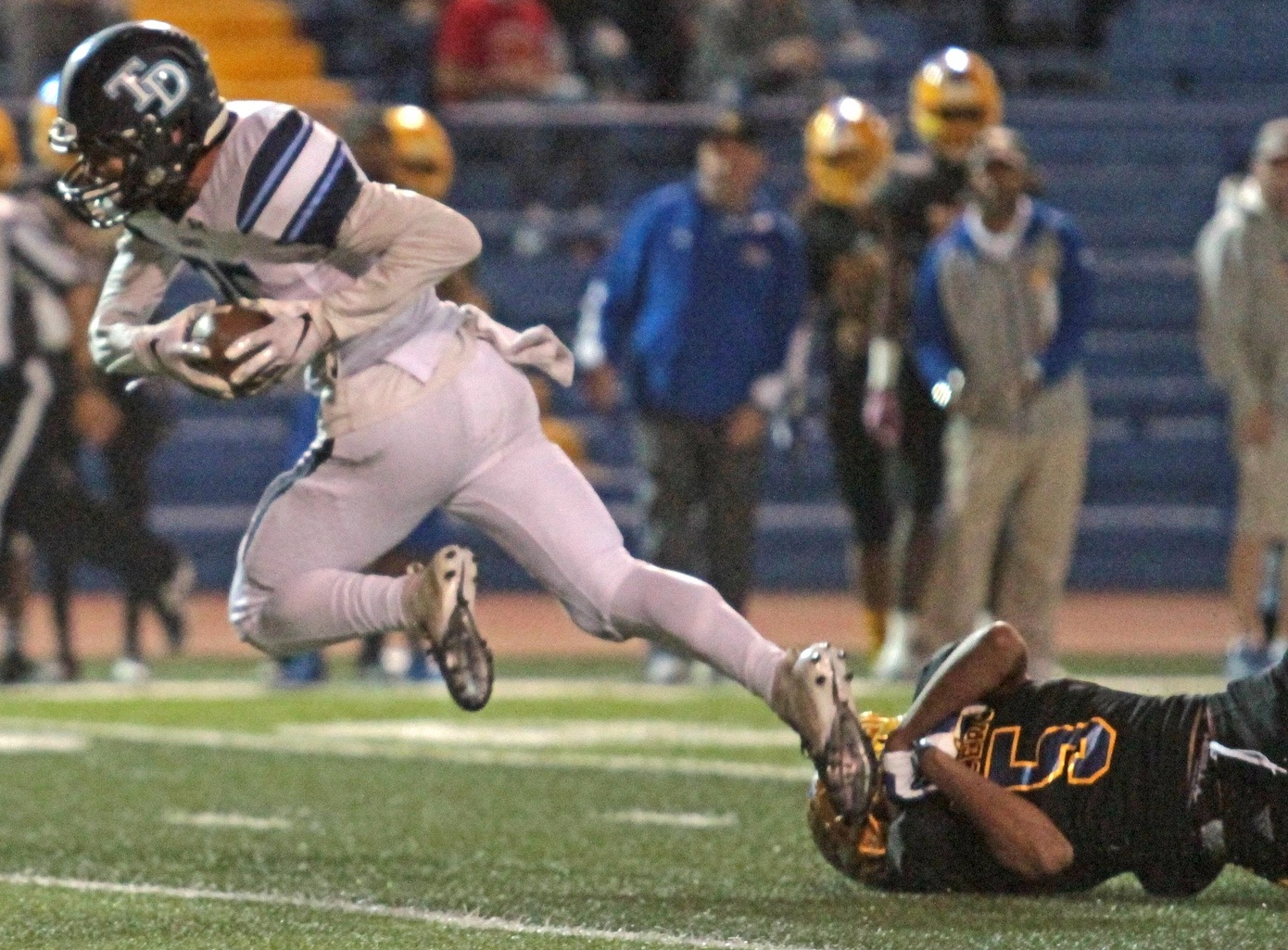 Downey wide receiver Anderson Grover scored three touchdowns in a 57-27 victory over Grant on Nov. 2, 2018, in the first round of the Sac-Joaquin Section Division II playoffs. (Daniel Harris Photography)

The 11th-seeded Knights pummeled No. 6 Grant in the first round of the Sac-Joaquin Section Division II playoffs, 57-27. The Pacers (5-6) played without 10 players, including eight starters, after they were suspended by the section for participating in an on-field brawl with Whitney last week.

Grover’s touchdown receptions covered 10, 75 and 29 yards. UC Davis-bound wide receiver Bryce Peterson also had a 49-yard scoring grab for the Knights, who picked up a rare win over the Sacramento-area power.

"My coaches reminded me after the game that this was one of our goals. We lost to them in 2013 and 2014, and we knew we were going to get them every year until we beat them -- and we would go to Grant every year until we beat them," Downey coach Jeremy Plaa said. "This had to be the goal for our program, to beat Grant. Whether they were missing guys or not, we accomplished one of our goals."

Plaa said his team was confident it could beat Grant, even at full strength. When the section announced its suspensions, internally, the Knights' confidence soared.

"Our kids were dialed in Monday and we thought we could do this. We still felt like we hadn't played our best game, and we played a tough schedule," he added. "We thought their defense wasn't quite as good as McClymonds', and the offense wasn't as good as Merced's. We thought we could do this. When (the suspensions) actually happened, it was a bit of a confidence booster. We already thought we had this, now let's go get this done."

Jordan Wilson rushed for two touchdowns, while backfield mate Robert Rivera also totaled two TDs. Rivera scored once on the ground and once through the air for the Knights, who became the first Modesto public school to win on the road in the playoffs since Davis in 1999.

That year, the Spartans won back-to-back games on the road to open the Division I playoffs. Davis surprised Vacaville in the first round and then clinched a semifinal berth with a win at St. Mary’s. The Spartans' Cinderella run was eventually stopped by Golden Valley of Merced, then a rival in the Central California Conference.

Can Downey match the feat? To do so, the Knights will need to beat No. 3 Inderkum.

With Friday’s win, Downey avenged playoff losses to Grant in 2013 and 2014. It was also the worst home playoff loss in Grant coach Mike Alberghini’s decorated career.

"This helps with our momentum," Plaa said. "The kids have a notch on their belt now, knowing they can get this done. Inderkum is the same type of team. We have to go back onto the road."