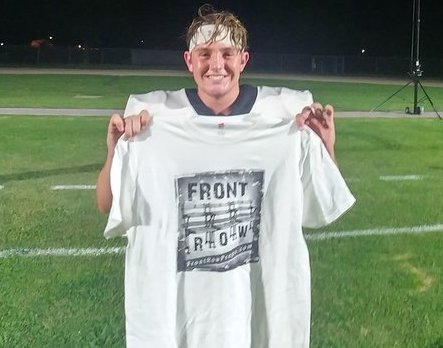 CERES — Enochs quarterback Ben Harless powered his team to a 28-22 victory over Central Valley with a last-second, 20-yard pass to Kameron Myers, completing the wildest comeback of the season.

The Eagles scored 14 points in the final 19 seconds of regulation, snapping a two-game losing streak with the most improbable of wins. Enochs trailed 22-14 when it got the ball back with a minute left, but cut the deficit to two on Jose Guizar's 2-yard rushing touchdown with less than 20 seconds remaining. Harless tied the game at 22s with a two-point conversion run.

The Eagles picked up their own onside kick at about the 45-yard line with little time remaining. Using his arm, Harless moved Enochs to the 20 with 4 seconds left, racing to the line scrimmage to spike the ball and stop the clock. Harless then threw a 20-yard 'Hail Mary' pass to Myers to walk-off on the Hawks.

“All I was thinking about in those last 5 seconds was keeping my composure,” said Harless, the FrontRowPreps.com Player of the Game. “We got some things to work on heading into our bye.”

Central Valley started the fourth quarter off quickly with a 53-yard Isaiah Hidalgo rushing touchdown to extend its lead to 22-8. Harless started the comeback with a 2-yard quarterback keeper to draw the Hawks lead to 22-14.

“We knew our guys were capable of getting the job done, and sure enough, they pulled through for us tonight,” said Enochs coach James Stacy. “Were going to keep on working hard and clean up the mistakes we made in this game.”

Central Valley (1-3) has lost three of its first four games and faces an uphill battle in its Central California Conference opener against undefeated Merced (4-0), No. 3 in the FrontRowPreps.com large-school ranking.

“Sad to see the game end this way for our players,” said Central Valley coach Scott Edwards. “We got Merced next week and were going to look to clean up our mistakes we made in practice.”